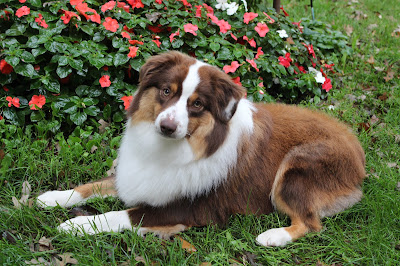 He is very focused on his people, although sometimes he is happy to see me.   He is pretty much a two person dog.  He can take or leave the rest of us.  He does listen to me...which is a good thing.  He is a center console hog when he is in my vehicle...and then he leans into my shoulder....mostly he is a good co-pilot.  He visits us often...one thing that calms him down is scratching his back..it relaxes him.  He heels off lead for my brother...which is a good thing.

Far Guy is feeling much better. He says it is wonderful to breathe again after feeling like he couldn't breathe for three months....he says it felt like he was dying.  He is working on getting back in shape again...walking and using his weights.  He is back to cooking again and can do all the dishes without sitting down to rest.  Yesterday he even worked on his new/old car.   We hope he continues to improve and get to the point where he was before May 10 2021and the valves.  Many people can breathe much easier with the valves... BUT they are not for everyone.   It was worth a try.

My left thumb is slightly improved....it doesn't have a constant ache.

We have a busy week coming up; a couple of appointments, bookclub and one last day of a garage sale at my parents.