We were gone yesterday for 13 hours.  It was a very long day.  We are home and tired.  I have to keep one eye on Far Guy for 24 hours. 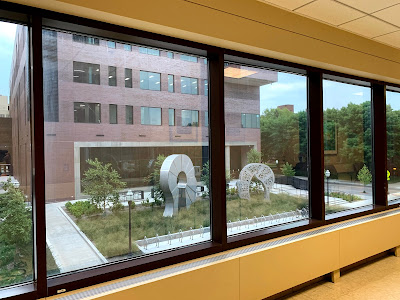 This was my waiting around view...it was better than in the waiting room...a storm moved in it got dark like at night enough for the lights to come on outside...it blew a bit and rained and then it was daylight again.  The sculptures are aluminum...and called "Dialogue."  Believe it or not there was a Bunny running around in the gardens surrounding the sculptures.

Far Guy had his procedure...each team of Doctors have different requirements for surgery.  Of course Far Guy met all his Surgeons requirements...but not the Surgeon that was doing the surgery...go figure.  They wanted us to go home, stop a medication for five days and come back...surgery was too risky and he may drown in his own blood.  Far Guy told them to call his Surgeon...they had a conference and decided to go ahead. ( If his surgeon had been doing surgery it would have gone ahead as scheduled) All four valves were removed.  The consensus was " Your lungs are not compatible with the valves so they did not work as they were supposed to...it happens to a few patients."  Luckily there was no bleeding to speak of and Far Guy did just fine.  Far Guy says he feels less short of breath already...and we hope that continues.

We got home just before dark.  In the morning we saw five deer, three turkeys and a cow in a ditch.  In the evening we saw just one deer.

It was smoky all the way home...from the fires in Northern Minnesota.  Far Guy took a photo for me. 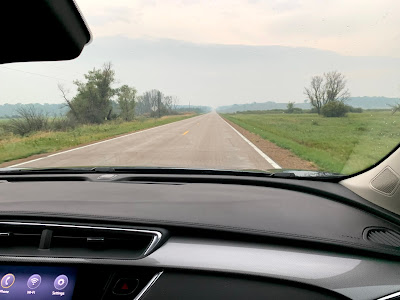 Today will be a quiet day.  Maybe a lazy nap day.