We finally have some much needed rain.  It has been raining for two days now.   The grass is getting green before our eyes!  We planted some new grass in a few spots just in time.

Grocery day was okay...just missing Pretzel Rolls this week.   We are still ordering online and picking up in the parking lot...we are still disinfecting too...what can it hurt?

Earlier in the week we both saw the Eye Doctor...my one appointment suddenly became two more vision tests later in the month. (He is concerned about "some pigment" that shows up in one eye) and they cannot do both appointments the same day because of insurance.   Far Guy refused to have his eyes dilated after having the optomap...I had both dilation and optomap and wore my sunglasses until the next day. Cross something off our list but put two more appts on.

I finally had time to block my latest project.   I took a photo one day before the rain. 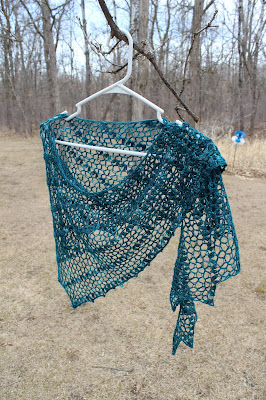 This one is mine.  It is the first thing I have had that is cashmere....and the yarn was a gift from Far Guy!   I love the way it turned out.

I am watching a season of Survivor on Netflix...and yesterday I watched K-9 which was okay I give it a 6 out of 10...cause I like a smart dog and my nap during the movie was only about 10 minutes.

I did have my eyes dilated last time and man it took forever for the eyes to return to normal. I am pleased to no end with the young doctor who took care of me. He is an avid Hiker! We watched a movie called Concrete Cowboys on Netflix last night. Wow. It is based on a true story. You could check it out.
Rain.
Yes, we have rain here! May go hiking in the rain today.

Your latest shawl is so delicate looking, I love it. We also have had rain for the last 2 days and boy is everything growing and blossoming out. Have a great weekend.

It's very pretty, almost as nice as mine! (smiling here) And glad to hear you are getting rain. We get so much I forget that some people need it. :-)

It is fun to see everything greening up. Just when you thought you would check something off the list, one appointment turns into more. For good reason tho. I had to look up what an optomap is. I haven't been to an eye doc for a few years now...looking forward to going, so I can get a new pair of eyes (glasses). Guess I better get something on the calendar. Beautiful shawl, love the color!!

Cashmere feels so wonderful and soft. The shawl is a beautiful color and will look great on your shoulders. He has good taste in yarn.

Glad you are getting some rain and hope all goes well with the next eye appointments. I love your newest project, very pretty! I recently saw this recipe for easy pretzel rolls and thought of you - https://sallysbakingaddiction.com/easy-pretzel-rolls/

We got some much needed rain this week too and the lawn has turned so green. Some of the trees have budded out and have that green "shadow" look with baby leaves. My husband just walked in and said there was about 2.5" in the rain gauge. We needed it.

Haha rating a movie by how much you nap during it is priceless!
Your shawl is a lovely colour and must feel so luxurious.

The shawl is beautiful!
We've had rain on and off all week. It's been nice to help green everything up.

We need rain here too. It's terribly dry and cold and windy!

We're incredibly dry here too. There was a grass fire just outside the city yesterday but thankfully the fire department was able to contain it fairly quickly. There were a lot of trucks that went out by the sound of the sirens I heard. We'll get a little snow this upcoming week but I'd far rather have rain.

Your shawl is lovely! Enjoy wearing it.

I love your new shawl, Connie, and am glad you're keeping it for yourself. Yes, "it can't hurt", indeed, to take care still. We are doing the same. ~Andrea xoxo

Lovely shawl! The rain is greening up the grass. Feels more like spring all the time.

That shawl is beautiful and I love the color. I'm happy to hear this one is for you! We put out some grass seed too, the day before it rained. I enjoy Survivor and I hear it is coming back this Fall. There is an interesting kind of psychology between people on that show. We are still disinfecting our groceries too and wondering how much longer we should keep it up. One of my concerns is all the new variants of the virus. You two enjoy your day!

I had my second eye appointment today after having the first one two weeks ago. They saw some pigment in my eye fluid too, so they wanted to check it. I too refused dilation seeing as the optimap shows them so much. Really clouded up so we are hoping for the rain to come. The forecast is showing days of rain which we sorely need. Lots of brush fires around and a total burn ban for garbage and bonfires.

I happened to find a package of pretzel bun rolls (shaped like a hotdog bun) marked down at the store and had half of a fried pretzel bun roll for lunch today with my split pea soup. It was wonderful. What a shame you weren't able to get some.

I watched survivor when it was on the first season I really enjoyed after that it was too much back stabbing and I guess a mind game..not what I expected.
That yarn color is spectacular!

your "project" is lovely!!

The shawl is beautiful and such a pretty color.

I've always found it amazing how apparently-dead brown grass literally greens up before your eyes when it starts raining. One of the marvels of nature :)

Your shawl is just beautiful! Our rain finally stopped. I was beginning to worry. Now, we could use a shower to wash away some of the pollen. Oh Connie, thank you for the beautiful card. I appreciate it so much. I'm sure you totally understand the hurt after losing Chance. He was really a special dog. Thank you.

Such a pretty shawl.
It seems like medical appointments fill up a lot of space on our calendars these days. Are we getting old?

Glad your grocery shopping went pretty well this week. Your shawl is beautiful ... I'm glad you're keeping it for yourself.

Isn't it something how the grass perks up so much with rain water? The rain does a better job than any sprinkler system could!

I pray all goes well with your eye appts. We are due to have rain today and hopefully it will wash away some pollen. I love your shawl. The color is gorgeous.

I was told to go to the optic doctor soon. The diabetes messes with things and I am sure new glasses could help. I blurry many days of the week so maybe they can figure out something. Your shawl did turn out great.

After the rain the sun will come out and you will have to mow! Your shawl is beautiful and I cannot even imagine how soft it must be. I'm still watching Heartland every night.