Far Guy's robot vacuum Dracula found the puzzle piece...my theory is that one piece was dropped and Dracula threw it under the couch and it took several days to unearth it from under there...Far Guy found it yesterday morning near my computer chair...it will join the other pieces again.   I took the puzzle apart a few days ago. ( we call the vacuum Dracula because it goes nuts in sunlight and sometimes it vacuums at night all by itself) 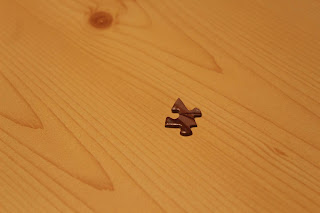 I found time to work on the income taxes...they are all set to go to the accountant after all the proper forms come in the mail....I hate that job so I am happy to have it done.  No I am not nuts enough to do the taxes myself....one audit will scare you half to death..and I am happy to have an accountant.

Roger (the Sexton at the local cemetery) called so I  have found general areas to search for the graves I am looking for ...I just need the snow to melt.  My theory is that some of the older graves have markers that sunk and have been covered with grass.  I wonder what is the best way to search for them?

I found out that the Minneapolis Star Tribune offered four days free to search their Newspaper Archives...that was fun.

I also found some bits of family history that no one ever wants to talk about....how much is true and how much is exaggerated journalism remains to been seen.  Kinda like journalism today.

Happy to hear you found your missing puzzle piece. Hubby and I also have an accountant do our taxes. Dealing with the IRS is not on my list of fun things to do. That is what I pay my accountant to do.

Uggg, taxes. I have to wait for the VA to send papers to us each year. So I won't do anything yet for another few weeks. I also let an accountant do ours.
I'm smiling at the found puzzle piece. So Dracula had it all of the time! ")

I'll bet you had fun searching those archives! And that was quite a find. You still remember your parents' old phone number? I am impressed. :-)

Rose jumped up in the chair & took some puzzle pieces as her chew toys. I found all the pieces & completed the puzzle though several pieces had chew marks. Bad dog! Karen

Dracula....that was funny! So glad you found the puzzle piece. If it was my house it might be lost forever! Taxes? You are early...mine doesn't take long and i use Turbo Tax. I used to have an acounttant when I was working and had a family but now there isn't enough money to make it worthwhile! LOL!

A piece of rebar or long metal rod to poke the ground . I am not sure that is what you meant , most cemeteries have a plat map at the city offices or whomever takes care of the cemetery that shows exact place the stones should be. Not sure winter would be the most fun time to do it. Once you find it , a shovel may be needed. Dirt may have encroached as well as grass.

Glad you found the puzzle piece and I don't even want to think about taxes yet, ugh!

Yesterday I lost something under the sofa, used the long handled duster to retrieve it, and a missing creche figure came with it. I thought we were short a shepherd when I put away the Christmas stuff.
I'll think about taxes after the forms from the various agencies get here showing me last year's capers. Not fun.

The family history (mystery) is always interesting to uncover. Maybe not always pleasant, but interesting. We lost a puzzle piece between some cushions this fall but found it after crawling around the floor for way too long.

My husband and I are working on a cemetery project too, and it may have to wait for spring to walk the cemetery again to locate graves to put onto the map and directory we've been contracted to create.

I've thought of getting a robot vacuum but never do it. As soon as we get that MASSIVE woodpile finished I hope to have time to do research again. Good for you in all you are getting done.

That's great you found your puzzle piece! I did a big puzzle once and one piece was missing. Never did find it. I think the puzzle came that way.

Yay for finding the puzzle piece! Your vacuum does sound a bit like Dracula if he prefers to work at night. Or maybe he is just a night owl. Good for you for getting your taxes taken care of early. I hate that job but it is much easier since we retired and don't have any money, ha!

Dracula.... *hahahahaha*! He found the puzzle piece... another reason to love vampires. :-D If this one ever dies you can name the next one "Bela". ~Andrea xoxo

I'm glad Dracula "coughed" the puzzle piece up. When I get another house someday, I'm getting a robotic vaccum too and I'm going to call it Dracula. I think that's hilarious!!!
We also use an accountant. It's not worth the stress of doing it ourselves. It's very intimidating when we think of moving. I was just listing all of the doctors, lawyer, accountant,etc. that we'll have to find again. I didn't realize when we moved to Nebr. to Wash. that our will wasn't any good any longer. We had to have that redone. Now, when we move back it will have to be done again. Crazy AND expensive. Nothing changes, just the state.
Take care.
Blessings,
Betsy

I laughed at your description of Dracula. That's hilarious! Glad you found the puzzle piece.

I'm working away on the family history of my parents and grandparents. It's very interesting and I've got an answer to a question I've had for many years. But I do get frustrated because I keep running into sites I'd have to pay for to get access to. My thought once I've got the Canadian stuff sorted out, I'll consider paying to access other information to take my search further.

The work that you and the other volunteers do in researching the grave sites is definitely a help. I'm starting to compile a list of places to visit with the cemeteries in mind.

I remember my grandparent’s phone number, too — Emerson 2440. Don’t remember my own (my parent’s) from the same time though. Is the Star Tribune offer still on? I will have to look into that,depending on how far back the archives to.

Having been audited many years ago I agree totally that it is a scary situation.
A very unpleasant guy did the sudit and could find nothing wrong but when he finished he had the nerve to say "I know there was something shady here, I just couldn't find it that's all"

Last year I was so happy I had an accountant. I had to pay and did. Then I got a letter saying my taxes were past due and penalties were added. My accountant took care of it and I didn’t have to do anything bu5 get a copy of my check.

Today is the last day!!

doesn't it feel goodk to find stuff over lossing stuff

I always used to heave a sigh of relief too when the business books were ready to be handed over to the accountant. I wouldn't want to go back to those days.
I love finding things out about family history that the family of the time kept hidden away. Skeletons in the closet!!

So glad Dracula had the puzzle piece!
I remember our number from when I was five and we moved to the new house in Fridley.
SUnset-8-2295 I had to have it memorized to go to first grade.
Come spring you will be on the graveyard hunt again. ;)

Well, you found your puzzle piece.....I like the reasons you named your vacuum. Pretty funny. How cool to find an old ad of the family in an oldtime newspaper. Yes, winter is a hard time to be searching in cemeteries. I agree about the main stream media today....their fake news makes me ill. This year should be a doozy. I'm praying for peace.

Yeah on that puzzle piece! Taxes - good for you! (I haven't started yet).

Maebeme, if you are frustrated about the family history subscription sites, one way around all that--at least, during COVID--is to check with your local library to see whether they have a "library edition" of Ancestry.com, which can be accessed for free with your library card. Many libraries have extended their patrons' access to Ancestry's library edition so that you can be able to sign on from home, due to the pandemic. It's certainly worth a try, if you have a local library card.

Kudos to Dracula! Amazing how frustrating it can be to lose one tiny piece.

About that journalism...yeah, likely exaggerated. Or just plain ol' wrong.

We have until June 15th to get our taxes done. So we wait until about June 10th to start, and get it into the accountant about the 12th or 13th, lol. Procrastinators are Us!!

Glad the puzzle piece was found. Interesting family history finds there too.