My baby brother brought his bride, daughter, son in law and grands over after the storm last week...the kids all used the electric shovel.  My brother helped to shovel...they moved lots of snow so that made it easier for me.

Here they are hiking back to their house. Photo taken Wednesday December 30. 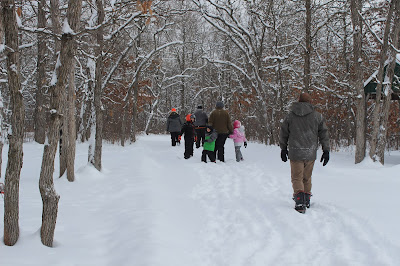 Later that day my other baby brother came and moved a lot of snow with his big old snowblower.

Here he is moving snow behind the bird feeders. 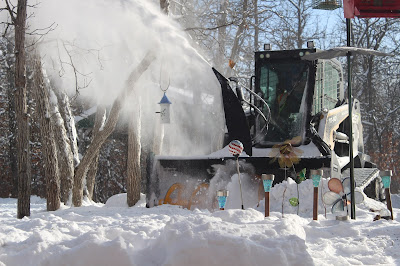 On New Year's Eve day we puppy sat for Baxter. 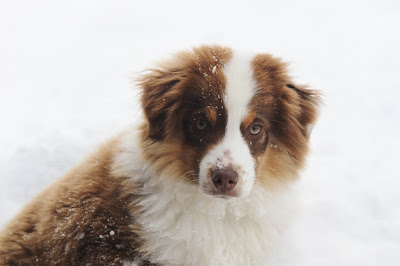 He did not like being left with us.  He was a turd.   Good thing I put a leash on him or he would have ran back home.  He ignored us both for most of the time he was here, I walked him outside and we played on the snowbank named June...he likes being up high and sliding down the snowbank...he also chased some leaves....but he was just miserable.  He would not take treats from my hand until I had him on the leash. Most of the time he was here he hid under the dining room table and closed his eyes every time I got down on the floor to make eye contact with him....it took him almost four hours to get his toy off his blanket and drag it under the table. 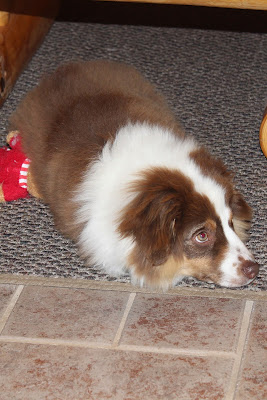 He is a 17 week old puppy...he let me touch his ears and nose and he has a soft mouth and finally ate some dog food out of my hand.   He growled at me several times....I growled back!  He is right at the age where he is bonding with his pack and he has decided I do not belong. My brother and his bride hiked over again yesterday...I had my brother put him on the leash...I took him to the snowbank to play and to do some leash work and then I released the leash and praised him....he promptly ran to my brother.

We will work with him a little at a time.  I think he is a little stuck on himself...but will eventually like me.  I am not sure if he is stubborn (like G'Day Mate was) or just needs more socialization.  My brothers Grands went home...so he is a puppy adjusting away from some of his pack. He has only been with my brother for 12 days.

Baxter is a work in progress. 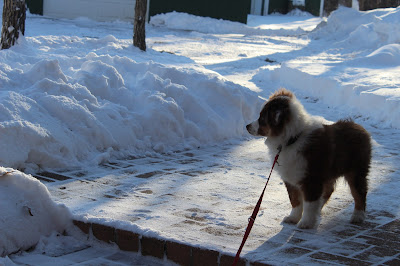 That's so cool your brother and family can just hike on over to your place whenever. Nice to have family nearby. Baxter sure is a cutie.

Interesting about Baxter. I don't know about his breed, but I'd think he'd be more human oriented...? It will be fun and interesting to hear about him.

Well the little turd sure is precious lol!

Baxter is so cute tho. Sorry he was homesick and didn't enjoy his visit with you.

Poor Baxter. My parents took in an adult dog (shepherd/lab cross) and while he adjusted to his new life with them really well, he had zero interest in me when I came to visit. He wasn't mean or anything, but if I tried to pet him, he'd walk away. That is, until I spent a whole day dog sitting him and their other dog Jem (Jem absolutely adores me and always has). Now when I show up, the first thing he does is grab his ball so we can play. Then we have to have snuggle time.

Baxter is so cute. Probably just a little puppy separation anxiety. Nopuppy can hold out from a treat-bearing dog lover like you for long! That’s quite a snowblower. I might still live in Minne-snow-ta if I’d had one of those.

Poor dogggie! Too much upheaval. You are right, he was sad.

Yes, he is feeling abandoned. The long he is around and he will bond. He was almost pouting because of it all. If they leave it off more often things will change.My new hired guns do a great job on my driveway and sidewalk. I am required to pay them very well.

How cool to have brothers so close to be able to help you with the snow. Poor Baxter. He is SO cute but I'm sure he wonders what's happening with his life right now. He thought the kids were there permanently and can't figure out why they've gone. Eventually he'll love you and want to play. But you know that, you're a dog whisperer. :-)
Blessings,
Betsy

Baxter is a cute fluff ball!! It is harder socializing a puppy in the winter, and even more so a pandemic. He looks like an Australian Shepard? Aussie's are an interesting breed. We adopted two half Aussie-n-Lab brothers with completely different personalities. Great dogs, I am sure Baxter will come around once the newness wears off. Nice to have family nearby to visit and help out.

I love the picture of the family hiking back home. I bet Baxter is missing those kids since they left. Puppies and children often do so well together. It sounds like he is very well bonded to your brother and his bride and was having a little separation anxiety when he stayed with you. Maybe if you puppy-sit a bit more he will warm up to you. They are just like human toddlers, aren't they? Baxter sure is cute and I know he will come to love you and Far Guy.

I'd say it's definitely that he needs more socialization. All the social distancing has messed up my Logan's social skills. Our Westie, Lilie, is great about interacting with other people, but our Cavapoo, Logan, who went through his training with us in and out of lockdown - and was a bit shy to start with - is really clingy to me, and reluctant to interact with others. Even has issues with other dogs besides our Lilie sometimes. He's been seeing a lot of my parents - as well as my Mam's CavaTsu, Izabel - since we moved back to Wales last month, and is already showing signs of improvement. He's started greeting them when they arrive, and didn't even growl once when Mam was here with Izabel the other day. So, keep working on him, and I'm sure Baxter will get the idea.

Baxter should be socialized more or the family's not going to be able to have anyone over to their house, once this virus is over. I know it's hard with COVID. My hubby used to stand near the door of our local grocery store and let everybody and their uncle come up & pet Mozart. I think this could still be done today with masks and a 6ft. leash. As soon as Baxter can be neutered, that will help too. ~Andrea xoxo

He's a good pup! But yes, at an age where he's deciding who fits with his group and who doesn't. And occasional people are something he hasn't figured out yet. But you'll see the benefits as he gets a bit older and more experienced. And he'll know where to come for treats and playtimes.

He surely is cute, though!

I am so impressed with that snow blower!
Baxter will take some patience and adjusting--LOL! But isn't he the cutest! :)

Brothers can be great blessings!!

Oh, Baxter is so cute! Poor puppy....they take them away from their mom and then his adoptive parents leave....so sad. It would hurt your feelings though if he acts that way. Usually puppies are jumping all over you...he might need therapy! LOL! Don't we all! There are days when I am so tempted to get another dog but then I talk myself back from the ledge. It would be selfish on my part. So nice you get so many visitors!

Poor Baxter. Seems he doesn't like being dog-sat. My oldest son hated being babysat and acted much like Baxter ( except for the growling part). He'd sit right by the door we had left by until we came home, no eye contact with the sitter at all.

Puppies are generally cute so no surprise Baxter is

Baxter is adorable! I hope he gets over himself and becomes more social, because I'd love to see more of that cutie. Thanks for the fun pictures, though, of a thoroughly miserable little guy. :-)

But, he is so darned cute.

You growled back. How funny! Baxter will come around. He is adorable. Karen

Poor old Baxter. I hope he gets used to you soon.

Baxter is sure a cutie. Sorry he is having such a hard time learning to socialize with people he doesn't know that well. Hopefully that will change. You're pretty nice people! Here's guessing he'll get much better with time. So nice to have family living so close!

Despite his attitude, he's sure a cutie. It's good that he is bonding with your brother and his family, but I'm sure he'll come to realize you're pretty nice too. Especially since you play with him and give him treats. :)

I love that photo of your brother's pack hiking back home. What fun visitors you have. Well, maybe not Baxter, ...yet.

There is lots of info out these days to support not neutering or spaying until a dog has finished growing. He needs his hormones intact to do that:-)

Happy New Year! Baxter is a cutie! It sounds like he is meeting a number of different people what with the grands etc. Aussies can be quite devoted to their family and not that interested in others. A few visits to you should get him to accept you at least, but he may not be fussing all over you.