I had two woodcarving projects...one has been in my carving tote for a year...the other was out in the woodshop just hanging around.  I have more unfinished carving projects...these were just the two I chose for this week. 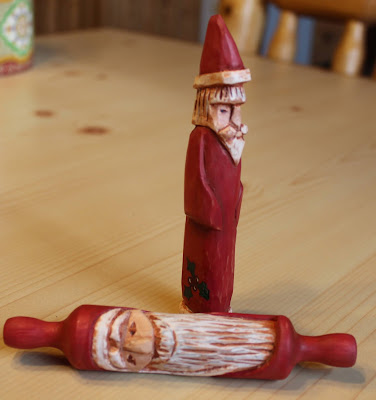 The rolling pin was a turned project from my Cousin Chuckie.  Nice to have that one done...I put a hanger on it and hung it by the fireplace...yes Christmas decorations are still up.  The Santa was a project started years ago and is now finished.

I have not carved in a while...I miss going to the Woodcarving Group on Monday afternoons...soon it will be a year since we have gathered.  The group always shared ideas and tips and tricks.

We are making progress on going through the woodcarving stash of magazines.  My goal has been four issues a day, by the end of the week I should be done.

I love the Santa rolling pin. What a clever idea!

Sorting through accumulated stacks of papers and magazines is on my list. I think I will get back to drawing and painting soon. Life is beginning to smooth out a bit.

Those are incredible! Wow. I did find my knife from a basic woodcarving class my first MIL took me to in 1982. I think I may find some time to whittle on the porch and get away from electronic devices.
Keep the hands busy and the mind clear!

You both do a wonderful job with it!

Nice! I've not put away Christmas stuff yet either.
Have a blessed day!

These both are beautiful woodcarvings.

I've never tried wood carving but find it fascinating. You've made me think of an old gentleman who hung out at the lumberyard next door to our house when I was a child. He sat and carved and chatted with folks every day. I liked going over to watch him carve and he took the time to chat with me even though I was a little kid. Hopefully I still have the tiny pair of wooden boots he carved for me. I think they are in my jewelry box.

I absolutely love those carved Santas! You are so very talented! I enjoy reading your comments and seeing your photos every day! Sandy from Ada.

Another one of your myriad talents. Love the rolling pin! :-)

Both are charming! You have been getting so much done this winter!

You are so talented!!

Those are wonderful projects now happily completed! I love them both and would never have thought of turning a rolling pin into a Santa ornament. Your creativity is always amazing. I've always loved the Santas you make!

Oh my! They are both beautiful. Your talents aways awes me Connie. How come I didn't get any of it? :-). The detail!
Wishing you and Far Guy a wonderful day.
Blessings,
Betsy

Those are precious! I love the rolling pin. I am getting ready to go sit down and go though a bunch of paperwork....ugh.

With all these projects around you'll never be bored.

Years ago my uncle gave me a very heavy oversized rolling pin that he had made on his lathe. I kept it for many years but never thought of getting someone to paint on it. I ended up donating it to the thrift store.

We've been watching an interesting old series on PBS (we stream from the website) on Craft in America, and every time I look at your blog and pictures of the amazing things you and Far Guy are able to create, I think they need to start a new series and film you. You are so gifted.

That is great that Far Guy carves every day. Your Santa ones look great. I have tried to get back into art work and have found my right hand is disabled slightly causing me not able to draw very well. I guess I noticed in typing but didn't think it would bother my art work.

I really admire your wood carving skills. I know what you mean about missing the group. I joined a stained glass class at our local senior enrichment center. I had called to register for a different class and was twice given the wrong information. The first time I showed up, there was no class. They told me to come back in a week (instead of an hour) and there was an intermediate stained glass group. A patient teacher and helpful classmates encouraged me to stay and eventually I talked a neighbor into joining me. We would attend glass and create beautiful things for three hours and then go out for coffee for two more hours. I really enjoyed it.

Not only has our class not met since last March, our teacher has health issues and will not be returning. I have lots of expensive tools and supplies, as well as several sheets of specialty glass. I don't feel safe working with any of it at home with toddlers everywhere. I can't wait until the world returns to "normal" but I think it will be a new normal, not the life we had one year ago.

If always feels so good to finish a project (or two!). I love your Santa carvings, you are very talented.

You sure are talented....both of you, in so many ways. Today just shows your talent in wood carving. Those santas are super! I'm sure it's sad that you can't get together with your wood-carving friends. Hopefully some time this year, that will change! Be hopeful!

Cool...I have to say that would be one thing I have never taken up. Great job.

Nice you could get some wood carving done, and even better that you managed to cross a couple moreprojects off your list while doing so.

I love your standing Santa. Looks like a lot of work.

Can you believe it is almost a year since all this started?! Yes, I imagine getting together with the wood carving group allowed everyone to share tips along with swapping news and stories. Has your group ever considered meeting via Zoom while you each carve at your own homes? At least then you could talk with each other while you work and show each other your progress...