Jo called yesterday morning to tell us that Odda was very sick and if we wanted to say goodbye we should come over.  Of course we had to say goodbye to one our favorite dogs.

Odda was supposed to be called Bella but no one could stop calling her Odda. (Odda 1 died when she was 16 weeks old of a heart problem.) 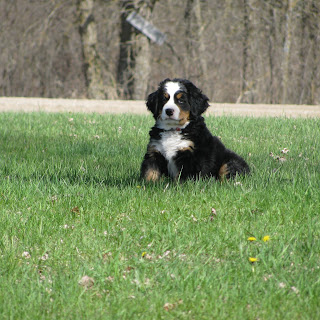 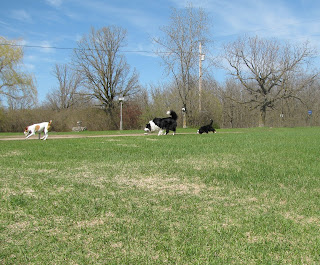 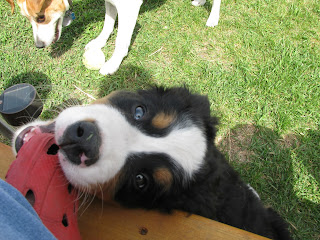 She liked chewing on my crocs and me!  Eventually we came to an understanding.   She liked me and listened to me without hesitation.

Then good boy Hooch died.. a tick disease took him within hours in May of 2011. 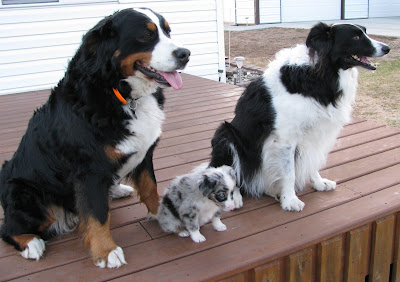 Something happened around 2012 ( probably Putz)...Odda began to visit us on a regular basis...we thought it was just to see Chance but it continued after he died.  She would cross the road at her house go into the woods and come down the trails to our house. 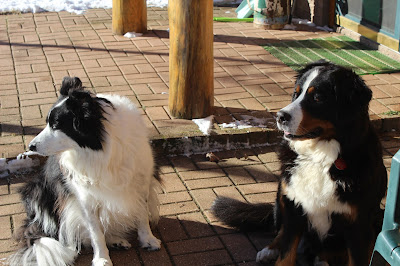 Odda and Chance were good friends. 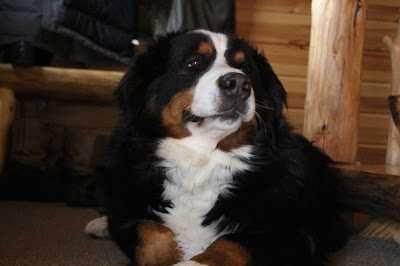 Odda was a good friend to us after Chance died.  She came to visit more often...we would sit outside with her until Jo came to get her...sometimes we would take her home.  Sometimes when we were gone to town she would be waiting for us when we got home.  We were her safe place. 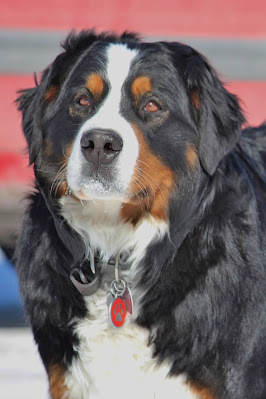 Bernese Mountain dogs are loyal, gentle dogs.  She loved to sit on my foot and get a good scratch.

There was no sitting yesterday...but she did lift her head up for a while...we got to pet her and say our goodbyes.  Goodbye Odda come to visit.

We will miss our visits.  Our neighbor Jo will miss her girl Odda so very much.  It isn't easy to lose our four legged friends. 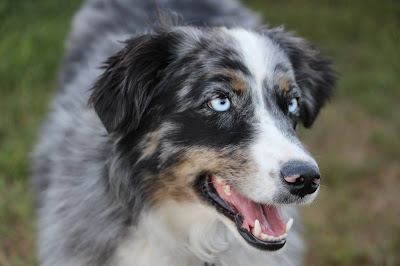 Odda is survived by her little brother Putz or Putzer...who is almost blind...but his hearing and sense of smell is pretty good as he took the crumbs of a treat out of my hand.  He will miss Odda too...as she was the Alpha dog...poor Putz.

Oh I am so sorry to hear this as Odda seemed to have been so loyal and wonderful to all. Hopefully Putz will adjust. :(

I am so sorry to hear that Odda died. I know how much you always enjoyed her visits.

So sorry for the loss of your four legged friend. So sweet how she would visit, and wait for you. I am glad you got the chance to say goodbye, she no doubt knew. Dogs (animals in general) have a way of tugging at your heart strings. My grand dog is a Bernie. Remi has spent a couple days a week+ in my care since she was a pup, four years and counting. She picked me as her person. Bernies are so loyal.

I am so sorry to hear that your beautiful dog friend has died. She looked like a lovely girl. They certainly find a place in our hearts, don't they. It was kind of her to invite you to say goodbye.

I am sorry to hear you lost your furry friend. I know you will miss her and not forget her. I still remember our family's furry members. Some of them like Chance and Odda have an extra close connection with us.

I'm so sorry Connie. My heart hurts for you and all of those who love sweet Odda.

Awwww.... I know you will miss your friend Odda, I think she helped to fill the hole in your heart after Chance died. They are always too soon gone, aren't they? She was a lovely dog. Thank you for sharing her with us.

The loss of pets - even ones I've never met - always makes me sad. They have such big hearts full of love.

I'm so very sorry for you and Joanne. It's never easy when our fur babies leave us but these days I think it is even harder.

Berners are wonderful dogs. I used to know a couple of them so big and gentle and good humored. It's sad to say goodbye.

I'm so sorry. It's always so hard to say goodbye.

Golly, I can't hardly take all the sadness anymore. Good-bye Odda I loved knowing you.

Oh yes good ol' Odda will be missed. We visited Odda on Sunday (she wasn't interested in wrestling), we knew it was getting close. I thought of you guys and I am happy you got to see her. I visited her again yesterday just after you left.

More sadness. I'm so sorry. She sounds like she was a lovely friend.

So sorry to hear that you lost such a good friend. It is so hard to lose our furry friends, they leave such a big empty space when they leave us. ((hugs)0

I am so sad to hear this. I will miss Odda too as I remember her fun times with Chance and her many visits to you. My sympathies go to her family, Putz and you and Far Guy as well. I can picture her and Chance reunited and running happily together again.

Saddened to hear of Odda’s death. I loved that she visited you on her own and that you were able to say goodbye to a dear friend.

I'm so sorry. You will miss her so much, she was a connection to Chance. I hope they will find each other once she's over the bridge.

Sorry to hear about Odda. I actually had two Bernese Mountain Dogs. I got my first, Tasha, when I was a teenager. Bernese Mountain Dogs were very rare in the USA at that time. I got my next one, Bram, after Tasha unexpectedly passed away. Bram passed away when she was only six from an unknown cause. They are beautiful dogs, but I do find that Border Collies are more suited for farm life.

Oh no--so very sorry! Odda was quite a special dog. I loved that she came to visit even after Chance was gone. Such a beautiful dog--like Chance was. She will be missed.

So sad Odda will be missed

such a beautiful dog, and such a sad loss. She was dearly loved.

Oh how heartbreaking these times are, she was a beautiful beast.

So sad to part with one who loves us more.

Oh dear....another beautiful dog leaves us. Odda looked like a real winner and was such a friend to your Chance too. It's so hard to say goodbye to these beautiful, loyal pets. How nice that you had a chance to say your goodbyes. I'm sorry for your loss.

Odda will be missed by those who loved her. How hard to say Good-bye.

I used to love hearing about Odda showing up at your place. I'm so sorry she is gone. The only bad thing about dogs is that they don't live long enough.

I'm so sorry to hear about Odda. I used to love reading your stories about her. She was definitely a special dog. I'm also very glad you got to tell her goodbye. I'm sure she knew you were there. Big hugs to bog of you. These four-legged family members and friends sure take over a big place in our hearts.
Bessings,
Betsy

It doesn't take much to bring out the tears and Odda's death did it. It brings up the love we have for our canine companions and even those we've never met. I loved when Odda would visit you as I felt connected again. I would have given anything to pet her. I'm sure she'll meet up with chance and maybe Nitty and Annie too. Pelae give my condolences to her owners.

I'm so sorry to hear about Odda. She was a beautiful dog, and so sweet. I love how she visited you all.