Gloomy but warm it was about 30 F yesterday.   The sun made a very brief appearance and then went away AGAIN.

After the Grand dogs left I watched two very unremarkable movies...The Awakening of Motti Wolkenbruch a Jewish Comedy  I give it 2 stars out of 10...for comedy only.  Then I watched Inside Man Most Wanted a hostage shoot em up thriller...not so thrilling..I give it 3 stars out of 10 maybe.  Neither is worth a second watch EVER.

I usually crochet when I am watching a movie.   I worked on some Wildlife Rescue Nests and some seven inch squares that will be donated to a gal making afghans for charity. 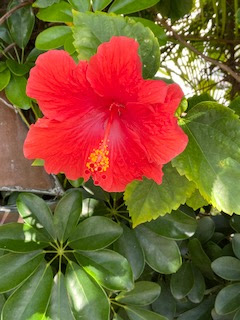 A flower photo from blog reader Roz.  What a beautiful Hibiscus!
Far Side
Posted by Far Side of Fifty at 3:00 AM