Far Guy took an Ancestry DNA test a year ago.   Good thing too as it was the beginning of a much larger story.

On Sunday January 5  Far Guy received an email from someone on Ancestry " Hello. I am now in a more comfortable position to start messaging those connected to me on this site.  You and I are related.  I know for sure you are not one of the siblings, so you must be a cousin to my father.  I would love to know more about his side.  Would you mind helping me?  Thanks"

Far Guy said "I think I got a spam email on Ancestry?"  I replied "Spam is very unlikely on Ancestry."  I talked him into answering the email... "Fathers name, where does he live now...what year were you born?"

In the meantime Far Guy emailed his cousin who said "Is this a joke?"  Nope... a few minutes later the phone rang and more conversation continued between the cousins.  A bit of research was done, a few questions asked.  I point blanked asked "Did  you have unprotected sex sometime in the early 1980's in one particular part of the United States?"  The answer was yes... possibly.  I found a photo of his daughter on the Internet ...no doubt in my mind that he was a daddy.

He could not believe it...he had many questions...should he have a DNA test to prove paternity?  Should he email her or just call her???  He was just stunned and repeated over and over I just cannot believe this is happening....then he would say of course if I have a daughter I want to meet her and be involved in her life.

We were sworn to secrecy!  He asked me not to write about it on the blog until his daughter had time to contact all her relatives to tell them the news.  She has recently acknowledged her Dad on Facebook...so now I can share this story with you!  They have met and spent several days together, he is not only a father but a grandfather.  He has no other children so this new found daughter is an absolute blessing to him. We are just thrilled for him and for his daughter and we hope to meet her when she comes to Minnesota.

She is a teacher.

She was persistent.  Last summer she contacted a sibling, that said they would "get back to her"  but never did. Can you imagine a sibling not saying anything to another sibling?

She then figured that her father may not want to be in contact with her....I guess you always consider the worst case scenario.

Anyway she wanted to try one last time and Far Guy was the connection she pursued...one last try to see if she could find out something about her Dad.

I love that TV Show Long Lost Family and watch it all the time.  Never thinking that we would be involved in our own drama!

For the record.  Far Guy's cousin did not know about a pregnancy or a child.  Finding out you are a Dad and a Grandpa at age 70 is quite a shock...they both feel many years have been wasted so they hope to make up for it now. 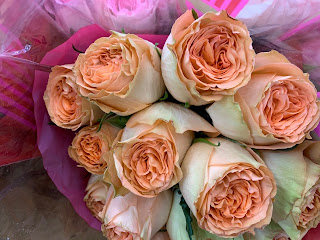