We got up early on Wednesday..checked the weather and headed on over to Duluth.  We were gone just 12 hours. It is a four hour drive one way.

The last time we were there for train shopping and a bit of antique shopping Far Guy took ill.  Since then he has wanted to return. Yesterday was the day.

Next to Curly’s Bar is the Train Shop.  It is a way cool place..I walked Chance down the street..it is in an old part of Duluth..I am not sure how safe that part of town is. But it was daylight and I had a dog!  He wouldn’t hurt a fly..but no one would know that!

The roads were good and the temperatures were in the 30’s.  EXCEPT near Lake Superior.  Those Duluthians are a tough bunch.  The wind coming off of the ice was bitterly cold. 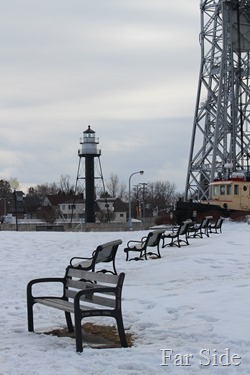 There was plenty of room to sit a spell at Canal Park.  Not many tourists were around.  As I was walking back to the car I met a Grandma and her Grandson all bundled up with scarves covering their faces and necks..only their eyes were showing.. I said “Hello….chilly day in Duluth! “  She replied.. “This is a warm day!” 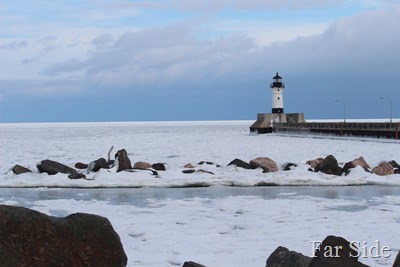 The lighthouse in Canal Park is one of my favorite places to visit. I was there last fall when it was a tad warmer.

The antique mall was great..we enjoyed several hours just walking around.  I found a few  many  lots of old photos to add to my collection..and Far Guy found some “stuff” for his train set.

It was a fun day..and a lovely break from our winter routine:)

I think I've seen that lighthouse before. Glad you had a break from your routine, even if it was a bit on the cold side. :-)

Glad you and Far Guy got a break from your routine. we all need that once in a while. I sure know I need one. That is a great picture of the lighthouse.

Praise God for a good day out and about! It makes being inside for a few more weeks more tolerable. You and your husband enjoy and support each other's hobbies/interests and like being together. Not everyone can claim that.

Even if it is winter, those pictures are pretty! Bet it was a great day trip! No sick Far Guy I hope?!

Both shots are lovely but that last one is simply magical!

I wondered if the antique mall was still in business. That is so great. I have not seen Duluth in winter but maybe this summer we will take a jaunt up to visit for a couple of days. Cold winds coming of the ice would be painful. Great visit for all three of you.

Duluth is a beautiful place to visit: the layout the streets, the houses, and the streets is very distinctive. I want to return to go through the Glensheen Mansion at a slower pace than I did the first time. Someday, I'll do that.

The most perfect way to spend a day!
~Laura

We do need breaks to get us out of the routines that make us prisoners.

So this is near the great lakes? My geography is rusty....

Love your photo of the lighthouse. That steel gray color really brings the chill out--even just looking at the picture!

Yes, Duluth Minnesota is a harbor on Lake Superior.:)

An break from everyday is always nice...and you are having even longer daylight than us...yippee!

We save our trips to Duluth for mid-summer (we're about an hour away). You're a brave soul :) However, I have to admit it looks as though I have been missing some great photo ops!

That's a lot of driving for a day trip, but it sounds like a fun day! I pulled up Google Maps and checked out where Duluth was, it's on the wolf's nose:) (Back in the day, Lake Superior was described as being shaped like a wolf's head, Lake Michigan was a sweet potato, and Lake Huron was a trapper with a back on his back)

That lighthouse photo is so beautiful! I love antiques shopping.

Can I simply say what a comfort to find a person that really knows
what they are talking about online. You certainly understand how to bring a problem to
light and make it important. More and more people need
to check this out and understand this side of your story.
I can't believe you aren't more popular given that you certainly possess the
gift.

Oh, a train shop!!!! I LOVE trains...I was never allowed to have one when I was little cuz I was "a girl"! I tried to get my boys interested when they were little but they were outside boys regardless of the weather. I got them a set and they wrecked it so there went my, I mean their, train. I love to ride them, read about them, and I have some videos of train excursions. I always wanted to do one of those outside train setups with the landscaping. Plus, I would love to take a trip on that American Orient Express.
Duluth....I love that town and the whole North Shore. I used to there in the Fall when the leaves were changing and I loved the drive. It was about 5 hours I think and I'd stay overnight and go back the next day. It was like going to Maine for the day with the lighthouses and everything and Lake Superior looked like an ocean to me! What a fun day you had!