This week I will introduce you to my *fathers paternal relatives.
We have to go back to Isak, in Finland.  Isak was born out of wedlock to Liisa Greta Lahti Yliniemi on September 19, 1857.   His  mother was a widow who farmed, and his father was a farmhand named Juho Mattias Ala.
In June of 1880 he began the first leg of his trip to America.  Young men were being drafted, Finland was under Russian rule at this time.  Isak crossed the river to Sweden and shortly after that made a raft out of logs and along with several friends they floated down the Muonio and Torino rivers to get on a sailing ship to America.  He was not only illegitimate but a draft dodger. 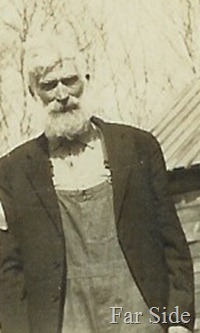 He arrived in New York City..traveled on and settled in French Lake Minnesota.  He became sick with typhoid fever.  After he recovered he helped to build the Apostolic Lutheran Church in French Lake.  He met Margaretta while working on the church and they were married November 29, 1885.
Margaretta was born April 3, 1867 in Finland to Briita Lissa and Alexander Impola.   Isak would have been 28 and Margaretta would have been 18 years old when they were married.

They would become parents to thirteen children. While in French Lake Margaretta would give birth to six children, Greta who died as an infant, Maria, Joseph, Samuel, Isacki and Mikael.
Times were tough, so Isak decided to move his family north.  He traveled with two horses, a colt, cook stove, barrel of salt pork, and three small children Marie ( Mary) age nine,  Joe age 7 and Sam (My Grandfather) age 5.  They travelled 170 miles north on wilderness roads, he homesteaded a parcel of land in Toad Lake Township Becker County Minnesota.  He built a 10’ x 10’ home for Margaretta.  She followed by train in October of 1896 with Isacki age 4 and Mikeal age 2.  Isak was late picking her up in New York Mills..and while she was waiting she gave birth to John. 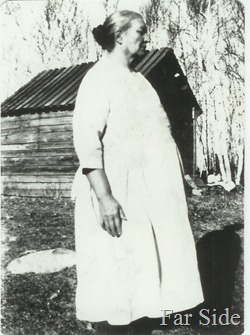 Imagine her thoughts of six children in a 10’ x 10’ house?  She had to put the children outside while she made their beds.  Levi, Ethel, Esther, Ida, Charles and William would join the family. Isak would build her a larger house:)
* Thanks to my sister Julie and my cousin Will for their tireless research.

They were a hardy lot in those days. It's amazing that you were still able to find out Isak was born out of wedlock. These days it's so common that nobody would notice! :-)

We (at least I) cannot imagine the life that those pioneers led. Simply amazing.

Very interesting. They were a hearty breed of people.

Wonderful to know your family history like this ! Now those days were hard times ! Thanks for sharing with us it was a good read and interesting wonderful old photo to ! Have a good day !

How wonderful, I aways enjoy family history and pictures, Francine.

I love your family history posts and the photos are wonderful!

So cool! And many of the immigrants came here to escape the Russian drafts and based on what I've read thank goodness they did! My mother's ancestors did the same thing about the same time.

My paternal grandfather also came to the United States to avoid the draft. That was in Denmark.

It does astound us now in our so simple, so comfortable lives how hard it was for so many people...

I can't enough of these historical vignettes! Think you'll ever make them into a book?
Peace,
Muff

Fascinating! Margaretta was one tough lady. The way I read that, she must have had six more kids after she turned forty. That's impressive, she has my sympathy:( How old was she when she died? ( 13 kids, after she was 28, that's got to take a toll on a body).

Amazing that you found such details. more amazing the rugged life they lived. If I had to live under the conditions they lived in I'd be on the ground crying.

Many of our ancestors were definitely hardy heroes, weren't they? And their whole house was the size of one of our rooms?!!!

I am amazed at the hardships ancestors had to endure!! They are the true American heros.

Now, that's some hardy stock! And rough times. Inspiring to read stories like this in one way, almost shaming in another way. We are so spoiled nowadays. And take it so for granted!

I can hardly begin to imagine the hardships... and living in a 10 X 10 house. (Is that the house behind Margaretta?)
How wonderful to have this information!

Possibly no one really knows for sure:)

Wow, that's pretty amazing. You are from hardy stock!

That had to have been tough going. It is such rugged country. I suppose fish and hunting gave them food but it still seemed risky. What a story of giving birth while waiting for the ride.

Amazing relatives you had! I love those stories and have such admiration for all of them! Looks like she was pregnant in the picture too. Of course, when was she not? LOL!

Could it be possible, that the father of Isak Yliniemi (1857-1932) was english ornitologist John Wolley (1823-1859), who was visiting Muoniovaara in 1853-1857, collecting bird eggs? He is said to get Yliniemi-named female servant pregnant before he returned back to England?
See https://en.wikipedia.org/wiki/John_Wolley

Could it be possible, that the father of Isak Yliniemi (1857-1932) was english ornitologist John Wolley (1823-1859), who was visiting Muoniovaara in 1853-1857, collecting bird eggs? He is said to get Yliniemi-named female servant pregnant before he returned back to England?
See https://en.wikipedia.org/wiki/John_Wolley

Interesting thought. Not sure how we would find out for sure.