Enough already.  I feel like there is a cloud over my head.

We are still enduring the TV saga or lack thereof..the snowstorm/blizzard has postponed the appointment until Wednesday.

Fridays mail was a real treat.  Why doesn’t anyone do their job?  Why must I call them on the freaking phone and point out their obvious errors.  Yes, both calls ended up with positive outcomes..but  I should not have had to waste my time in the first place.  One was a 200 dollar error and the other a 7 dollar error..I can’t even look at it that I saved 207 dollars..because it was an error that should never have happened.

My best advice to you dear readers is to keep all your insurance slips and double check them against your clinic bills…just don’t blindly pay the bill.  In fact I will go one step further and say go through all your bills with a fine tooth comb..looking at all the charges..and for you really elderly don’t pay something because it looks like a bill.   Magazine Companies will do that..it looks like a bill and unless you keep track of what magazines you get and when you paid for them..you could just extend your subscription to some distant time in the future when you might just be dead.

I got a reminder in the mail that I could save oodles if I renew my subscription now..when I checked it is good through August of 2014.  Buggers..they should really pay me anyway what with all the advertising there is in magazines nowadays.  I suggested to one company that they just put all the ads in one section of their magazine so it was easier for me to rip them out.

It is snowing here and has been since sometime Saturday evening.  The cloud cover is so heavy it looks like it is dark in the daytime. 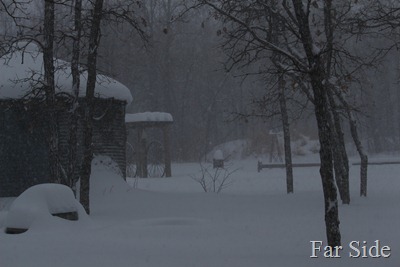 Chance is less than thrilled about snow that he has to drag his belly through. 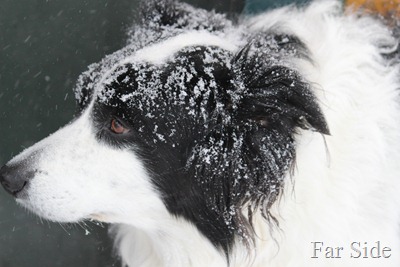 He collects little round balls of snow on his belly and the snow packs in between the pads of his feet.

We are staying at home for the duration of this snowstorm that they named Orko.  Far Guy says it is possibly the most snow that we have ever had here. Last night my other baby brother stopped by and he reported 13 to 15 inches of the white stuff..and it was still snowing.

I like the moisture that the snow will bring come spring..but do we have to get it all at once?  Couldn’t it be spread out over a week or two:)

Snowing here too. Just got back from walking Amy, she came back with snowballs on her feet as well.

Be safe. Good advise on all

Chance looks quite regal, even with snow in his fur. Wow, that is a LOT of snow! I hope it has stopped by now. I know I will see pictures of it. Where is the snow stick? :-)

Stay safe. I think we are missing this newest snow storm . Just getting some really bad wind gusts. Isn't that the truth about bills. I have to go over bill that comes in because companies are trying to sneak new charges in all the time. Maybe it is time to try to simplify our lives and just do without so much "stuff".

Ahh poor chance, do I need to send along some booties? If so, email me your snail mail address and I'll make some up for him! As for insurance and doctors, pay attention to those bills regardless! I work in insurance and still am amazed at what the charges actually are for stupid little things.

Holy cow, that's a lot of snow!
I hate that the magazines send out those renewals. It really confuses Mr. Dreamy's mom... especially when she gets them monthly.
Stay warm and safe!

I remember going into my check book register to see what date I had ordered a magazine because I got a renewal notice. Sure enough it was not time to renew it. Well I guess you can renew at any time. I just ignored the notice.

Holy buckets, that's a lot of snow. Stay dry and warm. If the sun would come out it wouldn't seem so bad!!!

I LOVE the idea of magazines putting all their advertising in one section so we could pull it all at once. That's a good suggestion. It almost seems like the articles are fewer than the ads. I know they do it to keep the cost down to us but it's also costing them more in paper and ink.
That is a great picture you took of the storm - - it definitely captures the gloom of it.
Poor Chance - - I know he loves outdoors but my thought is he is probably barely tolerating the current conditions.

Your weather looks dreadful. Poor Chance! I have a couple of elderly friends who are always so upset by mail that looks official when it is not - it is a shame that companies get away with stuff like that.
Hope your weather improves and you all can get out and about.
We are cooped up from lots and lots of rain here.

Only rain here and I am very happy about that.

The storm dropped 8 inches here, but I would have welcomed more.

I agree that vigilance is needed when statements arrive in the mail. I got suckered once on a magazine renewal, and now I keep a list of renewal times.

I got a "cute" marketing letter from a car dealership that looked like a government tax document. I promptly wrote a note that I did not appreciate their marketing strategy and that I found it childish and deceptive. I told them if they ever wanted my business to not send anything like it again. I popped it in the mail - I wonder what they thought when they received it back?

We had that snow last week and now it has rained is windy and warmed up ! Miggs gets the same way with the snow all stuck to her ! That's why I don't by magazines Much anymore cause there is more adds in them then anything and it get's annoying ! Stay safe and cozy Spring will be soon !

You got a lot of snow. We didn't get anywhere near that much. But what we did get is blowing around causing all the schools in the area to close. I will just stay in until the blizzard ends.

So I take it that the snow stick isn't nearly getting to the spring mark yet ;)

What a mess. It stayed north of us but then we didn't get any moisture, which we do need. Barney was scared of the wind today as it was so bad. Once the daylight hit he wasn't afraid of the freight train that he though he was hearing.

Thanks God we missed the brunt of the blizzard. Mostly rain here. As to bills thank heavens Mrs. T keeps everything and checks it all twice. The mountains of paper she saves and accumulates boggles the mind. But I sleep better because of it...;)

All that darkness has to get to you! Hope the sun comes out one of these days. (They told us we'd be getting 7 or 8 inches of snow, but I think it was only about 3, and we were glad.)

Someone sounds like they have cabin fever...and for a good reason...that's lot's of snow.

I totally agree with you about checking the bills....and I have one magazine subscription that mails me out a bill each month, it's good until September, and they have been doing that since I subscribed two years ago. And now they send emails....all that money wasted....no wonder they are so expensive.

You are absolutely right about checking your bills. neat keep all receipts and paper work. I know it's a pain but it saves pain later.
When the snow stops and the skies clear , just think how good it will feel.

You are right about paying more attention to what you get in the mail. My DH decided to take over paying the bills about 3 years ago but I am the one that has to argue with companies about over charges like you said ..SO now I took them back and am having a hard time cleaning up his BooBoos. I should have it all taken care of in a few months..I HOPE
Not a lot of snow here but is cold and dark and gloomy..come on spring

I like where they send a bill to renew and you look and the renewal isn't due for another 6 months! Everyone is out to take your money if they can!

Wow. They only got 9 in Muskegon over the weekend.
Stay warm!

Ah poor Chance! He looks lovely though. Enjoy the snow, if you can.

Snow all at once is no fun, we got 16 inches just before Christmas, but haven't had any to speak of since then, and it's mostly gone. Chance does look less than impressed. It's hard work getting through all that snow when it's higher than your belly!

I am right with you about the magazine re-subscription mailings! I always check and sure enough they start sending those out a year before it's due to expire!
I love your picture of the snow and I listened to the weather channel during Nemo and Orko....I'm a weather nut! I was living vicariously through those snow storms. Of course, I don't want to lose power or have to shovel either! LOL! We are supposed to get snow tonight...maybe 2-3 inches but it won't last. I'll enjoy it at the time though. I've got the wood in for a fire and dinner made. Getting ready to make some cookies and then "let it snow"! Don't overdo it up there! Nitty loves snow but if Annie was up there she'd have to tunnel she's so short! LOL! Take care!

All that snow wow! I guess my let it snow sign isn't working. I put it up right after Thanksgiving and it's still up with no results except a dusting! Bummer!