Saturday was the VEX Robotics Tournament in Northern Minnesota.  Son In Law Andy is a Robotics Instructor.

Students ages 12 and up build robots and compete against each other.  Noah is on a team, Adam is not quite old enough yet. (He served as a volunteer.)

There are two competition fields..so there is no waiting between matches.

The kids build their own robots and tweak them during the competition after their turns…at the end of the day they should have some of the kinks worked out. 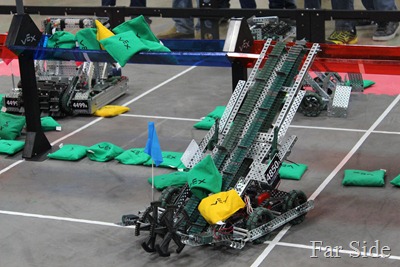 The competition this year was called Sack Attack.  The sacks had to be picked up and put in the troughs, high goal or floor goal to score points.  The yellow sacks were worth the most points.

“The robotic competition provides young people the opportunity to experience the power, excitement and fun of science, technology, engineering and mathematics in an affordable, accessible and sustainable way.”

I saw team interaction, family support..and lots of kids having a blast!  It is a wonderful activity for kids during the winter:) 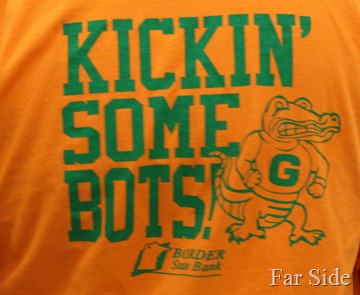 Morning, wow!!!!! how neat is that, good family fun, Francine.

Being a past horse owner, I first thought it's too early for bots! Then I discovered you were not talking about pesky flies.

This looks like a lot of fun! You're right, it's good indoor fun for a place where winter last awhile. :-)

My son and grandson do something very similar to this except they do "combat" with their bots (it is "Battle Bots" like in the old TV show). It is a great family fun thing to do.

Looks like fun ! A great way for kids to use their imaginations and building skills ! Have a good day !

Such a clever invention...I remember this from last year. I was also reading about the boy behind the Verizon commercial, he has severe allergies, and a "bot" goes to school for him.

How neat! I thought I might have seen some erector set parts in the picture. That brings back memories. But me and my sons never got to build robots....:)

Love it! This is such a great program for kids. Both my boys did some sort of Robotic program similar to this - I think one did Vex, another did FLL (First Lego League). I wish more kids could have this opportunity - I wish schools would include it in their curriculum - but that might interfere with teachers teaching to the test and throwing facts at the students. I will stop, before I get started on my tirade!

This is so cool. And I was happy to hear about all the teamwork and support, too. What a great activity.

Our school is involved with this. Our Iowa groups met a few weeks ago to compete. I didn't hear how they finished but did seem them on tv. It is a great competition calling our for higher order thinking skills and creativity.

I remember that from before, love it! What a great thing for kids to be involved with.
Bots to me are the tiny yellow eggs from the bot fly that we used to pick off our horses legs:)

Sounds like fun. Again kids learn by actually doing something hands on. Family and community support is key.

That sure sounds like fun, my son would of got a kick out of that!

I do miss the show Robot Wars.
Congratulations to all the kids! Those robots look great. :o)

I think those events are some of the most fun!!! I wish we'd have had them when I was in school.

I think that's wonderful being a science/math technology person myself. I saw it on one of the news programs too. Not sure if it was MN or not but hands on is such a great way to enforce learning and peak their interest. I like their slogan! LOL!