Soldiers..we had a few in my fathers family over the years.
My Paternal Grandparents had twelve sons, five who would serve in the Armed Forces.
My Grandmother must have been beside herself.. the worst news came in 1944  May 20 my Uncle Arthur died and was buried in Italy.  He was killed during the invasion of Italy. He was in the Army 1943 to 1944. 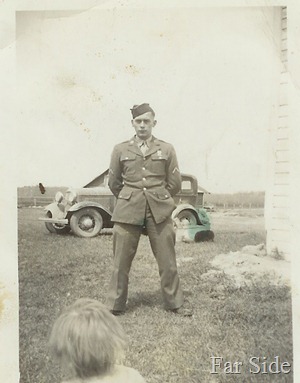 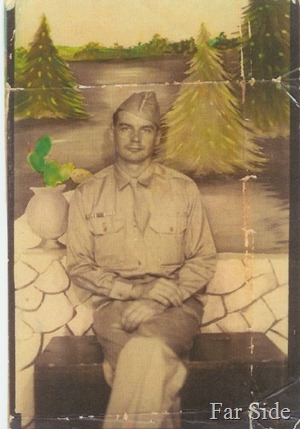 My Uncle Hugo served most of his time in Sicily during WW2 where he was wounded.  His left heel was shot off and he had numerous shrapnel wounds in his back near his spine. He was in the Army from 1942 to 1944. Some of that shrapnel remained embedded near his spine until his death in 1987. 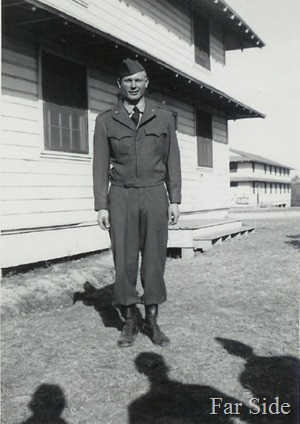 My Dad was in Korea when I was born. He was in the Army from 1950 to 1952. Dad was wounded when a round hit his helmet..he didn’t want anyone back home to worry so he never put in for a Purple Heart..but we have photos of his bandaged head. 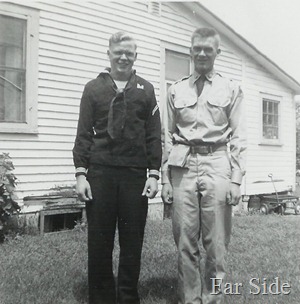 My Uncles Arnold and Andrew served almost at the same time.  Arnold was in the Navy from 1952 to 1956 mostly in Cuba, and Andrew was in the Army from 1953 to 1955 mostly in Hawaii.
This photo was taken when Arnold and Andrew came home for their Mother’s funeral in June of 1953.  She died of a massive heart attack.
I often wonder..Arnold enlisted in the Navy so that perhaps Andrew would be passed over for the draft. Andrew was a sickly child and teenager..frail..and his Mother worried about him.  ( I think that he was also one of her favorites.)  She died shortly after he was drafted, coincidence..maybe..maybe not. 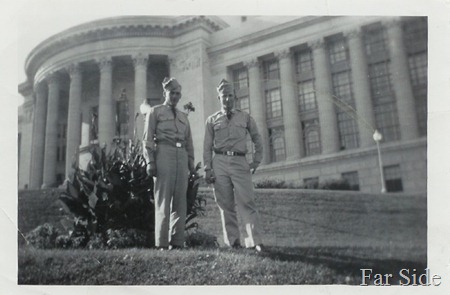 Anyway..this is the photo I wanted to share today.  My Uncle Andrew on the left with one of his buddies.  Look how close to the White House they are…I bet they strolled through the grounds and probably went inside too.  President Eisenhower would have been in office then..a Military man.  The entire inside of the White House went through a renovation during the Truman years 1945 to 1953.

We should remember our soldiers not only on Veteran’s Day and Memorial Day.. but other days as well.
Lately the subject of women in the battlefields is being debated.  I say ask the women if they want to go to the front lines..if they want to go then let them..I am sick and tired of a bunch of men telling women what they can and cannot do:)

Update: There is some discussion,  is this the White House or not..I have searched for photos of buildings with columns in between the windows to no avail..if it is not the White House what building is it?
Posted by Far Side of Fifty at 5:04 AM

Morning, enjoyed the Soldier post, love all the old pictures you have....My Father faught in WW11,we were blessed he came home healthy.......Blessings Francine.

Here , here ! I agree, us women are the stronger species any ways ! It should be up to the women soldiers if they want up at the front line so be it, besides women are smaller lighter and quicker better for the job ! My dad was a British soldier in WW2 in Singapore he was a sniper and at age 16 if they can handle it at that age back then , then women can handle it now a days , back then it was a lot more brutal and gory I have heard all the war stories from my dad and they are a lot worse then they are today and My uncle also was British solider in WW1 so the stories then were eve worse total brutality ! Loved the old photos ! Have a good day !

Loved your post today. Thank you for sharing the pictures. My father served in WWII. He was a navigator on a B-24 Bomber and was shot down over France. Thankfully the crew was rescued shortly and the only injury he sustained was a broken finger. Thank you to all the Veterans and active duty military.

So fun to read your stories of the family and see the old photos. Your last comment is so true and it made me laugh!

Great post. I love all of the old black and white photos. What brave young men.

Wonderful post. Your families have given a lot to keep our country free and safe. When are men going to stop telling us what we can or cannot do.

Great old soldier pictures.
If a woman wants to go to the front lines, let her go.

We owe a debt of gratitude to all those who have served this country over the years. God Bless every one of them!

Your photos are great, especially the last one.

My father was in the Air Force during WWII and retired from it much later. My brother served, and my niece is still in the Army, along with one of my nephews. I really enjoyed this post, and you are right: if that isn't the White House, then where is it???

I love me a man in a uniform! My father, both grandfathers and my son...all wore a uniform!

I loved seeing all the old photos of the soldiers in your family. I have similar ones of my uncle who was killed in WWII.
I came back today to follow you.

With so many sons, your family--and especially your grandmother--paid quite a price! Thank you for sharing all these photos and memories, as difficult as they must have been at the time.

I say it is the White House. http://www.trustedtours.com/store/washington-dc.aspx

12 sons? That's amazing! It's also the luck of the draw that there would be some armed conflict during that span of sons.

Love the photos and history of your military family members. My Dad and all three of his brothers served in WWII. I can only imagine what their Mother must have felt about that! All four of them survived into old age, thank goodness!

After looking at photos of the white house from that era, I do not think that is what they are standing in front of. The windows do not agree with any of the historical photos I have viewed. Where is it then, if not the white house? Like you, I have not had any luck in finding a match. Do you recognize the plant they are standing by? Almost looks tropical? I don't know, but thought it might be a clue to the area.

The plants look like Cannas to me..I have searched and searched ..no idea yet what that building could be if not the White House. Thanks for looking:)

It may be the House of Representative Building. I just googled some pictures of it and they look similar to your picture. They have added to the building over the years according to the quick research of the history of the building I just did. The latest addition was done in the mid 60's.