My paternal Great Grandmother (Kaisa) was born in  Muhos, Finland in 1867.  Six years earlier in 1861 my Great Grandfather (August) was born in Ylivieska Finland.  The towns are ninety miles apart.  So it is doubtful that they knew each other in Finland.

August was an only child..although his father had been married twice before to women that already had children.   August came to America in 1877.

Kaisa may have had brothers and sisters..her family history needs some close inspection.   Her parents left her in Finland while they went to America. She was working as a maid and her parents left her two cows to pay for her passage to America.  She was 16 years old.  She apparently sold the cows and came to America in 1883.  Sometime later her parents would return to Finland..but I don’t know why or when.

In August of 1883 two months after getting off the ship Kaisa married August in Michigan..she was 17 and he was 24.  Young love?  He was a miner working in the Copper Mines and a logger.

They had 12 children and adopted a grandchild after their daughter died.

Most of their children were born near Dover Creek Michigan.  In 1903 Mike died  of a burst appendix at the age of 19, in the same year Annie would die of pneumonia after having the mumps at the age of 18..leaving behind a daughter born in 1903 whom my Great Grandparents would raise as their own child. My Grandmother Hilda would become the oldest by default after her older brother and sister died.  In 1906 a baby would die. 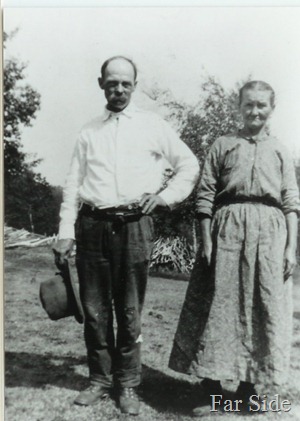 In 1906 August and Kaisa would move to Becker County Minnesota. Land was the lure.  Farming must be easier than mining.  They would leave my Grandmother behind, she was 17 and had a very good job working as a housekeeper in a fancy house where the lady of the house would inspect the maids work with a white glove.  My Grandmother had a few suitors in Michigan..she loved Michigan and would return there to visit many times throughout her life. 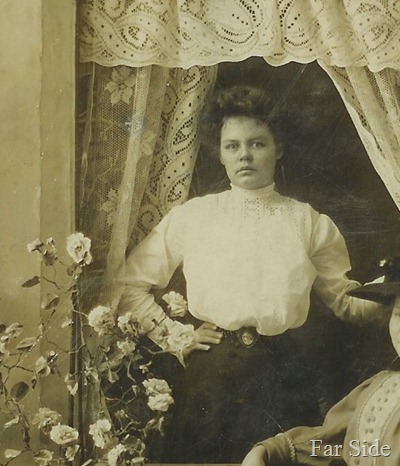 In January of 1910 my Grandmother (Hilda) would come to Minnesota she was 21 years old.  She followed her family here, perhaps she missed her family.  Perhaps she got a letter from her Mother asking her to come..who knows?

My Great Grandparents  would suffer more grief.  Olga would die from meningitis the next year (1911). Olga was 13 years old. Two months after Olga’s death baby William was born and died the same day.

In 1918 their son Oscar would die of influenza during WWI.

In 1919 their remaining children would be Hilda (my grandmother), Andrew, Elina, Katie, Pearl ( adopted granddaughter), Mayme and Emil.  My Great Grandparents would live to bury half of their children.  Everyone in the family would treat Aunt Pearl like a real Aunt instead of the grandchild that she was.

Some of my thoughts:  Who would leave a 16 year old behind in Finland to come to America by herself?  Two Months..they knew each other two months or less and they were married..but the marriage lasted 58 years until August’s death in 1941.  Perhaps they grew to love each other after the sparks of young love wore off?  It must have been devastating for my Great Grandparents to endure the deaths of so many of their children.

Family History seems to make me ask more questions..I wonder if the answers are out there someplace.  Should I just be happy with the information I have or are these just pieces of the puzzle?:)

You are right, more questions than answers, but that is the attraction of family history. The fascinating thing about family history for people in America is that at some stage there will have been an ancestor that made a life-changing move.

So much heartache in their lives. It would certainly be interesting to have answers to many of our questions.
Perhaps blogs will give future generations the answers they need.

Back in the 1880's a 16 year old was not the same as a 16 year old today. I've heard that my grandmother came here alone when she was 15. People grew up much with responsibilities much earlier than we did.

It was a different world back then, but the loss of children was an almost inevitable part of it. It seems they had more than their share. Your great grandparents were really exceptional people, which doesn't surprise me at all. You are, too! :-)

What a tough life then. And losing all those children. Nothing is worse. I know....

I doubt you'll leave these questions unanswered without a little more investigation ;-).

So interesting but sad times back then......So wonderful to have those pictures, love the old black anf whites, Francine.

No way....keep looking! You'll be amazed what you might find!

Wow, you do have some family history. If only the question Why could be answered. I guess when you say Uff-da you have the heritage to back you up!!!

I love your family stories! Children's deaths were almost a fact of life back then -- one of the reasons they had such large families! It still must have been difficult to bear, though!
Peace,
Muff

I can see you in your Grandmother Hilda's face. Both very good looking.

Because of the state of health care at that time many children, young adults and adults died. For each child they lost there must have been the extreme grief that parents experience with the loss of a child. You look at grand parents and great grandparents and wonder at the hardships they endures. These two were able to support each other for close to 60 years. Amazing.

Facinating! You have a lot of info--census records? Life was difficult in those days. My father-in-law was one of 13--born in 1918,7 of them made it to adulthood. I think about average for that time. Knowing your family history is a satisfying thing. Thanks for sharing.

Absolutely riveting even though I am not related. True stories of real people to me are far more interesting than anything anyone could make up. Although, I have absolutely NO interest in any of the reality shows out there because to me those can't be REAL people...really? I admire that generation exactly for the same reason that my heart goes out to them....the hardships they had to endure and the pain and suffering and yet I can't remember my relatives ever complaining or talking badly about anyone or arguing among themselves. They endured and they never said a word. Nowadays, it's all about self-pity and whining about every little thing. What happened to those coping genes that your relatives and mine had? We need those genes for survival of the species! The whining, victim genes aren't going to do it....we'll go extinct, and soon at this rate! Thanks for sharing....I'd dig for more if you have the time and the interest. I started with Ancestry.com for $30.00 until I discovered it was $30.00 per month! NOT! And most of the info I got from them is public record stuff anyway. Good luck!

Your grandmother was a beautiful young girl. It was interesting for me to read the story of your grandparents. All four of my grandparents were Finnish, three of them immigrants at very young ages. My maternal great grandparents married in Michigan at 16 and 19 and lived a brave and adventuresome life as pioneers into NW South Dakota when the Sioux were still using the area as a hunting ground. I spent some time researching their lives and writing about them and their six girls and six boys; through that I fell in love with them anew. How I respected their sisu and bravery.