“The joy of brightening other lives, bearing each others' burdens, easing other's loads and supplanting empty hearts and lives with generous gifts becomes for us the magic of Christmas.”

I knew the gifts were coming, my baby brother told me that they would be arriving sometime before Christmas or shortly thereafter.

When he was visiting here last week, he saw a need.  As soon as he got back home he put in the order.

The packages were delivered yesterday by Fed Ex..Chance got a treat.

I called my baby brother and asked him when he wanted them delivered.  He said “Anytime you have time to set them up.”

Far Guy and I took off for the Nursing Home so that the ladies would be able to play with their new gifts right after supper. 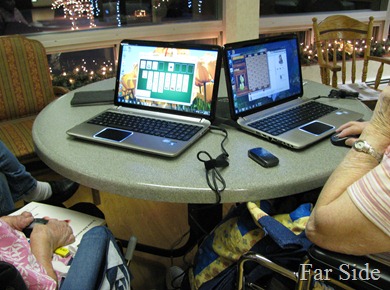 He sent beautiful new HP laptops to Mom and to Aunt Lila. 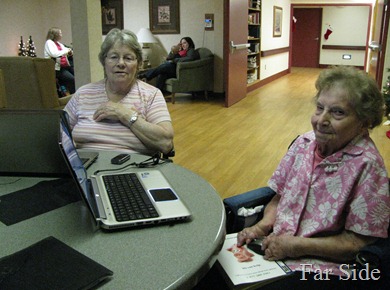 Aunt Lila is sharp as a tack, she has rheumatoid arthritis.  She is a computer whiz..the wireless mouse worked perfectly for her when placed on a phone book in her lap.  One of her favorite games is Bookworm..so we loaded that software on both computers.  They were busy playing Bookworm and Solitaire and smiling.

No one at the Nursing Home knew what the wireless security key was..so they cannot get on the Internet yet..maybe tomorrow.

So just in case you were wondering..Santa lives in Oregon and my brother knows him personally:)

Your brother is a SAINT! What wonderful gifts and so good for these women...keeps their brain sharp! I'm impressed.

What a wonderful brother you have!

Thats awesome ! A wonderful idea ! Have a great day !

Yep, he DOES live in Oregon! What a wonderful, sweet thing to do... and I cannot believe the nursing home doesn't even know the wireless password. But then again, most of the people there lived without the Internet and don't miss it as much as you and I would! :-)

Your brother is so observant, and then acts immediately! Bless him! I'm glad to see pics of your Mom and your Aunt Lila. I met Aunt Lila once while visiting Ethel Burlingame (senior moment here; can't remember her married name). The coffee was not forthcoming from the kitchen and Lila sped around in her chair and got things moving. She took time off from her computer to help!
Hope everyone continues to heal.

Send your brother a virtual hug: he is the best!

Mary Dowling..Ethyl Kivinen..her Mom (Amy) and my husbands Grandmother (Meade) were sisters..Ethyl is doing great..but she cannot see very much she has macular degeneration. She goes over and visits Gladys in the Memory Unit:(

What a wonderful Santa you have. We did something similar for my 90 year old father-in-law except we all chipped in and bought him a iPad. Dad doesn't like computers but thought all the neat stuff he could do on an iPad was cool. Santa does live on, in Oregon and everywhere else.

That is so sweet! When Jack's dad was in the nursing home I was shocked to see the men playing Wii! I hope I can keep up with the ever changing technology!

What a wonderful brother and family you have, he certainly knows where Santa lives..too bad that Oregon is number one on the list in the whole of the USA for hunger for their citizens, a beautiful place to visit but I would not want to live there, did that left at 18 never to return, lovely ocean, mountains but no JOBS, no FOOD and a governor on his third round of being a governor commuted a killer who wanted to die who killed people.give me a break, good you posted what you did..but OREGON no no and more no on hunger, no jobs, lots homeless too...just saying!!!!!!!

You brother is a very special person. So often you see people in nursing homes just sitting around staring into space. What a wonderful gift to keep people connected to the world. I am just 2 weeks away from my 75th birthday and if the day ever comes when I have to go to a nursing home, I hope someone remembers I love to play computer games!

You brought me to tears with your heart warming story.
It's so nice when someone see a need and is able to do something about it. Nice to see their smiles.

What a wonderful gift for everyone! Yes, Santa does live in Oregon!

These two look like they really enjoy their gifts. Good for them that they can play games and use the internet.

How sweet! I think it is so wonderful when someone sees a need and fulfills it. Your brother must be a wonderfully, kind person. I guess your parents raised you all right!!

Very nice gift - busy work! One is never too old to "believe" in Santa Claus!

That is awesome!! So very glad your brother knows him personally. This just made me go--awwww!

I hope somebody over there can locate the password information. Bookworm? Never heard of that one. Well, Christmas came early and they look like two happy ladies! :):)

That is so great that they both can enjoy using the computer. It does free them by visiting all over the world or just to play their games.

Santa has some magical Elves.

That is a pure delight!

Wow - your brother is very generous!