Tuesday Far Guy, Chance and I took a little road trip.  We went to Duluth.  It is one of our favorite places..it has a great Train Shop and some antique shops that we wanted to explore. 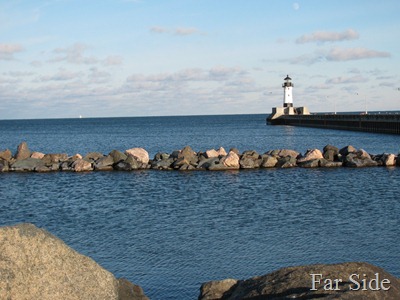 Far Guy was feeling fine when we left.  Along the way he felt like he had a catch in his shoulder that moved to his arm. He thought he had lifted something wrong.

We continued on..in Duluth he started to experience some Chest Pain.  We headed home..we discussed going to the ER on our way through town.   Far Guy just wanted to come home and lie down. He was cold and could not get warm..I had the heater on high and he was covered with a blanket.  At home he rested and took some nitro ( it didn’t help..he had a stress related Heart Attack in 1995) he went to bed, about 11:30 he got up..talked to me and headed to the kitchen to make some toast because he was hungry.  I heard him fussing in the kitchen and then a huge crash.

I was able to arouse him..he asked “What happened?”  Well that is what I wanted to know.  I had him lie still. I said “This is it you are going to stop *******around and go to the hospital.”  I grabbed the phone to call my brother.. My parents and my brother share the same last four digits of a phone number because it is easier for my Dad to remember.  The first three numbers are different.  CRAP..I dialed my parents phone number and my Mom answered.  I hung up.  I redialed my brother..she who sees robins first answered..I said “Send Jody now.”   As soon as I hung up..the phone rang it was my Mom..I told her that Far Guy had collapsed on the kitchen floor but was conscious and I needed to tend to him and hung up.  Jody arrived, he said call 911 so I did. We figured we might need some oxygen and backup.   It was looking very much like a heart attack.  Far Guys Buddies from Carsonville Fire and Rescue showed up..and then the Paramedics.   He was in good hands..but not doing great..his color was like a sheet of paper.  They ran a portable print out of his heart activity..he was deteriorating rapidly.  I said “let’s bring a backboard in here.”  I was certain that he was going to bottom out..and he almost did..he lost consciousness and turned even paler when they administered some IV Nitro.  He was having difficulty breathing and was not “with it.”  The last thing you ever want to do is CPR on people you know..I have done it several times..with no good result.  The situation was rapidly spiraling downward.  (I was an Emergency Medical Technician years ago.)

My Dad stuck his head in the door and said “Send out Jody, Mother fell.”  My parents drove out to see what was happening. Mom fell.  They got her up and had her sitting on a gurney outside the door.  Her hip hurt and her shoulder. They called a second ambulance.

Meanwhile Far Guy needs to get moved on out.  We get him backboarded and up the steps and out into the ambulance.  They ran another strip..the paramedic came in and said “He has a blockage in the lower part of his heart and needs to be air lifted to the cath lab.”  I said “do it.” After some more farting around..they leave for the airport.

The guys move Mom who is now on one of my kitchen chairs outside covered with a blanket, inside onto the landing. ( area where you can go up or down) We wait for the next ambulance to arrive.  The paramedic doesn’t think Mom broke her hip.

I call the girls and pack a bag.  Jody gets all my stuff into the car and Chance and I trek to Fargo 90 miles away. It is 1:11AM. There are herds of deer along the road..but no traffic.

At 2:12 the phone rings..it is Jen.  She was there when the helicopter landed after a 25 minute trip. She reports “ Dad was talking and they took him right on into the cath lab.”  BIG sigh of relief..talking is a good sign.  I was nearly to Hawley.

I arrive at 2:45AM to fill out paperwork.  The phone rings Jen says “The Doctor is coming out to talk to me..better hurry on up.”   The Doctor that performed the cath found no blockage and reports a healthy heart.   I am dumbfounded..why then did he exhibit all the signs???  The Doctor doesn’t know..but they will run more tests in the morning. Far Guy is stable and has no chest pain.

We get to see Far Guy..I told him “You scared the crap out of me.”  He says “I already told the Nurses not to listen to you.”

Trica arrives with the Grandgirls.  Far Guy has a room full of girls that love him!  He gives me a rash of shit when he asks about Chance and I say “He is in the car laying on your down coat and toasty warm cause it is 30 degrees and he has a little of his own hair too.”

I put Jen in charge of the cell phone.  Jody calls with a report about Mom..she has a dislocated shoulder and has broken her pelvis in three places.  She is being transferred to a hospital with an Ortho Doctor where they will be able to give her pain relief.  Damn..double damn.

Later we decide to send Chance home with Trica and the girls..they leave about 5AM..there is nothing to do but wait anyway.

Throughout the night they ran blood tests.  They run EKGs..and in the morning..it is now Wednesday they run an Echocardiogram.   The Cardiologist waves to me..goes into the room and has a quick look and says “His heart looks good..the function is fine.  Your husband has inflammation of his pericardial sac.  (The double walled sac that surrounds your heart.)  It is treatable.  It is caused by a virus, it happens sometimes..we see it occasionally.  He will be fine..don’t worry.  It presents just like a Heart Attack..and until we can rule a heart attack out it is treated just like one.”  He patted me on the shoulder and said again  “ He WILL be fine..don’t worry…he can go home this morning.”

Jen left..because she hadn’t slept all night. There was lots of “no sleep” going around.  We finally got all our instructions and left too..170 miles later we  picked up Chance and a prescription and stopped by the Nursing Home where my Mom will be spending a couple of weeks.  She was not there yet..we were both exhausted..we came home and took a nap..the phone rang off the hook..I was just too tired to answer it.

I spoke to Mom later..she is in considerable pain.  My sister was with her Wednesday..and my brother from Oregon will be here soon.  Prayers for my Mom would be greatly appreciated.  Prayers for pain relief and for a complete recovery.

Far Guy could always use a prayer too..I am still a bit miffed with him for scaring me half to death.  He has no chest pain..he has some pain at the cath site and is supposed to take it easy for a few days.  I have had enough excitement to last me a long time..:)

Labels: EMT, Far Guy, My Mom, My Mom is eighty