This is a photo of Far Guys Maternal Grandparents.  This was taken in December of 1969.  The year that Far Guy and I got married. 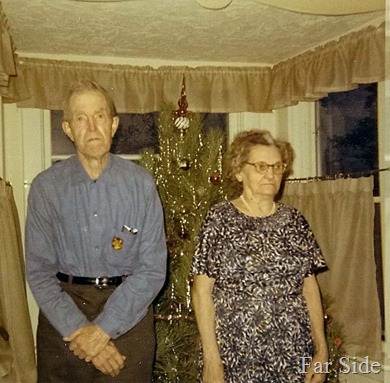 I am not quite sure why these two got married?  Opposites must attract.

Curt was kind and gentle, small things delighted him..just visiting brought out the best in him..he loved to read..mainly westerns.  He always sat in an old oak rocker.  He was tall, he walked bent over..his hips and knees had seen better days and he walked with a cane. He died in 1973 four years after this photo was taken.

Meade was ornery.  Of course we have to cut her a little slack, she almost died from Tuberculosis.  She was in the sanitarium for many years. The TB destroyed her hearing, she was deaf and refused to learn to read lips or sign.   Everyone used the “Magic Slate” to communicate with her.   She would talk to herself..of course she could not hear herself..she often cussed under her breath, or so she thought.   She did beautiful handiwork, embroidery and crocheting with fine thread and a very small hook..until she lost her eyesight.  I have many of her works of art.  She lived a good long time. She spent 17 years as a widow.

Curt liked a “nip” occasionally and kept a bottle hidden in the barn.  All the Grand boys knew where it was hidden.  If he went to town with Walt the next door neighbor, Meade would be sure to send Alaska Guy along..thinking that they wouldn’t stop at the liquor store for a drink if they had a child with them…she was wrong.  Alaska Guy enjoyed a soda at the bar almost every trip to town…and he was sworn to secrecy.

For a wedding gift we got a full set of embroidered tea towels.  I still have them in the same box with the same tissue paper covering them.  The box was decorated in an odd way.  I wish I had kept it.  Tied to the bow was a large plastic spoon, tied to small holes on the outer edge of the spoon were many blue and pink bows that held about a dozen tiny babies..Meade wrote on the spoon..a little poem..about “spooning” and the result which would be lots of babies!

Our  girls called her “the scary grandma”..because she couldn’t hear she spoke loudly and made lots of extra noises that she didn’t know she was making. Her voice was high pitched and squeaky.  We took them to visit late on Sunday afternoons for years…when she became blind..often she would grab at people..searching for a friendly hand.

One day before Meade went totally blind.  She looked at Far Guys Mom and then at Far Guys Dad and said “ You sure have been bringing that man with you for a long time.” :)