Something or someone tore up my duck..it is in pieces.  Someone must have been playing too rough and been so excited that he just ripped off the ducks feet…one by one.  After that someone took all the stuffing out and chewed up the noise maker.  It was a vicious attack.  Someone spread that stuffing fluff around on the floor and some of it accidently got on my nose.  It looked incriminating..but every dog should have his day in court. Doncha think? 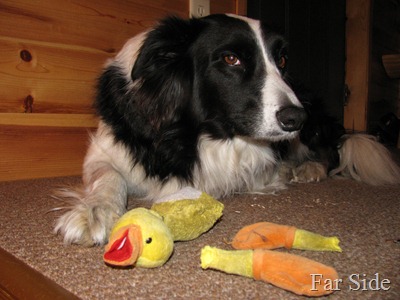 I am in the dog house ..I was out by the wood pile chasing rabbits and got all full of woodchips from the chain saw. I drug a bunch of wood chips in the house on my fur…between that and that messed up duck..I was feeling a little sad.

I was really good during the rescue call the other night..  I tried to make Far Guy all better by licking him in the face.  I did not bark..and I listened really good.  When Far Side said to go lay down I did..and when she told me to come downstairs off the landing I did.  She said I was the best dog ever.  The Fire and Rescue guys all patted me on the head and said I was a good boy too.

Since I was such a good boy maybe someone will look extra hard for a new duck.

Far Guy and I walked to the mailbox yesterday and hauled the garbage to the dump..I make sure he takes a nap every day.

I go along to the Nursing Home..but I cannot go inside because they have a fat girly dog named Maggie in there.  Far Side said “We don’t need no ruckus.” So I stayed in the car and watched other dogs barking in their cars!  Far Side reports her Mom was finally able to sleep a little and she looks a little better too:)

Chance, I'll just bet Santa knows where to find a new duck for you since you've been a good boy! Glad to hear you are keeping a close watch on Far Guy and I'm glad Far Side's mom is resting better.

Chance you are a fine boy. I think someone will find it in her heart to get you a new duck, but I have a feeling you will have to be more vigilant about who you let touch your belongings - somewhere in this tale I smell a rat.

You are a very important member of the family and you contribute greatly to the quality of life and safety too. Our buddie Barney has a nervous condition with soft toys and just doesn't allow them to survive. Button's toys are upstairs or on the Christmas bear tree. Keep up the good work Chance. I am sure grandma will be glad to see you wants she gets better and to be at home.

Such a good boy you are....tell Far Side that Max & Mia saw new ducks in Wal Mart yesterday and to hurry before they are all gone...!!

Oh chance...what a job you have holding all together and you know Christmas is comding so maybe there will be a new duck under the tree:)

Oh Chance, I will keep an eye out or a new duck for you. I agree, you may be the best blogging dog I have ever seen.

Glad to hear Far Side's mom has been able to sleep. :)

My cat does that to her catnip bears. The legs are always torn off so they can't hold catnip any more.

Oh Chance, you have had a rough few days, and now someone ruined your favorite duck. I'm betting Santa will be good to you this year. But you gotta stay out of the woodchips. Be Good!!

You do look a little bit like you're depressed, Chance, in that picture. But maybe it's just because your duck is in pieces. You are the best blogging dog in the world! And I'll bet you get a new duck sooner than you think.

Chance, you were such a good boy when all the commotion was happening at your house that I'm sure Santa will bring you a new duck. Who could resist that face?! You're forgiven in my book. :-)
Glad Far Guy and Far Side's mom are both doing better.

Of course you're a good dog Chance, wood chips or not. They are the downside to having a beautiful long coat. Maybe one time they can sneak you past fat Maggie:)
And I'm sure another duck will be in your future!

You were naughty, Chance but I'm glad that you confessed so all is forgiven..??? I hope Santa can find a new duck for your sock and everything will be better then. I'm glad the Far people are feeling better too.

Chance .I bet Santa will bring you a new duck if you continue to be a good boy ! Miggy does pretty good with her stuff squeeky toys only one has had the stuffing knocked out of it so far lol ! Glad to hear Far Guy and your mum are doing better ! !Have a good day !

Chance you ornery devil. Didn't do much good for Far Side to mend that duck. It kinda reminds me of that big ladybug that Riley received from you. It's down to two little legs now - the other 6 legs have miraculously disappeared. Christmas is coming - keep your paws crossed and maybe Santa will bring you a new duck.

The expression on his face....PRICELESS!

PS...Chance I hope that Santa's little elf get her needle and thread out and patches up your duck before Christmas!

I had to laugh at that photo of Chance....prime!!

I sure hope Santa can find you two new ducks so you have one as a back up in case somebody viciously attacks your duck again. ;)

Glad you hear you are watching over FarGuy.

You were such an exceptionally good boy when FarGuy was sick and scaring everybody. Pets from me, too.

I can see glue in your future Chance.

Poor darling Chance. I know how it is when your whole household gets turned upside down. Sometimes things just happen and ducks just fall apart. I know you'll get a new one because you are the very bestest and sweetest lover boy.

Chance - - - who did that to the duck? It could not have been you because you have been too busy taking care of everyone - - - Far Guy's nap, the trips to the nursing home, and being moral support to Far Side during the busiest time of the year! I am happy that your canine assistance is helping mend your family. You should be awarded "Pet of the Year" - - - or at least of December!

I don't know who would have done that to the duck. Certainly not you, Chance!
Tell your mom that I like ducks made out of latex. I don't chew them up too fast, or too much. I still have a ducky that was given to me over a year ago. Only the tip of his beak his gone... and I don't know who did that. Probably the cat!

I think that you deserve a new duck, and a hug, just for being so good during what must have been a very stressful time for everyone.

Oh dear, I guess Someone is in big trouble...

So glad to hear you're looking after Far Guy.

And glad to hear Far Side's mum is feeling better.

Gracie said to tell you that 'she didn't do it' and that she has an alibi. But I say.. I wouldn't put it past her...
Really though, she got in enough trouble already on Christmas day..