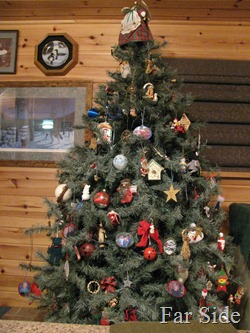 Far Guy was not feeling up to writing the Christmas letter..he is obviously not feeling up to par when he has lost his sense of humor.  The medication he takes for the pericarditis has his stomach in an uproar…but his hips don’t hurt…which he thinks is a wonderful side effect.  He can run faster.

I wrote the Christmas Letter..if you read my blog..then you have some idea what I said in the letter.  It is boring old news with a Merry Christmas attached. However many of the people we send Christmas Letters to do not have computers so they will think the letter is a big deal.  Anyways it went through re writes..and spell check..I wrote a few personal notes..not as many as I usually do..then it was stuffed into envelopes and was mailed today.  After purchasing 120 stamps..I may rethink Christmas Letters and or Cards next year. ( Do I say that every year?)

Far Guy had to totally redo the Christmas mailing labels. His old address list  did not convert to a readable program on his new computer.  It needed some updates anyway…several people have died, some have moved and a few were married. We worked on that list together.

I made a couple of “special” Christmas cards for Far Guy to mail to his train friends.  I mailed off some more packages of ornaments.

I am running the first drafts of some fund raising letters for the Historical Museum.  I call them “ding” letters…they cannot be long and boring..they cannot be sappy and sweet..they should be just sad enough for you to write a check but not so sad that you will have to stop and sob uncontrollably. I am writing to several different organizations and will have Jen ( the English professor) proof them for me before I bring them to the Board for final approval.   Final approval happens the first week in January.  I hate doing things at the last minute…except shopping..shopping always happens at the last minute around here.

I have almost finalized the Christmas Eve and Christmas Day Menus..I still need a couple of recipes..Geraldine’s Flatbread, Jens Cornbread and the Homemade Mac and Cheese that Adam likes.   Andy’s Smoked Ribs, Geraldine’s Baked Beans and our frozen corn off the cob will round out the Christmas Day menu. Oh and Pumpkin Bread..the grand's  favorite.

Tomorrow I am running away from my desk..and running upstairs to wrap packages and possibly getting the Shiny Brite Tree up God willing and the crick don’t rise:)

Mom is able to get out of her wheelchair by herself and walk a few steps with the walker.  She can dress herself including her socks and shoes..so she is almost ready to go home..perhaps the first part of next week.  Her pain is less and she can sleep three hours at a time.

Good to hear your mom is improving.

I just got tuckered out hearing all you've done. From your list, I have accomplished...NOTHING!

Scrooge/Grinch resides here, the original ones not the improved ones.

Oh gosh. I read 'God willing and the crack don't rise'. Haha. I had to reread to see what crack. ;-)

Loved your post, Far Side. Especially the part about your mom making more progress. Glad to hear it!

God bless and have a wonderful weekend. ♥

Your mom will love going home. The nursing homes to me are just for getting better then it's time to go home. They cost a lot and do not carry through with what needs to be done for their patients. Because of where mother was located when she had her massive stoke and the fact at that time I did not have POA to care for her she was in 3 different homes. Some better than others but not good. She will be a little weak and maybe a bit overwhelmed when she gets home but after a few days she'll do great. I'm so thankful she is going home.

This is great news about your mom. She will still need lots of help and care but at least it's in her own home. I look forward to pictures of all that food and the shiny brite tree. You've still got more than a week! :-)

What a pretty tree!
Glad your mom is doing well and will be home soon. But sorry FarGuy seems to have temporarily lost his sense of humor. That's always a bad sign for me, too. I hope he feel better and will be smiling again soon. :)

Happy to hear that you mom is doing better.
I love you tree. Happy wrapping. My husband did almost all of ours this year. Just have to do the things that haven't come yet.
Here's hoping that Far Guy will be feeling back to normal in no time.

You've been busy...I still haven't done much for Christmas other than think about it. I had the same problem with my mailing list and have to redo the whole thing...I just wish things would stay the same sometimes.

So thankful your Mom is improving.

Your mother is making great progress in her rehab. It sounds like she should be able to return home very soon. Good for her!

Great news about your Mom and Far Guy's progress. May they both continue to improve every day.

I have been dragging my feet on sending Christmas cards this year. I think it is time to weed my list.

Oh that's right, Christmas Cards. I keep forgetting and then remembering. I have an idea in my head, just can't seem to let it out. Didn't like last year's, the paper, it wasn't what I wanted, things always seem to fall far short of my vision for them. Perhaps I'll get right on that. Special dinner guest coming tonight, a neighborhood fellow who brings us a trailer load of manure every so often. So I might not get to it today, then we butcher the remaining turkeys tomorrow, I suppose I should help so it won't be tomorrow either, then Sunday Dirt and I should finish the new propagation benches...but Monday I could do it then, mail them on Tuesday, just in time right. See I like you cuz we're so opposite, I love leaving things to the last minute.

Good to hear mom is on the mend. Be sure to take care of her, moms are a treasure, so are dads.

I'm so glad that mom is improving. Hurray!
That's a lot of Christmas cards and notes - you must feel wonderful now that that particular task is completed.
My hubby volunteers at a museum near here. Some days he comes home very discouraged as the amount they may have taken in doesn't even cover the cost of heat and lights. Good luck with your letter.

I hope Far Guy feels better soonest. It's good that you mom is on the mend. How are YOU?

Glad the family is beginning to feel better...

You sound like a very busy lady - great that your mother is getting better.

I'm so glad your Mom is doing better. And to get home BEFORE Christmas is just wonderful...a gift in itself.

Your ornaments are amazing. I so admire your talents, Connie. All of them.

Thankful your mom is improving,maybe she will get home for Christmas. Will your dad be able to take care of her ??
Hope you all have a wonderful Christmas.

Sounds like a super Christmas coming up!
Good to hear that your Mom is doing well.

Would be great if your Mom could make it home for Christmas.
Hope FG stomach is better for your great Christmas meal.

Woohoo!!! Doin' a little happy dance here for your sweet Mama. 'So glad she's on the mend. I've been holdin' her in my prayers.

You are a busy little beaver aren't ya? (say's the Pot) Heeehehehe!

At least you have a most beautiful view from your desk girl.

God bless and have yourself a fantabulous weekend!!! :o)