This photo was amongst the photos that Cousin Bonnie gave to Far Guy.  I have seen it before.

All of these sister in laws are gone..  Cancer..Alzheimer's..and old age claimed them all. 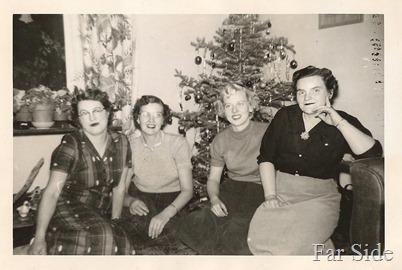 Married to brothers..together for Christmas at the farm.

Far Guys Mom Evelyn is on the left, it would have been her 97th birthday yesterday.  In this photo she was 41 and the oldest. She wasn’t a very social person, everything was prim and proper..nothing was ever done on the spur of the moment.

Auntie Esther is next, she died last December.  She always called Far Guy and I “you kids.”  She was spontaneous..and during the summer at the lake she would almost always be found in her swimsuit.  She enjoyed the outdoors and embraced every activity from hunting to snowmobiling to fishing and of course golfing.

Jean..I won’t call her Aunt Jean..she was divorced from her husband a few years after this photo was taken. Far Guy said she was beautiful and had a mind of her own.  I never met her, she died of cancer.

Aunt Beryl, I have known her ever since I can remember. She had an infectious laugh.  My Mother was one of her best friends. I remember when her new house was built and the white crushed velvet furniture appeared in her living room..I wondered if anyone ever dared to sit on it…us kids always went to the basement!   She had Alzheimer's a number of years..she was gone..but her body wasn’t done living yet..Alzheimer's is a terrible affliction.

I wonder sometimes how these women all got along.  I am certain there were some under currents..perhaps even some teeth gnashing.  They must have all gotten along for the sake of their husbands. I think it would have been interesting to have been a mouse in the corner sometimes:)

How fun it is seein' your family pics. I swear, I could pull almost the same pic outta my trunk!!!

My Aunts were so very different but somehow I'm sure molded my life in someway. Ya know...takin' a village and all.

Heck, it probably took a metro~city full to raise me! Heehehehe!!!

God bless ya sweeite and have a great day!!!

It would be interesting to know if they really liked each other or just tolerated, you know? Of course, the beauty wasn't around that long.

There's nothing better than an infectious laugh. ;) Nice memories, Connie.

The ghosts of Christmases gone before... this one is a good one. I have pictures of my ex-husband and son sitting with my mother. And I'm the only one still alive! These women at least lived good long lives. Hoping I get to also.

I love this post. We all have similar family photos and relatives, and it is just so good to see them appearing in other 'normal' families.

Yes you do have to wonder how the women folk in these larger families got along at family get-togethers. No doubt the daggers were sheathed and the claws retracted, for even though we pride ourselves on being so terribly politically correct nowadays, back then people were polite to each other's faces.

Very different, but with a common bond. Sometimes that's all it takes to get along. Neat picture!

Holiday gatherings are definitely a time to reflect on those who shaped our lives.

Merry Christmas to you and Far Guy. ♥

Sometimes it's easier when you're all different...It's wonderful that you know who's who is so many pictures...

I bet you would have learned a whole lot of things you might not want to know. Hope you two have a wonderful holiday. Bless you.

I always like the way you take an old picture and tell a great story with it.

What a great shot! It does look as if they had some fun together - even if they were very different.