Ornaments from Years Past

We began making ornaments for family members back in 1990.  Our first ornament was a small wooden Loon. In 1991 I painted a Santa or a Mrs. Claus or an elf, in 1992 they were pairs of wooden mittens.  Some day I should photograph these old ornaments on one of our daughters trees..the first three years I did not keep one for us.

Here are the rest of the ornaments through the years. Note there is no ornament for 1998.  It was a lousy seashell that year..our shell is still out in my garage in a box full of seashells.  I heard they were a tad smelly even though we soaked them in bleach..and the sand was an added bonus! I was not going to do ornaments that year because we were in Florida for the winter..and at the last minute I caved. 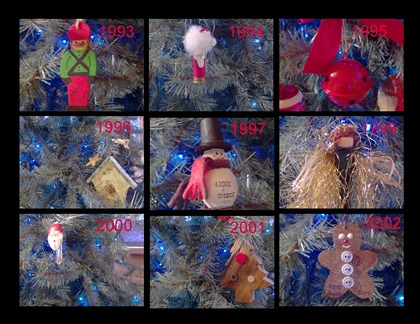 2001 a black walnut tree with buttons. 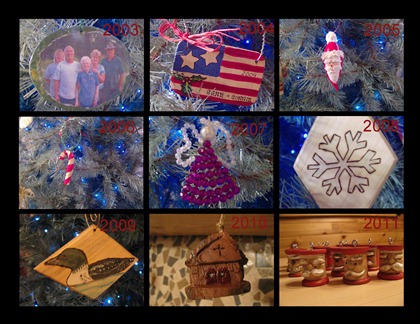 2003 a decoupage photo..everyone was different.

2008 a snowflake design burned into a piece of basswood.

2011 a basswood spool with a hand carved santa face.

It has been an adventure.  The idea behind this little gift is so that when someone gets married and leaves home..they will have a box of their very own ornaments to take along for their own tree. I make them for our brothers, sisters, nieces, nephews, great nieces, great nephews and friends…and a few special dogs and some cats too.

Now for the Spool Santa give away.  Big drumroll. The winners are..

Blog reader Phyllis is the winner locally..I know where she works and I will drop off the ornament there!  Changes in the Wind  please contact me with your snail mail address.  Congratulations to the winners..I wish I would have had time to carve more:)

These ornaments are beautiful--and priceless! I'm sure the recipients will treasure them always. Thanks for sharing the photos!

It is a wonderful idea and each shall have a box of memories.

I love all your ornaments!!!!!

What a great way to remember each Christmas - some very solid - and very beautiful - memories.

I must have started following you in 2009, because I remember the ornament. Such a great thing to do, and some of these are amazing. I guess you have a couple of decades hanging on your tree already. :-)

Sent my snail mail and boy was I surprised!!

It must do your heart good to know that the Loon has the Loon ornament! I do so cherish it as I know your wonderful winners here will too.

Congratulations to Phyllis and Changes in the fab win!!! They'll love 'em forever.

I just adored lookin' at all your most creative ornaments. I blew 'em up so I could see the details.

Wonderful collection!! I love the handmade ones best.

They all are so beautiful ! I love the hand made ones they are so special ! Have a wonderful day !

In my opinion, homemade ornaments are the best ones on the tree.

Congratulations to the winners of the giveaway.

All wonderful! You have inspired me.
Maybe I can make my two ornaments this year, instead of buying them, and then painting on the year. Okay, one year, I did actually paint a map of New Zealand on the back of one, and the Golden Gate Bridge on the back of another. That was to record the trips each of my kids took that year.

I so enjoyed seeing all the different things you've made over the years.
I know I love my Loon.
Thank you for all you do.

So can we just pay annually for a membership into your family? Not just the ornaments but the family history as well. For instance, I was seven in 1965, you could just photoshop me in your Disneyland photo and we'll call it good.

Such cool ornaments! A treasure trove of memories.

It really is a great tradition that you two do each year. The Santas look great.

Wow these are most impressive, what a great tradition to do together. I can appreciate the effort that goes into these priceless treasures.

I think that homemade is the best thing that anyone could give me. I love the ornaments!

I love these ornaments! Such treasures. Congrats to today's winner!

Congrats to the winners!
What a wonderful tradition. I had to blow them up to look at each and every one. You guys are so clever!! They're all great. Treasures! Family treasures!! :):)

An ornament and memory to go along with each year! Those are fantastic and something to treasure forever.

You have a tradition that benefits everyone. You get the pleasure of creating. The receivers enjoy receiving the gift.
Awesome works too!

What a great tradition. That's a good one. I'm sure your children all have great memories of you doing that. Thanks for sharing them with us.

Far Side and Far Guy - these are all great! What a wonderful tradition...

Ooooh I love the loon and the santa cups, very cool!

I loved seeing all of your ornaments. What fun to do something like that each year. How do you get your ideas? They are all so different!

My goodness. You are crafty and what special memories they are. The ornaments are so special.

My favorite one is the birdhouse AND - I love the snowman too.