I have this photograph.  It got me to thinking about Grandma Tracie’s brothers..she had four brothers.  She didn’t talk about them as far as I can remember.

This is all the “menfolk.” 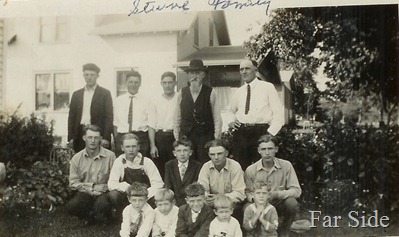 I can only identify five people in this photo.  I think this photo was taken about 1924.  Grandma wrote on it “Stuve Family.”  All these people must have been important to her.

In the back row the old guy is her father Louis, next to him is her husband James X.  The three guys on the left are unknowns ( One could be Great Uncle Rupert.) I will guess they are all married to Grandmas sisters as I see no Stuve look to them at all.

Let’s try the middle row.  Smack dab in the middle is her son Marvin ( Far Guy’s Dad.) The other four are unknown.  However I think at least one of these men was her brother.  Ferd would have been 36 that year and Fred 34…her other brothers were older..Albert was 41 and Charles was 40.

I wish the photo was marked.  Sadly it is not.

I am not sure I will ever get this entire family straightened out.

Mark your photos!  With a date if you know it and the peoples names..first and last.  I  know the location of this photo..it was taken in Park Rapids, Minnesota in Grandma and Grandpa Stuves front yard.

I found some notes.  In 1913 Great Grandpa Louis Stuve farmed. He grew vegetables and sold them, he was quite wealthy, he owned land just south of the hospital in present day Park Rapids.  Because his boys needed to farm he sold his farm to help finance the purchase of three farms.  Albert and Pearl bought the old Becker place, Fred farmed in Straight River Township, and Ferd farmed two miles south of Osage.  They lost everything in the Depression, and the boys disappeared.  Someone heard from them in the 1940’s they wanted some family history.  Great Grandpa Stuve died a pauper in 1932.

Not exactly a happy family history, but a bit of history none the less:)

Oh WOW! What a great photo and post ! I love old photos and history of familys ! Have a wonderful day !

Yes, those two boys in the front did have the same barber, didn't they? That picture was taken almost ninety years ago, so there can't be very many still alive, if any. Very interesting story, even if it's really a sad one.

Fascinating!
I always wonder why, in the old photos, no one ever smiled. There's a whole lot of brooding looks going on there.

I love the little guys. They look full of mischief. It probably took quite an effort to get this many men and boys together. I enjoy your family stories.

Yes, label those photos. When the people who know go there is no one to ask "WHO?"

I enjoyed the look into your past and the handsome men and boys in the photo.

I love the details about the people in the family.

The Depression busted many a family and brought some to a newer sense of close. My mom was the one in our family with the most to tell of how the depression changed their lives. My father always laughed when asked by us kids how the depression effected his family. He would say that they never knew any difference, they were poor dirt farmers before the depression, durring and after.