The grain harvest is starting.  I could tell by my itchy eyes.  I could hear the combines.

I went to have a look see.  Yup, whatever small grain was in that field across from our drive was being harvested by the corporate farmer. 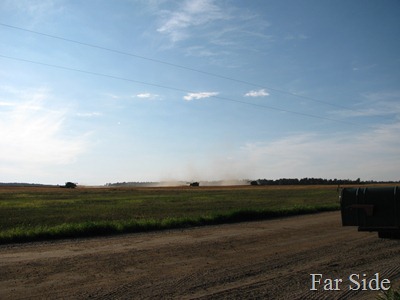 They were creating quite a dust storm . 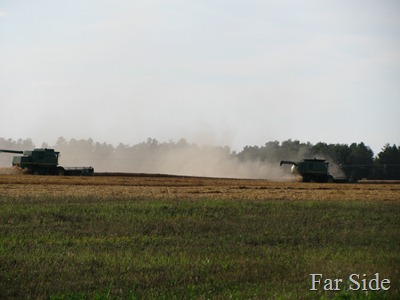 No wonder my eyes were itching, no wonder I felt itchy all over and a tad cranky.  The grain dust..the dust on the road..and it all heads toward the house, even though we are hidden back here in the woods..that dust finds it’s way inside the house to languish on top of every surface.

This is the crop along the front driveway. 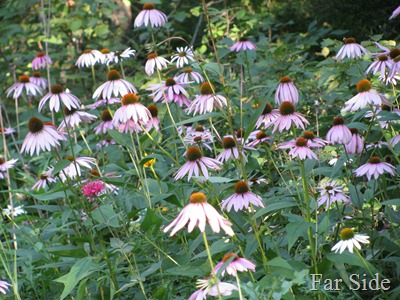 My Purple Coneflowers and the White Coneflower the one called White Swan ( I think).  I planted this area about 12 years ago.   They did really well this year.   I even have a late blooming Monarda..that is a real pretty rose color.  Too much Poison Ivy to get much closer.  I hate Poison Ivy too..although I am all healed up..hopefully for the last time this year.

Someone asked the other day about Far Guys finger and how it was healing after he almost cut it off and then had corrective surgery to repair his botched self amputation.

So this is the finger report:   He has been through two rounds of physical therapy, he has movement, but he cannot touch that finger to his palm.  He can force it to touch, but it just won’t cooperate all by itself.  His surgeon says it is scar tissue causing the problem and he can surgically repair it..Far Guy said “No way.”  I think he should keep doing the deep massage and give it some time. I think that finger may also have some arthritis.. cause Far Guy isn’t getting any younger:)

You would think they would find a use for all that dust, wouldn't you? Although having just had my late breakfast cornflakes - I think they might have already.

Far Guy is right: more surgery, more pain and suffering. He can work with it, just as you said. Glad to hear it's as good as it is. I broke my little finger and it still has a bend in it and won't touch the palm like the other hand's pinky. I don't care, it works well enough!

I have been having allergies from something out there in the wind, but I take my friend Benadryl if it gets to bad.

Glad to hear the finger is healing. I agree with Far Guy - no more surgery. Keep up with the exercises and the massage. As long as he is happy with the results, that is all that matters.

Great post and photos ! Glad to hear Far Guy is doing well with his finger now, as for allergies the only thing I suffer from is Rag weed and there is tons of it around this time of year we used to call it Hayfever back in the day ! Have a wonderful day !

Sorry about the itchies. I don't suffer from that kind of hay fever but I know a lot of people who do. This time of year in grain land has got to be miserable for you.

Well maybe he is like me, not getting any younger, but getting more handsome. ;-)

Yes the fields will be harvested soon, and they sniffles will begin, hugs

If Far Guy is happy enough with the finger, it makes sense to pass on any more surgery. Another surgery doesn't always improve things.
Good luck with the allergies, I'm just glad I don't have any:)

Glad he still has his finger...too bad about the dust and itchy eyes...glad there are some crops to harvest...take care...

Just seeing all that dust makes my eyes itch from here!

Your coneflowers are real nice. I never had the white, but they sure are pretty.

No way would I allow more surgery on Far Guy's finger. I hope in time, more movement will be restored.
Mrs. M. Lane

Connie you are so funny. I would laugh my a$$ off all the time if I hung out with you. I understand how Far Guy feels - I wouldn't want the surgery either if I could use the finger and hand OK. Arthritis - well most of us old people have it - what ya gonna do. Live with it and occasionally take a pill. The flowers are blooming nicely. I would hate to have to deal with the poison. I am highly allergic. Nasty rashes.

It seems to be a great year for coneflowers. Yours are lovely. I would suffer from that grain dust, too.

Ohhh, that blooming dust. Isn't it amazing how it can find it's way into the house and coat everything!

I love coneflowers and have never had luck with them. Maybe here, at the new house! I'd love to have a big stand like yours. Do the deer like them?

Sorry about Far Guy's finger's limitations. Unless it seriously impacts his ability to do things, I'm with the others - no surgery! My mom broke her finger and had pins. She could hardly bend it and certainly couldn't get it near her palm. But, she still did an amazing job of hand quilting - a lot of fine finger work - she just used other fingers!

Makes me itch just looking at it.

Hi Far Side! We had some problems but they are fixed and we are back now :)

I bet you didn't know that driving a combine is on the Duchesses Bucket List! Really!!! LOL.

I have a few coneflowers, too. In fact just before I read this post I noticed they were sorta droopy.. and hubby ran out to water them.
We had that long cool wet spring.. but it's been hot and dry for a month now

I wonder if water therapy would help his finger. Or he could go hitchhiking and exercise his thumb?

Purple coneflowers - - - love 'em! The only other I like equally well are the black-eyed susans. That's the thing with finger surgery. The people I know who have had it have never gotten all the range of motion back either. I have two fingers that are not 'right' on my right hand. I don't want any more cortisone and definitely don't want surgery but I can't bend them all the way now. They thought it was trigger finger but I think there is arthritis in the palm by the way it acts. Oh well - - - wisdom would be nice to know how to deal with it.