The Flags of August

Every year we try to go up to Howard and Trudy’s for the flag ceremony. 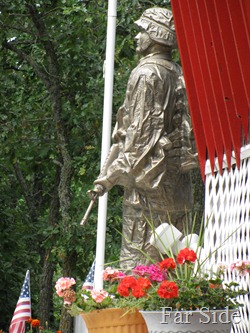 Howard built a Vietnam War Memorial on the side of the hill near their home.  Every year in August the flags are changed.  Yesterday was the day. 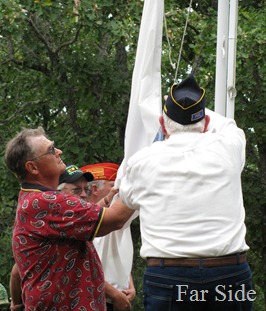 Dave on the left and my Dad on the right.

My Dad helped to put the Army Flag up last year, so he was on hand to take it down this year.  Far Guys Uncle Archie took down the Air Force Flag.

The Marine Color Guard was there. 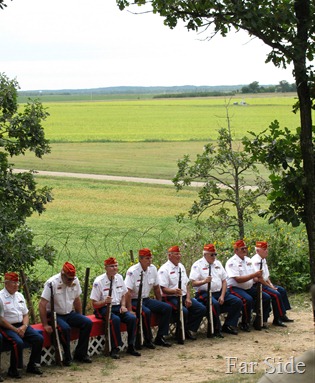 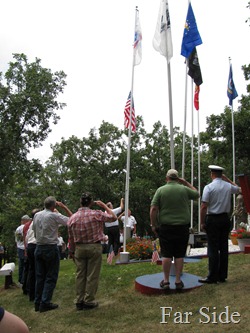 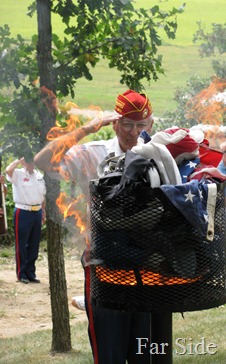 The old flags were disposed of properly.

The new flags hung limp in the summer air.  Old men and young men and women all took part in the ceremony.  It was a good day to remember all the Veterans that have fought for our freedom. It was a good day high on a hill on the edge of the prairie:)

2010 Vietnam Memorial on the Prairie

I am so very proud and honored to be witness to this ceremony. Thank you and many thanks to all who have served.

Thank you for sharing these images with us. Beautiful and moving.
God bless us all.

This is touching. The flags and the men are wonderful!

What a great family you were born into.

Thank you for the remembrances of our heroes. I am always so humbled by those who actually do these things, not to mention grateful...

Wow. What an unusual and beautiful tribute on the prairie.

Very very moving. Thanks to all who have served.

We take our freedom for granted and few American's think about the cost, in lives, of our military involvement. My hubby, a Vietnam Vet, was not treated well upon his return from service. Too many folks confused the 'message' with the messenger. It's nice to see memorials and tributes in surprising places.
Thanks for sharing the ceremony with us!

What a great tribute and annual event to attend!

What an amazing memorial.
Thanks for sharing this with us.

What a great man and patriot. It's very touching. As we know, Freedom Is Not Free. A Thank You seems so small for all our service people give and have given. God Bless you all.

Praise God - - it is wonderful to hear of patriotism; love for our country; and remembering with honor our heritage. Thanks for sharing this.

Wonderful! Another post to past around to other blog friends!

That is such a wonderful thing these people have created. I am glad they continue keeping the patriotism going.