My sister was here for the weekend, she brought Miney and Elvis to visit.   My sister likes to shop..and shop she did. She came back with a kayak…a blue one.  Then all kinds of kayak talk broke out at the supper table, two would be better than one..more people could go.  Fantastic idea!  Far Guy has wanted a kayak all summer.   So Far Guy and Far Side went to town and came home with a Banana Boat..or a yellow kayak.

I got to go for a ride..it was a little tippy. 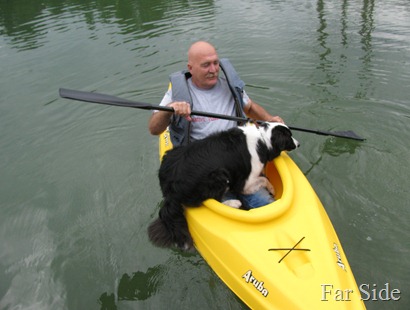 I am not so sure I am a kayak kind of dog?  What do you think?  Far Side says I need a life jacket…or my own tube to float around in. She said maybe I should just watch.. 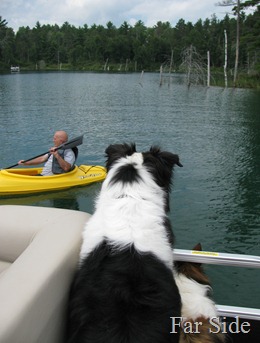 Miney wanted to watch too..I am taller because I put my feet up on the railing…I was almost ready to jump in. 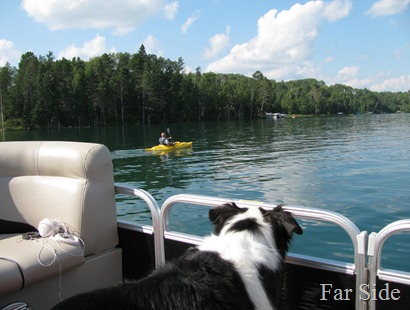 My pal is out there on the high seas all by himself.  I  hope he doesn’t  fall in or anything. ( He did later..and nearly choked to death because he didn’t keep his mouth shut.)   Wanna see the photo? 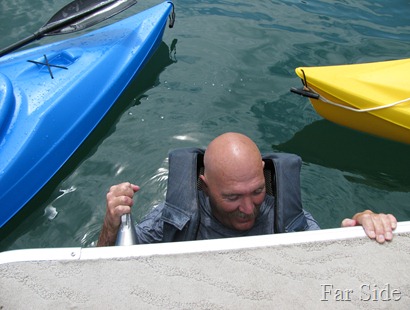 After he accidently fell in trying to get out of the kayak and onto the pontoon..Far Side suggested he zip up his life jacket..so he did, she mumbled something about  “It makes the body retrieval easier.”  :)

What a delightful post! I see Chance is not really thrilled about the kayak.

Great to see every one having some water fun.

Hee Hee (chuckle) - cute post. Kayaking looks like fun but I would have fell in long before Far Guy - love your header.... I just love those chairs! By the way - the bear I posted about is many miles from your place :)

Well, that first picture does make it look like you should get in there a little bit further, Chance. Tell Far Side I LOVE her new header, with the summer chairs and the new kayaks matching so perfectly!

Sterling says kayaks aren't that thrilling either Chance so if you don't like it stay and watch, you'll have more fun. Teddy says they rock though so go figure and we all wear our life vests (zipped up and hooked up!). LOL

Yes, I always heard that life jackets on Lake
Superior were solely for the help in finding your body. My son went out on the ocean the other day but we didn't get to talk about it. I bet far guy will have a lot of fun with it the longer he owns his banana boat. I am jealous.

LOL! I'll bet you'd be the first in the water to "help." Jealous of the kayaks.

How wonderful - you got a breeding pair. Leave them all winter long and you might have a little kayak or two in the Spring.

I've always wanted to get a kayak, but haven't so far. That looks like a lot of fun.
I don't think Chance quite fits, but he's a border collie, he could probably paddle his own!
The photo of Far Guy getting ready to come up the ladder, at first I thought he had a fish in his hand:)
Fastening up that life jacket, yep, an excellent idea!

Good for him. I love my kayak. Especially when the water is running down the draws and dry creeks and I can just glide along with little to no paddling.

Great post, Chance! You didn't seem thrilled about the kayaks...with riding in one or watching them leave!

Chance looked very nervous in the kayak! What an adventure--especially for Far Guy!! ;)

Chance looks so funny trying to be little on 'daddy's' lap. Looks like a great time on the water.

I laughed out about Chance referring to it as the banana boat!

Great pictures. I just know far Guy loved you sharing his misery with us, but I appreciated it. This reminds me so much of being at my sister's lake on her pontoon. She tried to get me in a kayak last summer, but I am the world's worst clutz so I couldn't do it. It does look peaceful though.

A kayak is something I've always wanted to try.......but without a dog hanging on for dear life I think;)

What a fun day. You tell the story well.

I am laughing so hard at the body retrieval comment. Uh, Far Guy doesn't seem to be too amused!

I agree - - - floaties or a life jacket for your Chance. Next time Far Guy flips, he might think you can rescue him and he could pull you under water! Seems like there should be a flat board or something for a seat for you. It would make riding easier.

Oh, I've always wanted to try a kayak. Can I go with you sometime?

LOL - Far Side is so romantic! I'd love to have a kayak too. It looks fun.

Hey looks like fun! Just wanted to ask if you ever sell copies of your pics. Loved the one of the black eyed susans....It's just bright and cheerful and would be fun to have. Thanks for your great posts and let me know when you have time. Thanks Mary megwa1@sbcglobal.net