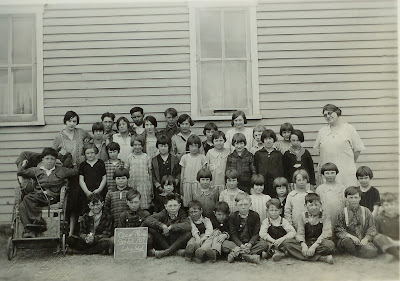 This is a Osage Minn School 1927, Entire School photo, just like it says on the small chalkboard. Far Guys Dad ( age 13) is in the back row, far left, he is the shortest boy with the wavy hair. I suspect that his younger brother ( age 9) is in the front row, the little kid with the curly hair, sitting on the ground in the front row, far left, with what I perceive to be a black and red plaid coat. His other brother would have been just six, and I am not sure if he attended school that year ..I cannot for the life of me pick him out in this photo.

This is the first photo that I have restored that has a mark on it, in the lower left hand corner right under the wheel chair it reads Old Masters Studio, Fargo , N D I found that interesting. Someone from Fargo apparently was making the rounds taking photographs...it must have been pretty exciting for these kids!

Here is a glimpse into 1927. Calvin Coolidge was President. Powdered Kool Aid was invented by a man from Nebraska. Charles Lindbergh flew the first Trans Atlantic flight from New York City to Paris. In Britain 1,000 people a week die from an influenza outbreak. A new car was $495.00 this was the last year that Ford made the Model T. A loaf of bread was 9 cents a loaf, I imagine only big city people bought bread. A gallon of gas was 12 cents a gallon. A gallon of milk was 56 cents a gallon. No wonder everyone that could have one, had a cow!! The average annual income was $2,400.00

The handicapped child was obviously main streamed into the school, there were only two teachers. I wonder if he lived near the school...or if he was loaded into an old horse drawn wagon to get to school:)
If you click on the photo, it will enlarge for you!
Posted by Far Side of Fifty at 10:33 AM

I like the 'entire school' sign, and all of the little girls' identical pageboy haircuts-what a neat picture!

I love old pictures thanks

Connie, When I see your post come up on blog reader, I can't click fast enough. I love these posts about these old photos!!! I love all the history you shared and one other thing I notice: many of the girls (standing) have their chins tucked down - I wonder why? Had you noticed that?

Mildred, No I had not noticed that, Thanks for pointing it out. The photographer must have posed them for the photo, perhaps it was his suggestion. Although that one gal in the back row is really sticking out her chin! I have so much fun looking at the clothing..these were mainly farm kids:)

I have never seen so many frowning and squinting faces! They must be facing into the sun. Great photo, great clothes.
I know they worked hard to survive, but still I think those were the "good old days".

I love those old school photos.....they all look so serious don't they?? They never smiled for snapshots then at all in any of the ones I've seen.
Thanks I loved this Connie :)

Dad lived two miles from the school and yes he walked it everyday. There was no transportation in those day. I recall him telling me in the winter he was able to walk on top of the snow piles the plow had made and hang onto the telephone wires.

Those kids look so much more serious than today's kids. I think they had a hard life. And those haircuts!!! Thanks for sharing.

Fascinating. Only one or two kids are actually smiling - all the rest are frowning? Must be the first time they've seen a camera perhaps?

nice job on the photo restoration

I haven't even begun to consider that craft. We've got lots of old photos that need it too.

I love this photo. It says so much, like small town people weren't so backwards as to not let a child in a wheelchair attend school. Young people I am sure would be amazed and think that you photoshopped him in somehow because people were so backwards and narrow minded then, especially in the midwest of all places.