Inside the Bluebird Box

You know you are getting old, when you watch birds every morning, afternoon and evening.

Far Guy and I have two pairs of Bluebirds, one set near the house and another set along the driveway. We watch for them everyday. I know where to look, I know where the male loves to roost to defend his area. He is not bothered by our activity in the yard, or Chance playing ball. In fact he seems to watch the crazy dog sometimes. Bluebirds are gentle little souls, they aren't flighty like the Goldfinches, they aren't pushy like the Blue Jays. They seem very task orientated, and non social, everything they do is for the nest and the babies. Seems to me that there are some human parents that could take a lesson from the Bluebirds. 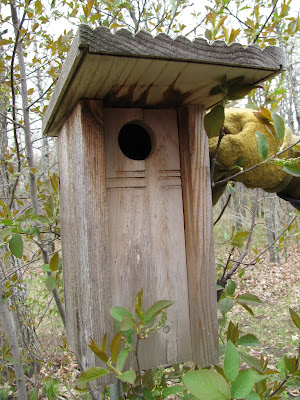 Far Guy was concerned one day, he said "I think there is a problem with the nest." He thought there were babies, and now they were gone..so it would be time to clean out the nest. They have been here since early April, so this was a possibility. I took my camera and we investigated. Far Guy wore gloves, even though they have a really poor sense of smell, and will not abandon a nest box if you open it. 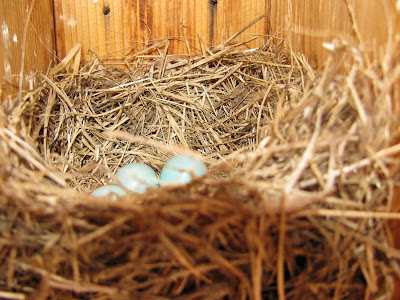 We opened the nesting box, there were eggs! Once we saw the eggs we made our investigation so quick that we didn't count the eggs..but we think there were three. I think they hatched on Thursday, that evening was the first time I saw the male with worms dangling from his beak on his roost in the Oaks.

Did you know that only the female Bluebird has a brood patch? It is a bare patch of abdominal skin..which makes her the nest sitter. It also makes her mate the nest watcher, and watch he does.. I have only seen them on their branch together a few times...I would like to get a photo of them together. Of course I would also like to get a photo of the baby Bluebirds fledging from the nest too...once they have fledged and the nest is empty, the box should be cleaned out, they may use it again to build another nest and raise another batch. It seems heartless to remove the empty nest, but all the "experts" say that you should. So I guess we will..unless she lays more eggs again before we get it cleaned out. 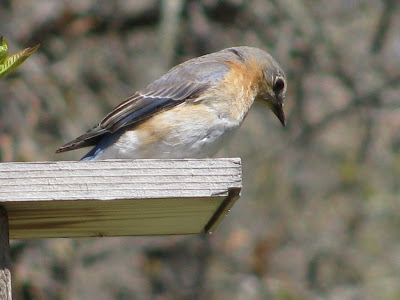 Female Bluebird, resting on top of the nesting box.
I am not sure how many of you are following the Live Loon Cam here in Minnesota, but this is the week! Larry thinks that the eggs will hatch sometime between Tuesday and Thursday. It is really something to see! The link is to the left on my page:)
Posted by Far Side of Fifty at 5:51 AM

We have eggs too - and the wind blew open the door. i scared the mom when i shut the door, so hope all ok. haven't dared to walk out there to check again. i see the male up on the power line watching alot. you were up early this am! jo

This was lovely. Hubby and I must be getting old too. We sit and watch our little friends. We have several pairs of cardinals nearby and of course our hummers. It sometimes more like watching a boxing match with the hummers and their territorial fighting.

Prtty photos today! We love watching the birds too. We have Chickadees and Cardinals closeby.

oh how cool! two years ago someone put up a bunch of bluebird boxes in the park by our house, and now the place is full of goldfinches and bluebirds. but i've never had a peek inside until now. thank you for that.

You know your are getting old when your realize it is time to really appreciate the things going on around you.

Oh thank you very much for sharing your bluebirds with us. It is all so very fascinating. Getting old has its advantages for sure.

How fabulous! I have never seen bluebirds here (just bluejays). They look so sweet.
Oh, and getting old? We are right there with ya, because we watch the birds as we eat at our dining room table every meal and comment on them as we dine! ha

I think Bluebirds are my favourite little birds..
I have nesting boxes everywhere, and this will be the fourth year they have returned and hatched their young.
They remind me of the English Robin, a sweet little fat bird, with a personality similar to a Bluebird.

Bluebirds - with eggs!! How magical! And they bring happiness too, right?

there are bluebird houses set out in the countryside -- and I know that some of them get used. The bluebirds never venture into town.

They have such a sweet gentle call.

Fun. We've never had occupants in our bluebird houses :-(

I have ALWAYS wanted to put up bluebird boxes but have been fearful to do so because of our cats!

So thank you for this peak into the nest!
Linda
http://coloradofarmlife.wordpress.com/

Wonderful! Now I know what a proper bluebird box looks like. Maybe we can get the Duke to make one. I don't even know if we have bluebirds here. I know we have two kinds of bluejays and they are not nice!

A robin and a sparrow, respectively, have built nests on the posts of our front porch. It's a joy to watch Mama Robin tirelessly flying to and fro, feeding the constantly hungry babies. I was startled to see what messy nests sparrows make -- all kinds of trash -- feathers, string, even some nylon tarp fabric -- woven in, hanging down the front post.