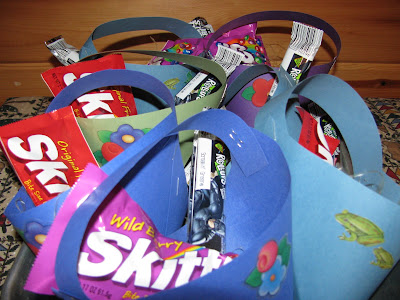 Chance and I made the May Basket deliveries late in the afternoon. Earlier in the day, we took our prototype design filled with appropriate doggie treats to Hooch..he was off on some adventure..so he wasn't home. We did hear that he enjoyed the treats..funny how he knew it was from Chance!

The first two girls, were very shy..but at least the one small child no longer screams the minute she sees me. From the time she was a baby, she took one look at me and pitched a fit..one time her Mama even hugged me whilst holding the screaming urchin..she still eyes me very warily...but she actually said hello, and told me she cut her own hair! It was very cute..but shorter. The smallest with the fat cheeks just smiled!

The second group were all smiles, and I got hugs. They were out playing in the yard with their puppy, so Chance got to play.. they have a Beagle..Chance thinks that Beagles bark funny. Earlier in the day they had walked by and paused by our drive and said Hi to Chance..where the small children told their Dad "Let's stop back here on the way back and get suckers! " Most small children leave my house with a Tootsie Pop sucker for the trip home...I have a special jar and everything!

The third group was off on a adventure on a four wheeler with their Grandpa ( my brother) so I got a phone call.. "I got a basket..thank you! " " I was on a four wheeler ride.. Thank you!" Their little sister is too little to talk on the phone yet.

These children are way too little to get the May Basket concept yet, but it is all about making the memory. Someday fifty years from now, they may remember the crazy great aunt with the baskets on the first day of May.. they remember the suckers in my jar...a few more May Days and I will have made an lasting impression just like my Tootsie Pop suckers in the jar. In some areas, where spring flowers are blooming, these often take the place of my candy in a basket, since May Baskets are such a forgotten tradition..you can make up your own rules...and put in whatever you care to share.

A few readers have mentioned May Poles..I have a very vivid memory of a wedding one year on the First of May at a Catholic Church..there were little girls dressed in beautiful different colored dresses, they each held a matching colored streamer that was attached to the top of a pole, the music played and they danced around the pole..it was a beautiful sight. I was maybe seven or eight at the time..I have only ever seen it that one time.

Next year if I still have most of my marbles..I can tell you all how to make cute little May Baskets..so you can make some memories of your own..or inspire some new ones:)
Posted by Far Side of Fifty at 7:27 AM

Labels: Fun stuff with kids, Making memories, May Baskets, Next year I will remind you sooner if I still have all my marbles

What fun to hear about you and Chance delivering the May baskets. I love that you are famous for giving out Tootsie Pops too. From my childhood, I remember a neighbor who always gave out peppermint sticks when you visited. Our little town had a Dr. who always gave us Juicy Fruit gum too. I love that you are planting precious memories for these little ones! Enjoy your day.

The May Baskets sound so much fun!
I know the children will remember you and Chance delivering them.
I suppose I would qualify for the old lady May baskets. Maybe next year you could head south with one?? lol..
Have a great weekend.
Pam

I just love all your ideas... the May Day baskets, the tootsie pops. If we had neighbors, I would love to do something like that. But alas, no kids out here that I know of!

Now the May pole I remember, just not the baskets. I wonder why we never adopted this charming custom?

I remember the May Pole thingy from when I was in about the 4th grade at school, but I've never heard about the baskets. That sounds like a much better idea than getting tangled up in the paper streamers which I remember vividly:)

What a radically cool idea! So how do you pick the kids you take them to?

The May Baskets sound so much fun..I'm sure these kids will fondly remember this and your kind gesture..
Julia ♥

Hi!
That sounds like an awesome idea!! Sounds like everyone enjoyed their goodies! Thanks for stopping by my place. Have a great evening!

It sounds like YOU had a lot of fun! It's funny how when we give, we are the one's that are blessed.

I love May Baskets! Wish I got one. :( I used to love giving them, maybe I should do it again. :)

I got Karmyn's book today. I always love your little notes! :)

Sounds like a great idea! And if you don't have your marbles next year, we can always make you a May basket with some new ones inside!

In Sweden, we dance around the maypole in June when we celebrate Midsummer's Eve.

May baskets are SO much fun... I can remember rining the door bell and running like a madmad to hide behind the tree in the yard! glad you had a good time..

Thought I would pop over, I havent seen you for a while. Wanted to make sure you were alive and well!!

What a great idea!