Yesterday we ventured to the "big city." We took Chance, the weather wasn't as warm as the day before when we hit 90 degrees and summer arrived..what happened to spring anyway? We tag team the dog when the weather is warm, no sitting in the car unaccompanied. If he is along, who ever is on duty, gets warm in the car too or takes him for a walk. It is good for a country dog, to hear traffic noises and the sounds of the city. We can also work on his leash skills. Far Guy took his turn while I was in the Clinic, I seem unable to leave my Doctor of 14 years behind, and since I am not a sickly person, it works. I had my annual check up, my blood pressure was perfect ( 122/78 for those who care. ) I should live to be a really old lady..so I should increase my Vitamin D and Calcium.

I took my turn with Chance while Far Guy visited a friend in the hospital. We walked around the perimeter of the medical facility. I watched Chance watching people. The first fellow we encountered was a security guard, complete with weapon.. he smiled at Chance and Chance wagged his tail. Way to go Chance..be friendly to people with guns. Some women passed by and Chance just looked at them. A woman with a stroller caused some serious tail wagging. Then we went and stood near the entrance where traffic was whizzing by, where we watched one of the gardeners weeding. Then Chance really perked up, his tail was wagging ninety miles an hour, obviously he could hear something that I could not, a gentleman emerged from the lower level parking ramp, he was walking with the aid of a cane, he paid no attention to Chance or me and kept shuffling along. Chance was visibly disappointed that the gentleman didn't stop to visit. Soon after that Far Guy emerged, one low whistle brought the dog into another tail wagging frenzy! I found it very revealing to watch the dog watch people. He likes smiling men better than women, women with small children and old men with canes. I wonder how much of this is just his nature, versus nurture. He spent the first eight weeks of his life on a farm with oodles of small children. He spent a number of years visiting the Nursing Home regularly. We have several people we know who use their canes as baseball bats to hit him some ground balls. We have children in the neighborhood that love to visit Chance...some have arrived in strollers, over the years.

Chance has only tried to kidnap one of the nearly five year olds in the neighborhood so far this spring. I was visiting, and Chance went home by himself..but Jordan followed him. Luckily the small child knocked on the window, much to Far Guys surprise.. he knew immediately that the dog was up to his kidnapping shenanigans again. The trio came walking down the road, just as we were leaving to find them. The child was scolded, it was too late to scold the dog...he had his innocent "I just went home, I can't help being irresistible look." Nice try Chance :) 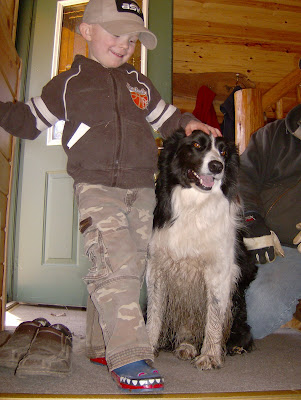 A very happy, but dirty Chance with just one of the neighborhood children.

Labels: no we are not getting him his very own child, watching chance watch people, yes Chance is a kidnapper

What a really nice dog! All of you are so lucky to have each other.

Border collies are so intelligent. I am always amazed at their ability to be so insightful and understanding of us stupid humans. They are great dogs with children. I think it has something to do with the high activity levels in both them. Loved this post. RAE

Chance is such a pretty dog, I can't imagine anyone not smiling at him. Our Border Collies perfer Dirt over me, most of our dogs do, but his oldest female will actually get in between he and I.

What an interesting post today. Chance is a real beauty; I can't imagine anyone ignoring him but who knows what's up with people?? My 33 yr. old niece rescued a border collie mix- he was so scared of everyone in the beginning but loves us all now. Like Chance, Maddox prefers men also. I bet it was interesting seeing Chance in a different atmosphere. That's an adorable photo of Chance with his little friend! Have a great weekend.

Chance is beautiful and looks very proud of himself.

What a good boy Chance is! I love his look and the wonderful black and white coat. He seems like the sweetest dog ever! Our Obie is like that too...loves everyone! Thanks for your comment regarding Obie. He is doing ok right now. It will take a while to get used to this new adventure in his life. He definitely did NOT even feel the needle this morning....that's good! Give Chancey a hug from Maine and I think he and Obie would have been great friends if they lived closer!

Chance is such a good dog. Glad your checkup went well.

I would follow Chance home any day of the week!
He's a charmer :)

What a great dog! I love watching them watch people...I'm convinced they see something we don't. :)