Adam broke his elbow last week, he got to have a blue cast. He was jumping on the trampoline and landed wrong. Luckily he did not require surgery. He was still feeling some pain last weekend when they were here. He was quiet..well quieter than normal. He has to have the cast for four weeks. My arm has been having sympathy pain for him all week...casts are just miserable. They are heavy, they are itchy, they are hot. 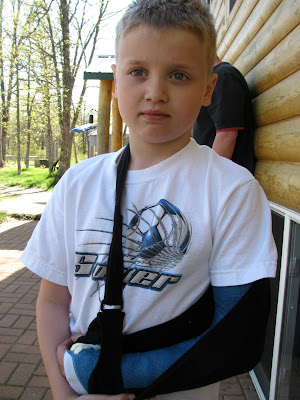 Adam, our youngest grandson.
I have had my share of casts, no fun. The last time I had a cast was in 1989 ( knock on wood), I stepped off a step and I broke the fifth metatarsal in my left foot, I went to the Doctor and they x-rayed and casted me....it hurt like heck. It was early spring, I got out my ever faithful crutches and hobbled along, I was not supposed to bear any weight on it. Fine, I am an old hand at this, I can clean cabins on crutches and scrub floors on my butt, I can even drive since it is my left foot. ( Sometime I may tell you about the time I had my right leg in a cast..and tried to drive. LOL) I have had many casts..I am a klutz. The one thing I missed was the ability to get places fast, so I became a pro on the lawn mower, and it worked just fine as long as I remembered to put in some gas, and take my crutches along. 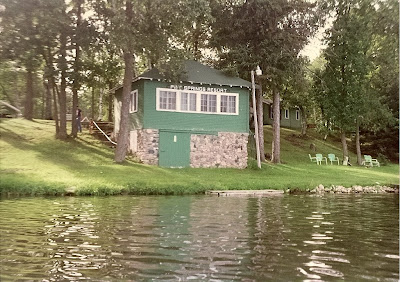 Resort 1989
One afternoon after school I needed to go down to the docks to mow the lawn, I told our then teenage daughters where I was going. Of course the four Shelties followed me, they followed me everywhere. Wouldn't you know it, I forgot my crutches, at the house, on the sidewalk.. I mowed for awhile .. I ran out of gas. I just sat there on the mower, no boats are on the lake, no neighbors are out in their paddle boats or on their docks, it is quiet. I holler for the girls, which just makes the Shelties bark. HELP! TRICA! JENNIFER! ANYBODY! No one is hearing me. I hop to the dock on my one good foot, laid down to rest, and mull over my options, the dogs and I could paddle around the lake in a boat, I could just wait for Far Guy to come home from work, I could wait for a neighbor to come along, I could wait for my children to miss me.. I had a nap. Sometimes I do that when I get all stressed out, some people pace and fret.. ( I couldn't have paced anyway, I suppose I could have hopped while fretting. ) I had a nice nap, when I woke up I tried encouraging the dogs to get help, they were worthless, they just licked my face and whined. I hollered again for help and the dogs barked. I thought briefly about hopping on one foot up that steep hill, and then down the other side to the house... but I am a klutz. I thought about crawling home on my hands and knees.. I decided to just wait for a bit. . the girls should be getting hungry, they know their Father will be home soon, they should be noticing that I am not cooking anything. Supper is at 6 :15 to 6 :20 every night, there are no excuses to be absent, it is the only time of the day we are all together as a family. Well Far Guy finally came home, the dogs take off barking, he notices my crutches on the sidewalk, he asked the girls where I went.."OH to the docks a long time ago, funny shes not back by now, she should be cooking supper." Far Guy rescued me, he brought me my crutches and then some gas. A few weeks later I decided I had enough of that miserable cast, so I climbed into the bathtub filled with warm water and proceeded to cut the thing off with a scissors.. Far Guy had to come to my rescue that time too..except with a pair of side cutters and a tin snips. The Doctor probably never would have noticed either, except I got a really bad case of poison ivy from my dogs, and had to go into his office.. He said "Where's your cast?" UMMM.. in the garbage. My fifth metatarsal healed just perfectly too..the x-rays confirmed it:)

Adam, too, is a fine looking young man. I hope his pain is better this weekend.
I love your story. I know it was not funny then, but it sure makes me smile now...especially the part about your daughters thinking that you should be back to prepare supper!

wow, gues the tyke takes after ya, huh?

this was a good read,
thanks for sharing. :-)

Poor sweet Adam. I hope he milks this Grandma style (refering of course to your tonsilectomy story).

Though I have never broken a limb that could be cast, I most certainly have been in predicaments where I wondered why we don't use the bucket of walkie talkies we have. Dirt always uses them in the most unusual and oft embarrassing applications but we never think to stick them in our pockets in the morning for around the farm.

Just shaking my head, and LOL, over the cast situation at the cabin.

I hope Adam don't try removing his cast! I'm sure he will be tempted when it gets hot outside.

What an amazing story. Hilarious...

You have a handsome young grandson. I hope he isn't in a lot of pain anymore. Your picture of the boathouse makes me homesick for Minnesota. Will be in the cities in a week or two for a couple of days. My right ankle aches every time I see anybody in a cast.

Funny that you took a nap while waiting. What better thing to do right. Thank goodness Far Guy came to your rescue. I also slipped with my left foot under me. I also broke a middle toe up on the top of my foot. I wore one cast for seems like a week and had to be recast after the swelling went down. I wore the second for 4 weeks. Thank goodness it wasn't summer time. Have a nice weekend.

Poor Adam! I hope it's not terribly painful, although I imagine it is. He looks very much like his older brother. Both are handsome young men. This was a great story, as usual! Thanks!

I think there are probably more injuries due to trampolines!

Your story was humorous (now, but not then!)

Haha - I laughed out loud at your daughters remark about making supper - so typical.

you are a great story teller. I envy that talent.

You're hilarious! I've only suffered through one cast and if I'd have read this then I'd have had a bath with tin snips too.

LOL..love the story. wanted to stop by and thank you for the Internet Explorer info. Martha had dropped me a note about the same thing. think i'll try Firefox if i can get to it via IE...lol love your journal. will add you to my following! kbear of kbear's heart 2..not on my computer at the moment.

If this cast is on longer than Grandma thinks it should maybe she could help to remove it. Only Kidding. You sure do some funny antics. Lilly

What a great storyteller you are and your grandson, Adam, is a good looking young man. I love your cabin and it's surroundings...looks so peaceful.

BTW, thanks for stopping by my blog and have a great safe weekend.