2006 Photo
I hate to go to town this time of year. I can't make it through the grocery store without someone stopping me to voice their opinion. "I sure miss your greenhouse, are you opening this year?" NO, I am sorry." You aren't open this year either..when will you reopen?" DUH? Never... comes to mind. "I can't believe you closed, he looks fine, when is he done with Chemo?" Yes, my husband looks just fine, there is no Chemo involved with Trigeminal Neuralgia ( just unrelenting pain and medications). He shaves his face and head..he was tired of just being partially bald. "No one grows plants like you, and they don't have the plants you used to grow either." Sorry. One old lady just burst into tears. GEEEs LOUISE.
During greenhouse season..I might have to don a disguise.. a dress..sunglasses and a scarf should work.
Last year was the end of nine years in the greenhouse business for us. In 1998 Far Guy was retired from the Military for a little itty bitty stress related heart attack that he had back in 1995. We didn't know what we would do next. Obviously I could no longer languish around getting my degree in Horticulture anymore..I still miss NDSU, the students and the instructors. I got a job as a grower out in Idaho, chains in, chains out, near a little town called Bonner's Ferry. On our way back to North Dakota to put things in order, Far Guy said " I am not sure if I can live that far away from home..couldn't you grow some stuff in Minnesota?" After much prayer and thought, and input from our children "The grand kids will only know you as the airport grandma." We broke ground here among the Oaks on a piece of property that my parents had given me as an inheritance. Far Guy and I made a deal..Minnesota in the summer..Florida in the winter. We would build a SMALL house in Minnesota. Yes!! I would get to sit on the beach part of the year! 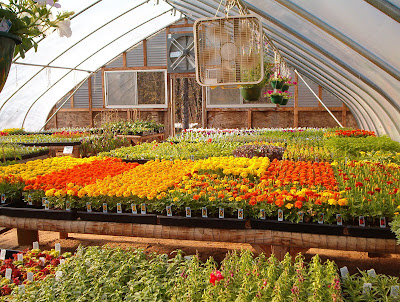 2005 Photo
The first year we cleared trees, built my "garage" and set up one greenhouse and lived in a Camper..not much fun in Minnesota in the winter..so we escaped to Florida during the worst of the winter. ( Far Guy was fairly miserable, but I had a really good time! ) We came back the end of February and I began to "grow" .. and Far Guy began to learn. I would not recommend to many women that they take their flower challenged military style husband and try to convert him into a vegetable grower..but I did..once he had the basics..he was a natural. So we were a team. A good team. We grew and grew, eventually to three greenhouses, that totally consumed our time every year from March through July. Most days were 14 to 16 hours long, with little time for sleep. We built up the business from scratch and developed a very loyal customer base. We built a house, a bigger house than I had envisioned... sadly we have not been back to Florida.
In December of 2007 Far Guy was diagnosed with Trigeminal Neuralgia, in early 2008, I made the decision to close the business. It was not an easy decision, Far Guys health was just a part of it. Greenhouse supplies had skyrocketed, fuel prices were outrageous, I did a cost analysis and a projection of how much I would have to raise the prices to survive and make a small profit. It was plain..it was time to throw in the hose, shut the doors and get on with life. Windmill Gardens 1999-2007 RIP :)

From the looks of the pictures, I'm sure your greenhouse is missed by many.

Your life sounds like ours.....it's been an adventure! I love the quote from Forrest Gump, "Life is like a box of chocolates, you never know what your gonna get."

Priorities and quality of life are important. The truth about the business costs and the dependence of those customers was probably a large drain. Life is what happens when you make plans. You had a good run with an admirable business now it is time for you and Far Guy. My prayers for you and your husband.

I think you may have blown your disguise by printing what to look for!!! I am sure your choice to close the business, something you both worked hard at and enjoyed, was a hard one. It's good that your repuation lives on but I can understand your reluctance to continue to hope people can understand an illness that doctors have a hard time explaining.
We are having rain, rain, rain. When the sun does come out, it's going to be a jungle here in GA! Best wishes to you and Far Guy for a good Monday.

Gee thanks for sharing that as I had no idea this was happening in your life. Shame on those people for still asking you about the greenhouse when your focus is on Far Guy and his health. Those gardens sounded like a huge undertaking of your time, your money and basically your life. I totally understand you stopping the business. It is nice to hear that you had quite a following though. Apparently you were very good at what you did and if pictures speak, I can see why! I hope things continue to get better for both of you. I will add you both to my morning prayers. Thanks for sharing that.

I just miss seeing you both! It has been hard not thinking about coming to stay at home for a little while, but can't leave the doctor. You know how that is. Tell Gene Hi!!!

Love you both lots.
Jessica

Sounds like you had a great run in a satisfying (yet time-consuming business), but things change, don't they...we're on our own crazy path, it's full of surprises too (some good, some bad). Don't wear the disguise, just be proud you did a fantastic job as long as you possibly could (because those plants do look great)!

Oh, you still have a dress hanging in the closet? Looking at the greenhouse pictures though I can understand why your customers miss you. Wow!! If I lived around there I would miss your plants too, although I'm pretty sure I wouldn't burst into tears:)) Maybe.

Looks like a blooming great enterprise! Florida is still there b.t.w. ;)

I'm always sad to see a small business close but can understand the reasons. The flowers look so lovely. My husband keeps promising to build me a greenhouse (but 1/10th the size of yours!)

I admire your courage to try and do your business and your courage not to. You tell that hubby that a promise is a promise and he needs to still get you to Florida at least for 2 months a year!!!
LOL

As I started to read this I smiled, the wonderful small business, the hopes, the dreams, and as I finished I was kind of sad. And then, I read the wonderful caring comments that other bloggers were writing, and I realized that life is never what we dream it will be, it just is what it is.

Difficult as your choice was, you have made what is right for you. And we would never have met through blogging if you were still in the greenhouses, beautiful as they are.

Lovely photos of your wonderful greenhouse. Changes in life is what makes it interesting...Jen summed it up nicely. Thanks for sharing a little piece of your past with us. :)

Oh, my. Since I stopped by for the first time last week and read several posts which I assume feature memories and old family photos of the area you're currently in, I just thought you'd been born there, married a local boy, and never left. How wrong! This is quite a saga. Reminds me of that quote along the lines of 'you can never be too kind to those you meet because you never know what burdens they bear.' (That's not exactly it, just the gist.) I can only echo everyone else: thanks, awe, and sympathy to Far Guy. I hope you get to Florida sometime. *debbi*

*debbie* I was born here, met Far Guy in High School, married, he was drafted, we spent many years away. Right now we live just two miles from where I grew up on a farm..thanks for reading!

Thanks everyone for your comments.. :)
I especially liked Jens sentiment it was so well said.. life is never what we dream it will be, it just is what it is.

I agree with Jen! We've got to make the most of what we have.

I help manage an online support community for people affected with Trigeminal Neuralgia. If you have come across this site in search of support and kind words from others like you, stop by and say hello: http://www.livingwithtn.org

Looks like your gardening was a BIG success and I am sorry that you had to quit. Your faithful base of customers seem to have a big problem letting you go, but will soon learn. Keep up the good work in keeping your hubby as well as he can be.

I love the way you write, great blog! The tags you have for this one are insightful, "forks in the road." Exactly and then you move on. Come visit me over at GrannyMountain.
joy c.

I can see why your customers miss you. Love the 'throw in the hose' comment!

I wondered what the deal was when I read your fire post. I've toyed with the green house thing, the nursery thing, the market garden thing, for when I am done with my daughter raising gig thing. But then I also have a fantasy about having a T&B here, no typo, T&B not B&B, stands for Trailer and Breakfast. Sort of involves picking up some old funky travel trailers and gutting them. So many ideas, and the time is getting shorter for a decision. Love the pics of your business. Thanks for sharing them.