Years ago, Far Guys Dad established a tradition. In the winter, Far Guys Dad would get out the puzzles. The old card table was resurrected out of the front closet to take it's place in the living room. It became an adventure, ever changing with new conquests, as the years went by the dog ate a few puzzle pieces, the grand girls escaped with a few. Far Guys Dad always said "All the pieces aren't there anyway." or "I have been searching for that one piece all week." Winter weekends, were always the same, there were always missing pieces..usually found. Puzzles were just part of the card table history, it was the card table that was set up for a night of card playing, it was the little kids table at Christmas, Thanksgiving and Easter. It had history!


In 1994, when Far Guys parents sold their home and moved into a Senior Citizen apartments complex to escape the snow removal and yard mowing problems that were becoming more difficult for them, they had an Auction Sale. I had a list, of all the treasures that we wanted to purchase. Some of the items we were able to reclaim, the old red couch, the one that Far Guy's Dad had picked out because it was extra long and he could stretch out and nap there..and it was red, his favorite color. Far Guy's Mom had a set of China, it was purchased and given to our youngest daughter. Many treasures were sold that day, we couldn't possibly purchase them all. Some went to neighbors, some to old friends, some to relatives. Some things went to strangers. That happens at auctions. One thing that we did not get that day in 1994, was the old card table. My Uncle purchased it, he had a great appreciation for wood inlaid items, it had a good home.


Then the unimaginable happened, my Uncle died, on his birthday of all days. I don't often quarrel with God, and there have been only two people in my entire life that I would have gone "toe to toe" with God for. My Uncle was one of those men. I learned more from him about laughter and life than I have from people I am actually blood related to. He was married to my Dad's sister. She has now moved into a retirement apartment. Yesterday was the Auction Sale. I had another one of my lists. Far Guy had a list. I made one special purchase that brought tears to my eyes..more about that some other day. 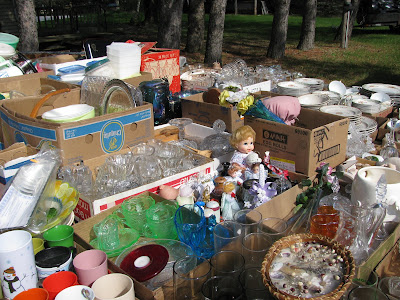 It was a really hard day, to see all the earthly treasures of someone who collected many things throughout their life on hay wagons and trailers..sold to the highest bidder. Each item with a story. This auction should have been a two day sale, but it was all crammed into one day. There were ten wagons of "stuff." We arrived at 9:30 AM, we came home twice, once to get Chance and one time so that I could bring Far Guy and Chance back home. Far Guy was exhausted, the wind blew relentlessly most of the day. It was cold, it was miserable, especially after sunset. I went back to wait for one last item, it was dark when I made my final purchase ...a missing piece:) 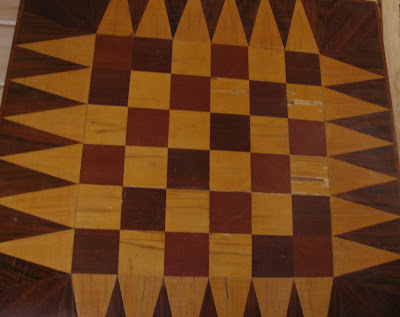 Labels: a card table, a family treasure came home, Far Guy will fix it all up

It wasn't hard for me to five up my mom's things to the nieces and nephews, I just wanted to be sure that they knew the stories behind them. I was able to keep a lot of those things but there are hundreds of things with stories that I tried to get told before they left the house. I am glad you got the card table. What a beauty.

So sorry to hear about your Uncle, but I'm glad yopu finally got the t.able

I hadn't realized the story behind the table. It really is a sad thing that all our stuff that we work hard for and enjoy ends up in boxes at auctions or garage sales. I'm glad you got back to bid on it. jo

I will be the first to admit to being emotional...... but still, Connie, that made me cry.

Sad, but touching, and while some people may say "it's just stuff", and I am trying so hard not to accumulate any more things, the photo was what got me in the heart. That and the beautifully written words of respect both for your Uncle, and his treasured table.

I am so glad that you waited until the end.

We go to a ton of auctions and estate sales. We are always wondering about the lives of the people who owned the things. The saddest thing I have seen is family photographs on auction...the really old ones from the 1800's. You would think someone in the families would want to keep them. If only the objects could talk!

I choked up while reading this. It reminded me of a very similar experience in our family. I'm glad the table found its way to your home.

This was a very wonderful story. Each of us have special memories that are understood only by us. One mommento can help us relive a whole flood of those memories. Sometimes it is strange the things we become sentimental about. I am guilty. I love my old treaures.

So sorry to hear about your uncle. This is a heart-warming post and tugs on my heartstrings. So happy that the table is "home" where you and your family appreciate its history and can make new memories.

What a wonderful story. So glad you got the table. I'm sorry about your uncle, he must have been a wonderful man.

Beautiful and emotional story. So so glad that much loved card table has ended up back in your home.

A wonderful tribute to your loving Uncle and the many treasures he and his wife collected.

I always try to think the household items at auction are purchased by loving people who will put their own stories to them as they are again passed down or sold at auctions years down the road.

My husband's family lovingly allowed their two grown and married children ...... and all the grandchildren also married with families to choose any and all items they wished as keepsakes......even down to the pots and pans, linens, furniture, etc. I am so very pleased to have in our possesion many fond items that tell their own stories. My kids (grown up) probably get tired of my telling them about this item or that.....where it came from and how. But they too, will REMEMBER!

Sentiments are a beautiful thing!

I'm so glad you got the table!
My Granpa had a red couch like that. I wonder what ever happened to it?

And the circle is closed....a lovely tribute to a card table and hours of family memories. Harriet

So, very sad. But I'm happy the table has found a happy home with you.

I sometimes have a HUGE lump in my throat when I go through an estate sale. It's the old photos (they're just trying to sell the frames!!!), diplomas and even things like sewing notions that really get to me.

Yes, it's very sad, but it taught me a lesson not to put too much value in possessions and hoard them. NO one will treasure them like yourself and all you leave is a "slime trail" of things.

I'm touched, too. One thing I don't understand is why family wasn't allowed to buy the things up front that they wanted. I'm baffled by the thought that you had to outbid a stranger for
family memorabilia.

It really seems to be a prairie kind of thing. My Aunt and Uncles in Alberta farming country have auctions when they move. No one on the coast does, I wonder why.

I have been following your blog for some time now, you have such a gift C, thank you for sharing your thoughts with all of us. Your photos are great, very interesting. Your children and grandchildren should indeed cherish all the work you have done. I look forward to catching up on your writing, wondering what's happening next in the neighborhood. I bet you are "spinning" this next winter...socks for Far Guy? How about a coat for Chance...that's all he needs...
Thank you again for sharing your family history with us. G and V. (Some of your older stories really, realy made me laugh...divorce in the neighborhood??? Pretty funny.)