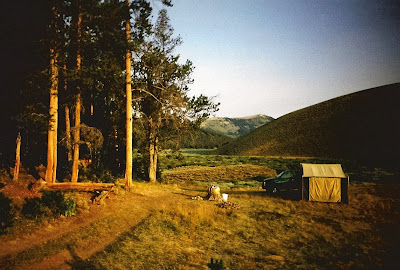 North Piney Creek, Wyoming August 1996
Far Guy challenged me to tell this story. He wants you all to know what a romantic guy he can be!
We had been camping in the wilds of Wyoming for about a week, when we came out of the wilderness, all I could think about was standing for hours in my brother's very warm shower ( He lived in Big Piney, WY) Cold streams and partially warmed water in a primitive shower bag only go so far. Far Guy said, how would you like to go out for a really good supper on the way back home? Fine.. I am game.
He headed south and then west...no where near the way home. We stopped in Kemmerer, Wyoming at the JCPenney Mother Store, it was a very interesting diversion, I bought a few more clean T shirts. I am somewhat of a impatient, bored traveller and like to stop often. Far Guy not so much, he has the destination in focus at all times. Well one thing led to another, I know how to distract him, a few little kisses strategically placed near his ear, found us at at some scenic overlook for a little kissy face. Finally after 193 miles we are in Ogden, Utah. Far Guy once went to a restaurant in Ogden, but he can't remember the name of it, or exactly where it was located. He has been so many places, to so many Air Force Bases..could he be confused? By this time..I am thinking MOTEL! Forget the food, a real bed and then another glorious shower ..then you could feed me some chips and a soda. I am an easy woman. Far Guy has a need, a need to take me to this place where he ate supper one time...always an eye on the destination. The desk clerk at the motel, says OH yes, that place, you are close, it is only a few blocks from here.
We found it, Far Guy is like a little kid, so excited to share! We walk in, it is really, really dark. Then I notice a boardwalk, and a campfire, and stars twinkling in the ceiling, I hear some rendition of an old cowboy song, the boardwalk leads to covered wagons, private little covered wagons, lit inside with lanterns. We order Steaks, and Salads..they bring us an entire loaf of freshly baked bread, and butter..real butter. They also have real Coke, not Pepsi, so far this place is getting rave reviews from me. The steaks were perfect, tin plates and all, it was romantic, we played a little footsie under the table..we laughed and talked, enjoyed the campfire ( lit by some flame type light) the wolves and coyotes howled in the distance, Far Guy serenaded me as he sang along with some of the cowboy music. It was a perfect choice for a really good supper. During our meal, I shared about how I always wanted to wade in The Great Salt Lake, I had viewed this lake before when I was a teenager, but my parents wouldn't stop for some wading.
You want to wade in the water.. OK.. Far Guy has a new destination in mind now, so after supper we drove out to Antelope Island, it was a long drive, the closer we got, the more we noticed a strange odor in the air. About the time we both said, "How do people put up with this horrid odor?" It got worse, gag a maggot worse, then worse than that..finally we are there, we are both holding our noses..Far Guy says we should have done this before supper..not after..I did get to stick my toes in the water, amongst the swarms of little flies..while holding my nose. Later I soaked my feet in the tub for a really long time.
After more than twenty years, I wondered if this place of covered wagons still exists, indeed it does, it is called The Prairie Schooner. I highly recommend it, it is one of our fondest memories, not only the meal, but as a reminder that Far Guy is a bit romantic and he will go out of his way to make some of my oddball wishes come true:)
Posted by Far Side of Fifty at 9:45 AM

Awe!!! Far guy IS a romantic man and it sounds like so are quite the romantic too! I had to laugh about how you both travel. My hubby is like yours and I am like you! I am easily distracted and get bored easily too. What a great trip and that Prairie Schooner is such a cool place. Isn't that great that you found out the name of it and could share it with us all! Nice blog and Far Guy sounds like a wonderful man...you are a very lucky woman.:)

You are so lucky to be married to such a romantic guy! Prairie Schooner is now on my bucket list!
joy c. at grannymountain

That's a great story. It's nice to relive memories. Thanks for following my blog. One day I'll have to blog about hubby and me camping and the day he lost his clothes.

Can Far Guy give my Fab Forty some lessons in romance? Or does that come after the nest is empty? ;o)

Love your blog! In my humble opinion, you met his challenge head on and it was a great success!

we will be driving thru Ogden this summer, we will have to stop. And Coke is way better than pepsi

I love Dr. Pepper! I remember the day we could buy it in Colorado! YEAH!

I remember a time when Terry was really excited to show me something he thought was just wonderful. I'm game (we were married for a short while) so off we went to the beginning of the tunnel which brings the canal water to our farm. (chuckle)

That restaurant sounds brilliant - what a creative idea!

What a wonderful memory to share. That is such a unique sounding place to share a great steak. I just wish I weren't so far from there!!! You two are really blessed to have found each other. Hope you are having a great afternoon.

Connie - what a sweet story. Far Guy is alright and what a romantic he is. The covered wagon dinner sounds so interesting and romantic.
Have a good evening. Becca

You two should write a romance novel! LOL! You almost had me blushing a few times.;D

Beautiful pictures!! I am on the early side of 50 just starting lol. Very nice blog.

Connie - what a sweet story. such a romantic he is!
Julia ♥

I just do what the voices tell her.

Very cute story!
When we travel now, we stop a lot more because we are retired. Half of the fun is the journey, not the destination.
I am with you, COKE is way better than Pepsi!

I need to learn how to enjoy the road -- instead of being in an all fired hurry to get to the destination (I came by this naturally from my father.)

I didn't realize the salt lake was so stinky.