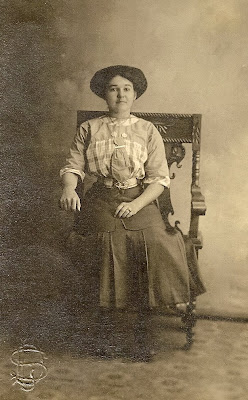 This is Meady's sister, Ethel. The photo is not dated so I guessed somewhere around 1910, although she would have been 18 years old in 1908..so that might be a more accurate date. I knew nothing about Ethel a few weeks ago. All these photos were packed away with Far Guys Mothers stuff. In a huge envelope marked...my family. It has been an adventure. Luckily most of the photos are marked with names..but not dates. I needed to know more about this woman with the incredibly tiny waist. I knew who she married, and that she had three children. Somehow this did not seem like enough. I needed a story or two.

A cousin said "It was the darndest thing, even after she had children, her waist was still small, she was just a tiny little thing."

Uncle Willard, who had a "spell" last Saturday can recall many old stories, he is 92 and doesn't hear well. He enjoyed the photographs, he looked at them through his magnifying glass, I wrote as he talked.
**********
Ethel, well she was a real fireball. Do you remember her son Hugh Robinson? He never knew enough to stay out of trouble. She had a dish towel all rolled up, she would wet it and let it dry, she used it just like a club when Hugh would come through her kitchen up to no good. Their screen door was like a bear-trap with two springs on it, that's the sound you heard..the screen door slamming shut behind Hugh running out of the kitchen. She was a tiny little woman, but she had a short fuse.

We took Alaska Guy( Far Guy's cousin) there once for supper when he was little, he was afraid of her, as Ethel was serving the food, he whined about something..Ethel just said, " That's what you get, if you like it or not."
****************
We have to go back with more photos soon... they live in a retirement community..and have a little white spoiled dog, the smell of fresh bread permeates their apartment. Far Guy hinted to his Aunt "You still baking bread? " She replied "Yes, your uncle won't eat any other kind of bread." No, she didn't hand out any freshly baked bread, but I got a couple of stories to go with an old photo :)
Posted by Far Side of Fifty at 11:10 AM

Before I started reading this post I had already envied Ethel's waistline! So good that you can still find out these interesting stories about your old photos. I wonder if some day, a relative will refer to me as a fireball!

I can't remember ever having that small of a waist. I do have some old photos of some family members. I know who they are but can't seem to put dates on them. Going back to the bread making I now resort to using the trusty bread machine. So have a receipe for bread that goes over quite well. Still not like that homemade bread that grandma made. Lilly

she does have a tiny waist, don't I wish mine was that tiny.

A tiny waist and glorious hair! Amazing... I just loved this story about her fiery temper...

She looks like she could keep a few in line, tiny waist or no.

I think my waist was that tiny once...when I was five! You do have to get more stories. It's a good thing you still have someone around who can share them with you.

get those stories while you can!