We have a new friend, she lives down the road at Hooch's house. She is eight weeks old. Her name is Odda 2, she is a Bernese Mountain Dog. Odda 1 died when she was just sixteen weeks old, she had a defective heart. ( It was very sad) This new pup was supposed to be called Bella..but everyone kept calling her Odda instead of Bella..so Odda 2 is her name! We have visited twice in a week, she has no manners..yet, and her little teeth are like razor blades. Hooch is teaching her some manners, he is a tough teacher, and made her cry yesterday. It sounded terrible, and Hooch was in big trouble... Hooch may be in for a big surprise when she gets bigger...and bigger she will be! Chance did really good with the new pup, of course she thought seeing someone the color of her Mother was pretty interesting. He just moved out of her way, when she got too "nosy."
All tails are up! Hooch, Chance and Odda 2
Chance and Odda 2 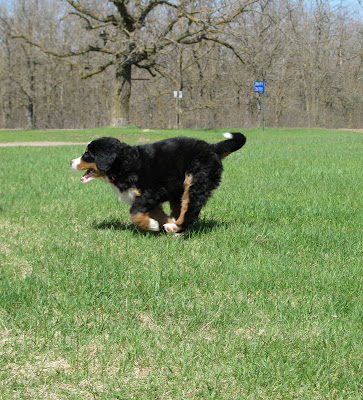 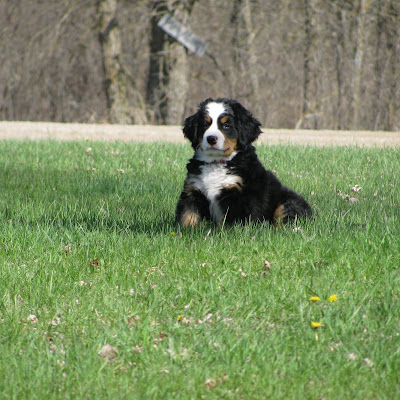 She is pretty cute!
I think it is wonderful that I can live vicariously through my neighbors new puppy, I can visit, and play, and go home. Kinda like being a Grandma! No whining at night, no accidents during potty training, no new puppy smells ( Gosh I love the smell of a new puppy.) Sometimes I would like to have my very own dog. Chance loves me, but he is devoted to Far Guy. They are best buddies, and sometimes it is down right nauseating the interaction between my husband and his best friend. The other evening I was busy with something, and they were having a "talk"..it went like this. "Well, buddy, I guess it is time to cook something for supper, you are getting hungry aren't you dude?" grr..grr.. "Nope, she doesn't cook anymore." grr.. grr.. "I guess thirty- five years of cooking almost every night burned her out, so now it is our turn" grr.. grr.. pathetic arn't they? :)

The dogs are so cute! Great story also

I love your version-now wouldn't you like to know what they are really thinking. I think dogs are much smarter than they are given credit for.

Oh I love those Mt Bernese!!!! I think I might have to have one for my next dog (years and years away, of course).

What a pretty puppy! I was noticing your trees are still bare but the sunshine and sky sure are pretty. Have a great weekend.

Those Bernese are beautiful dogs! So, since you like being a grandma, will you come visit Zack and Zanna?
They just need a little more love!!

The first year Gary and I were married, we decided to visit his parents for Thanksgiving. I asked him if his Mother wanted to fix a dinner. He said- Oh, it will be fine, she loves to cook. However she told me, she hates to cook, she said "I've been cooking for 75 years and I don't want to cook anymore" I don't like cooking that much either.

What a cute puppy! I love the picture with all the tails up. She is going to get quite large. I hope Chance doesn't fall in love - it would break my heart!!!

Great last picture of "little Odda" - soon to be large and in charge! They all love when Chance comes to visit. I really enjoyed your prom story and the 190 + miles for supper!

Had to laugh about the conversation Far Guy had with Chance!

So cute!
Wish they weren't pooping and chewing machines.ha
I see you are waiting your tree leaves like we are in the U.P. of Michigan!!
We had SNOW in the air today. Yuck!

What a darling puppy! A Chance is such a good neighbor to her, I'm sure he knows HE doesn't HAVE to share so he can 'just have fun'.

Sometimes I get tired of cooking also!