Hunting With My Camera

I used to hunt years ago. I hate killing animals, gutting them out, and cleaning them to cook them up. I was raised that if you hunt, you must eat what you hunt. Far Guy and I used to hunt all the time, we enjoyed being in the woods. Now that we live in the woods, we can go outside whenever the mood strikes us. We no longer need to use hunting as an excuse to be in the woods.

Hunting with a camera is much easier, there are no "hunting seasons" there is no license to buy. You can shoot and your photograph is the result. No guts, no feathers, no cooking..no fuss hunting. 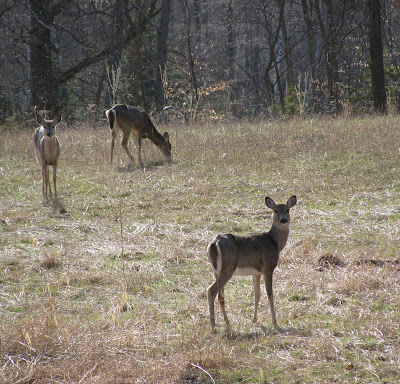 The deer, some look pretty healthy this year. We did see some the other day that looked pretty scrawny..but they were too quick for a photo.
I have never really liked Eagles, we have several in the area. When we lived on the lake, I watched one terrorize an iced in injured swan. I see them along the road in early spring pecking at road kill deer. I have watched them swoop and dive after loon chicks. I have seen them fishing. Eagles are not really very nice birds. One time they were taking up early spring residence in our yard, sitting high in a pine tree. Eyeing my dogs. Far Guy kept telling me, hardly anything eats a dog. The only time I have ever been impressed with an Eagle was when we watched a parent and two young eagles who were just learning to fly, ride the thermals high above our house, the parent squawked and talked encouragement the entire flight. 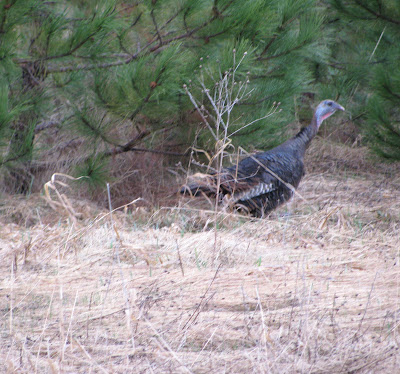 Turkeys would have been a much better national symbol in my opinion. They eat bugs, and grain. 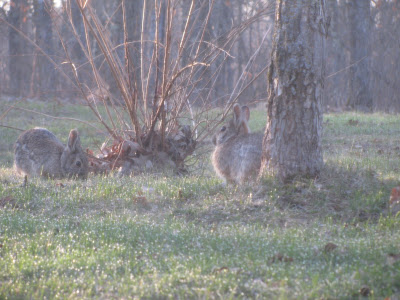 One morning, I hunted from the kitchen window, this was taken through the window and the screen. Bunnies! :)

Labels: Hunting with my camera, Minnesota Wildlife, no cooking, no fuss

I agree with you, it's much easier and more pleasant to hunt with a camera. We also see bunnies, deer and turkeys. I've never seen a blad eagle though. After watching my grandma wring a chicken's neck when I was a kid, I sure don't want to hunt and kill dinner!!

I am glad we didn't lose the Bald Eagle but I agree that some of their natural instincts are unpleasant. We have such a large number of them in easter Iowa along the river that they could be called a nuisance by some. Great photos!

Deer - and an eagle!! That's awesome! Brilliant shots, brilliant I tell ya! And so much nicer than hunting and killing...

Great shots! Wow, lucky you to have snapped all those. I do like the Bald Eagle picture. Yes, they are interesting birds and yes, they do go after innocent animals. Amazing they were almost extinct at one time. We have quite a batch around our area. They have been known to pick up small dogs and cats.

Well hello Connie, nice to meet you. The name of your blog caught my eye since I am indeed on the far side of fifty! ;-}

The pictures you took could have been taken in my backyard. We love looking into the woods to see what we can see. Although I haven't seen an eagle, the rest are very common. My husband is a hunter but not in our backyard ~ thank goodness.

I like what I see of your blog. Your mother looks precious and her comment reminded me of something my mom would say!

Great shots!
Come over and [play on my new Color Carnival photo meme :-)

Hunting with a camera is the best way! When the Duke goes hunting the Duchess always prays for the animals! So far her prayers have been answered :) Besides that, the Duchess can't cook worth a darn! The neighbors did share some Elk meat last winter and the Duchess figured out how to cook it and now declares that's the only animal she won't pray for!

How lucky you are to be able to hunct from your kitchen window...Wow

don't know what hunct is but I meant hunt....

Hi Connie,
We envy you getting such shots from the window.You must be living in a great place.Loved your post.

I didn't know eagles were so mean. We have had one flying over our place...I wonder if he's looking at my chickens or baby kittens?

Love the pictures. I used to hunt too, but gave it up a couple of years ago. It just makes me too sad to kill an animal. I do not begrudge hunters and understand why hunting is necessary, it's just not for me. I love the idea of hunting with your camera. Thanks for sharing!

looks like our back yard too :) G-d's creature are awesome.

You have some great photos here! WOW! Eagles are beautiful but mean. Real Mean.

I think the swan would have been a great USA Bird, they are beautiful, stately, and eat grain and bugs.

I just had a similar conversation with my hubby..when we headed out into the woods, I said, "Let's go photo hunting!" It was such fun not knowing what we would find!
Your photos were so neat, as usual!
I love seeing what you captured on film each day!

As someone who has lost livestock and poultry to bald eagles I completely agree with your sentiment about them. I don't trust them around our smaller dogs either and I am sure some of our cats that are missing went flying like our ducks. Not a good choice in my opinion for a national symbol. I like the idea of the turkey, somewhat clever but mostly very vocal, beautiful and can feed the world!