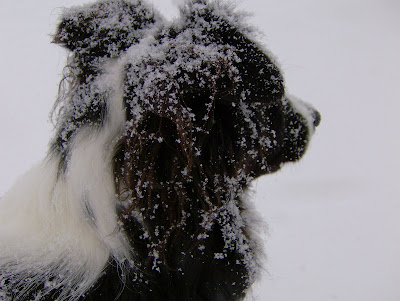 It snowed again, I was just thrilled. Old Man Winter is baaaack, and it was no Aprils Fools Joke either. I am reverting back to my cheerful frozen mood..Far Guy is so happy. No fooling..Chance and I were awakened in the middle of the night when the snow rumbled and fell off of the roof. Far Guy just snored away. Chance was concerned, I was fully awakened by his concern..in the form of of his big old nose.. 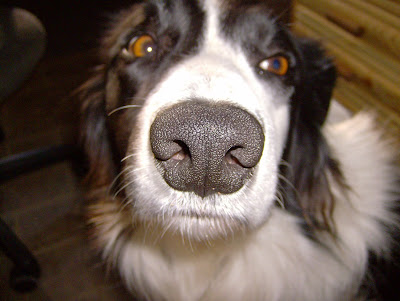 "NO, I DO NOT need to go out with you and check it out." It sounds worse than it actually is, the tin roof amplifies the sound indoors. "GO back to sleep." 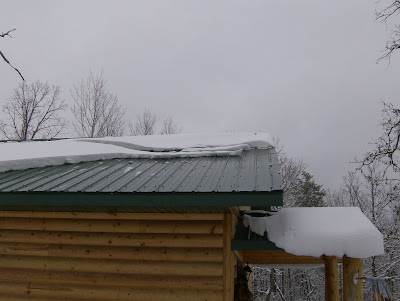 This is what the roof looked like in the morning..half snowy..half had fallen off. 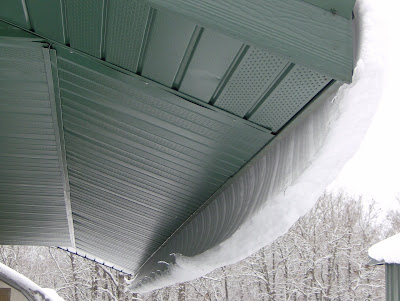 When the snow piles up and starts to slide, it forms curls. It only curls so far and then..WOOSH..it comes off in huge sheets..kinda like a huge snow bomb.. this is a curl on Far Guys garage. 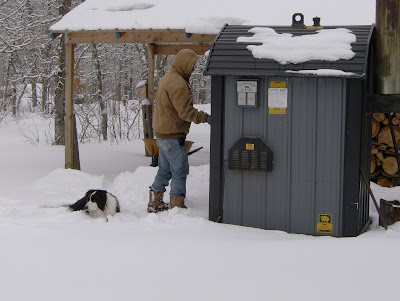 Since there is safety in numbers..we all go outside together, Far Guy to fix the fire in the Outdoor Wood Stove. Chance to keep watch..and me to take more glorious snow photos. Luckily I grabbed a pair of socks and hiked them up over my pants legs..cause I did get snow in my boots..that tells me we got about ten to twelve inches of the beautiful white crap. 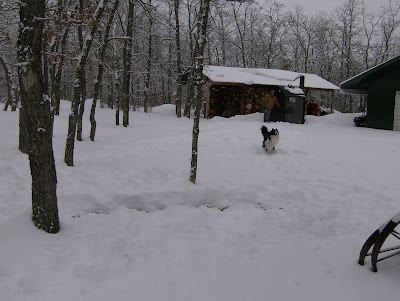 We played a game..called Chance Come! I am near the house in a snowbank, relaxing, as much as you can relax with your boots filling with snow, and Far Guy is by the wood stove..we take turns calling "Chance Come" ..back and forth he runs..burning off all his pent up energy:)

Labels: April Snow, Chance, Why in the world do I live here anyway

Haha. No I'm not laughing because you got all that snow, again!! I'm laughting because you're so darn funny!! Love Chance's nose pic!!

Looks like you're having fun but in April ... wow! This could happen here also (but hope not:)

Oh goodness! And I complain! I love your stories and your dog! And your home and oh...can I come visit you?

Wait! I forgot! I get to every day I visit your blog!

OMG I can't believe you are still getting snow! Woe! I thought Maine was bad....well you never know though...I may have spoken too soon. There's an old saying in Maine in fact and it is.... "don't like tha wetha!...just wait a minute! It was hard to spell the way our accent sounds.:) Hope it melts soon my friend.

What amazing pics Connie..
That snow coming off the roof...We never see this here..
I wish for some snow!
Julia ♥

It is good to see someone else with more white stuff than in my yard (but it is close)! I loved the photo with the dog's nose so close too...he looks like such a sweetie!
We have an outdoor wood stove too...I love it!!!

Our border collie would love that snow. He runs and rolls and always takes time to get a bite of snow here and there as he gets heated up from running so hard. Love the photos. BC's are special dogs.

Hey I'm glad your excited about your new dose of the "beautiful white crap." Isn't it amazing how loud that snow can be on the metal roof. Jumped right out of my skin the other day when ours was sliding off. But were back to good old rain again. Sure missed it.

Freezing at work all day today. And then I get home, and see your SNOW photos. I have nothing else to say on that subject.

Thanks for fulfilling my request for more Chance photos.

More snow! Oh no! Or oh yes! Personally, I want spring and sun and no snow in my boots.

Love the game you guys play with Chance!

Safety in numbers. That was cute!
Holy Wah eh? That's alot of snow you have there. Some April Fool's Mother Nature played on you guys. AT least you know it won't stay too long. Let's hope!
We got the rain part of your storm. Now we have inches of mud.

I love the picture of the snow sliding off the garage roof. The one good thing about snow this time of year is that it doesn't last long!

Yay, more Chance photos. He really does look worried in that photo, lol. My Trixie was all freaked out last weekend; we have a tin roof also, and the same thing happened but it was ice, not snow! Everytime it swooshed off the roof, Trixie about died!

If it woulda been colder outside during the daytime, I coulda stuck the food outside... but it was just too dang warm daytime, cold at night. What a dilemma. I think maybe we'll jump at the opportunity to buy a larger generator when we can...

wow, they look so beautiful!I never seen that much snow.