Since Far Guy and I discovered Sven and Sophie up on Swan Pond we became curious how many other Swan pairs are in our area. On Saturday after I was done bitching about the snow, we went for a drive. Once the snow melted I was in a fairly good mood. We made a sixty mile circle and it took us all afternoon. We had a wonderful late lunch/early supper and returned home six hours later with my camera cards full. I may need larger cards. 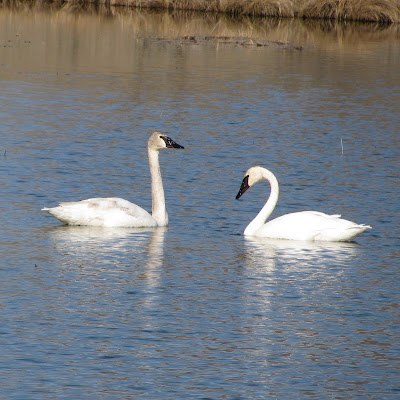 Back in the 1880's these Swans were hunted into extinction in Minnesota. For their meat and for their feathers for some ladies fancy hats. In the1930's, only 69 Swans remained in the lower 48 States. Those 69 Swans were all located in the Red Rocks Lake area of Montana. Through Conservation efforts and the Wildlife Nongame Wildlife Program these beautiful birds have been brought back to good numbers in Minnesota..exactly how many..in 2004 it was estimated at 2000. Success!! 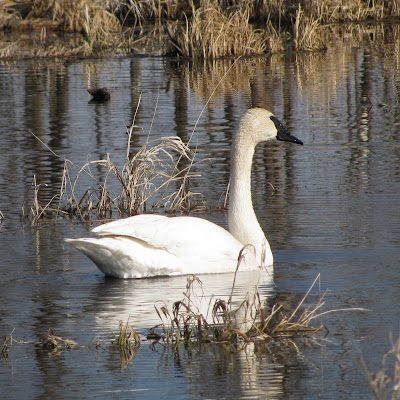 In 1987, 21 Swans were released in our area. We have discovered five pairs in our travels. Some are in potholes far from "Nowhere" ..some are in ponds very near the road. None of the Swans that we have viewed have identification neckbands..so I surmise that these are all wild swans versus released swans. 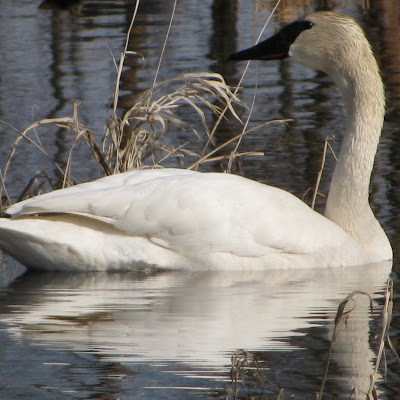 A Swan mainly eats submerged plants like water celery. I have noticed that one Swan..usually the largest..has a real dirty head. Now this is only my theory ...but it makes sense to me. Take the case of Sven..he is hard to photograph because he always has his head underwater. I am positive that Sophie tells him " Sven, you need to get me food cause I need to lay eggs soon. I will keep watch and you will rip plants out of the muck ALL day long for me to eat." Remember this is only my theory.. :) 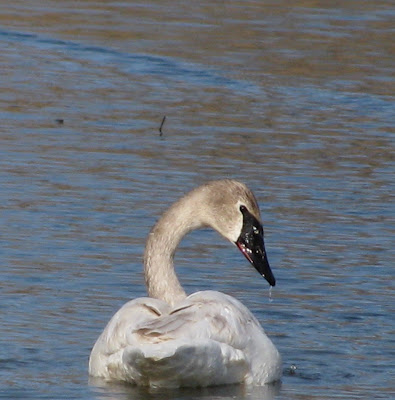 All photos taken with Canon PowerShot SX 110 IS
Posted by Far Side of Fifty at 10:47 AM

Good Afternoon Connie, I had no idea the swans numbers got so low. Amazing that you have found these to photograph. Your pictures are so pretty. I'm glad I don't have to duck my head under water to eat my Reece's peanut butter cups!!!
Sounds like you enjoyed getting out and driving around searching for the swans. Hope you both are feeling good.

Oh, those are the most beautiful birds! I didn't realize they were dissappearing! Thank you for showing them to us!

Great pictures, I love how you've caught the reflections in the water.
I enjoy watching for the swans when they flyover to go south for the winter, I've yet to see them in the spring.

Wonderful pictures - that new camera does a great job!

I didn't know they came near to extinction, either. Do you suppose swan tastes "just like chicken"?

I love success stories.
Great seeing the photos, too.

Great pictures. I just love swanning around, don't you?

I love all your shots of Sven and Sophie, and the background story about trumpeter swans is very interesting. I'm glad they were saved from extinction, such beautiful birds.