Finally, the carpet has been installed. The project that I wanted completed before Christmas is completed by Easter. It was quite a project, we carted "Stuff" into the bathroom until we were exhausted. There was a method to our madness, whatever we packed in there did not have to be moved twice! Then we moved everything from the east to the west, the installer laid that carpet, then overnight we moved everything from the west to the east..we had to call my brother and one of our nephews to help move some really heavy items that Far Guy and I just drug over the sub-floor..but could not be drug over on the new carpeting. The next day the carpet installation was completed and furniture was moved back to where it might possibly belong. Since then I have been trying to get everything out of the bathroom..finally success. It is presentable up here now.. here are the previous photos. If you care to look at them.

The best part of this entire project..no more slivers in the Grand kids toes and feet from running up there without their socks on. No more micro surgery on the kitchen table with someone screaming that they are sorry that they were running. 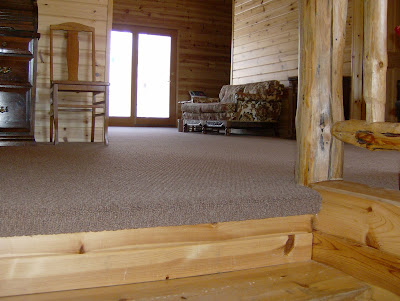 View from the stairs. 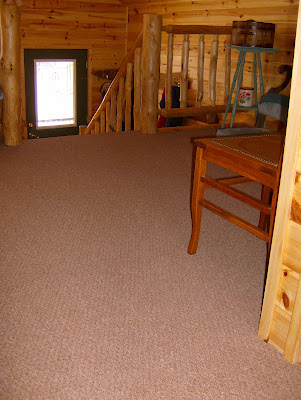 This is the real color! Brown! 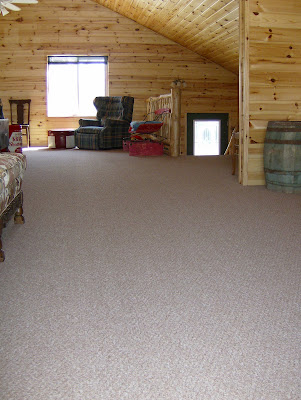 View from the French Door..you may note that something is missing..the huge Oak Cabinet..It's treasures were packed away, Andy and Jen moved it to the garage for me..in it's place a custom pine cabinet with glass doors flanked by two window seats will be built. The design is still in my head..but is coming out in bits and pieces, and Far Guy is trying his best to visualize what I want..and making my design a reality. ..or something really close to my reality. We will build it when the weather gets just a little warmer. Far Guy is finally trimming out the windows up there..it is in progress..I will post that project when it is completed!
I still feel like I need a decorator.. for the placement of the furniture.. I attempted some new things..but eventually I just moved the old stuff back in the same old place. It could be..that I don't have the right combinations of furniture ..that happened to me downstairs..until I purchased new furniture specifically for the space. Possibly it could be the new disease..new carpet new window treatments new furniture syndrome..I just got the real measurments for the windows..one thing at a time:)
Posted by Far Side of Fifty at 9:39 AM

Labels: I have waited almost 9 years for floor covering up there, we were so tired of moving furniture, What a relief

Connie it looks real nice. I know you are proud to have the carpet down. No more splinters in toes.

The carpet makes the room look nice and cozy. About furniture placement....I noticed the sofa and upholstered chair are not grouped together. I would try putting them together to make a conversation area. I think your combination of furniture is fine you just need to play with it a little longer to figure it out. It will come together.

I love your house! My goal, before the economy tanks to a big ****** is new carpet for house and tile for the kitchen. I keep saying this, I have the money, PLEASE! I understand what you are saying when you say now for the next step!

I hate how projects always seem to take longer than you plan!

I commented at the Altered book site - but am frustrated that you haven't received any more books from Susan. I've e-mailed her and never received a response. Should we just request that she pass the books on regardless of finishing them?

What a beautiful, cozy spot now with the pretty carpet. I love it! It will be fun to follow your progress as you make changes along the way. Enjoy!

It looks wonderful. So welcoming!

Great choice of color!! I take it the installers don't move furniture?? That's a bummer. Looking forward to seeing all the progress as it happens.

When my husband has a project to finish it takes him 5 years and 3 hours. Something like that anyway. your upstairs looks great

It looks so nice Connie. So warm and homie there, but your home was always homie, because of you and Gene.
Love you,

Connie, I love how the room looks with your new carpteting. It looks so inviting!:)

wow, i love all the piney wood in your house. it's like living in a cabin!

I love it Connie....your place is very nice! I love the tongue and groove boards on the walls and the carpet just ties it all in. I will have to share my sons room "redone" sometime. I have a slide show of it all. Do you live in a log home? I love log cabins...we have many here in Maine.

Beautiful, it looks absolutely wonderful! I can just smell that "new" carpet smell. :-) I am sure you are VERY happy it's finally done.

I love your house!

I am loving it! It looks great.

But I don't know if I should show it to Gar. He still wants deep inside of him to live in a log cabin, and this might bring that dream back to life. LOL

it's a domino effect. Change one thing -- it knocks you into the next project that you didn't know needed doing.

I love the place. it's wonderful.