Hey! It is I ..Chance the wonder blogging dog. Far Side says today is MY day! Finally my turn to tell you about...

My friend Hooch and the secret he told me.
It went down like this: ARF ARF K-I-T-T-Y GRR GRR C-A-T That was way last November when he shared his secret. Half the winter I have wondered about his C-A -T. Every time I have seen him it has been so fricking cold that even the snowmen want to come in to warm up. After we have our OUTSIDE pissing contests, taking turns yellowing the snow as two property neutered male dogs do it is time to go in and warm up and play ball games and king of the mountain on the couch. Just so you know Far Side says pissing contests are fine as long as they are outside..she says if one ever occurs in the house she will build me a dog house outside..and I wouldn't like that so much..so I follow the rules. Anyways back to the secret..Hooch and I have not had time to go exploring together until now.
Hooch found the elusive K-I-T-T-Y GRR GRR C-A-T 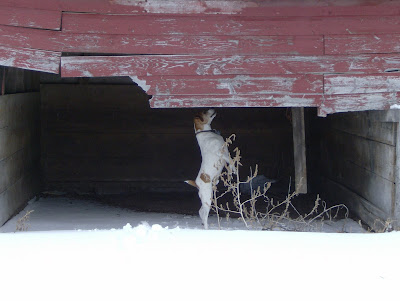 Too bad he ain't taller. 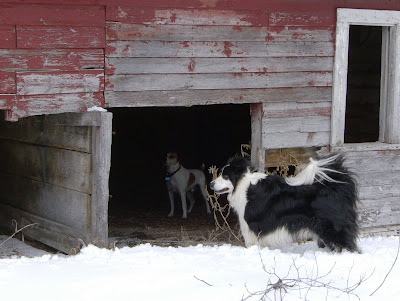 You gofer it Hooch..I'll stand watch. Just in case he makes a runfer it. 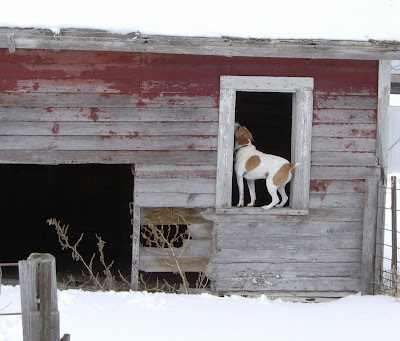 Good Idea Hooch..try a sneak attack with the old doggie in the window trick. This is why we are friends..Hooch is so smart! 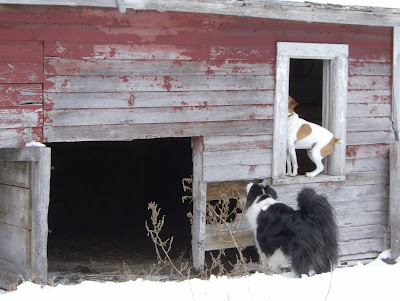 I got your back Hooch..after all what are friends for?
No kitty cats were harmed or even found..Hooch may have been telling a tall tail:)
Posted by Far Side of Fifty at 10:19 AM

I love these action shots!
I love cats, too, so I am glad to hear no cats were harmed.
Dang, now you got me wanting both a dog and a cat now again....
The Retirement Chronicles

This is so funny to me! Thanks for the laugh Connie.

Such a cute post. This is my first visit to your blog and I like what I see. Love Hootch. My dog is Buddy.

By the looks of it, I'de say a short tail.
Too funny! This was fun to read.
BTW, how much for doggy in da window?

Love those photos with Hooch in the window!! And it's always a pleasure to read Chance's guest posts!! :)

Hooch appears to be a Terrier, Chance, being a reasonble collie someone should tell you that those terriers can be quite prone to hyperbole.

I recognize that Jack Russell Terror! with Chance! My Obie is a russell. Love, love, love...Chance....the name...the dog...everything I have heard and seen about this guy...especially when you mentioned that he is in tune with Far Guy when he is not feeling well and coaxes him to the couch. What a sweet heart this boy has. If I ever get a playmate for Obie, I am going to name him chance if it's a boy. Funny...Obie's brother, Ziggy, lives with MY brother in Nashville. Obie occasionally "writes" to Ziggy or emails him...depends on how he fleas...I mean feels! Great post....you MUST do more of these!!:)

In response to the comment you left me - I'm not sure what I'll do as far as a new photo challenge goes. I have a few different ideas but may wait until my summer break to get started, the end of the school year is always very hectic. I'll keep you posted!
I've missed you too!
Martha :-)

hilarious... maybe we should set up a "playdate" with manker aka the B&B dog

I love coming here, this blog, for an always entertaining visit. Your dog is delightful and how you respond to Chance is just perfect. I hurt for your husband. Pain like that can not NOT be good. I wish I could send some magic your way...a acpuncture needle or two to use at the right spot or time, a herbal whatever, the just right Doctor who knows the answer. I wish I could, oh how I wish I could.