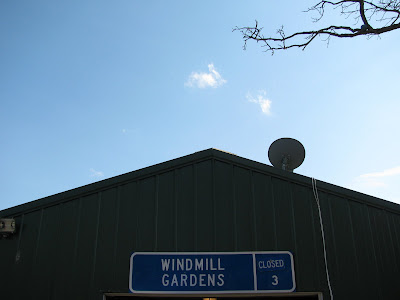 Ten years ago, we purchased one of those big ole blue highway signs to direct people to our business. That sign was one of the loose ends I needed to tie up. Far Guy said he could take it down for me, I thought better of that idea..there is a $700 fine for tampering or destroying those signs. Not that taking it down would be destroying..but tampering..maybe. I finally called Ollie ( we went to grade school together), and left him a message, MN DOT took it down, and delivered it to us. Well, since I paid $300 for this sign, it needed to go someplace...I am way against nailing stuff into trees..ouch. Far Guy graciously agreed it should go above my garage door, he tried to decapitate me with it only once during the hanging. He cussed, he had to switch out screwdrivers, he had to drag the ladder around while I was standing on my tippy toes. You would think, that if your cordless screwdriver always lets you down during a project..that you would just get out the one with the electrical cord in the first place. I was going to suggest this at the beginning of the project..but sometimes I am just silent. I know this may seem foreign to you all...but if I am silent....I do a lot of thinking to myself.. "Oh Lord, not that worthless battery operated piece of crap again." " My arms and legs are not long enough for this." " Hurry up, or the obit will have to say..she died because of short arms and legs..if she looked more like a Neanderthal she would have lived." Far Guy is encouraging... "Just hold it up there for a few more minutes..darling." I think it may have been the darling part.. :)

Labels: Far Guy is so sweet, projects outside

That is cool you had your own business, and a garden business at that!

Glad you got to hang your sign and lived through it! The two of you sound a lot like Nalley and me with a project! It's when he calls me by my given name that I know I have messed up!!!

Hi shorty,
First it was farguys idea about tying the rope around your neck in case you fell into the culvert, then he almost decapitates you. Does he have something against you keeping your head? I admit he is a smooth talker though.

My same feelings toward my electric drill, It is fifty bucks to replace the charger and they have changed the style of battery on the new ones. I guess it all will be thrown away and time to buy a new drill. Do you miss your business, just a little.

Larry, I do miss it somedays..I will blog on it someday soon:)

I'm glad you got to keep your sign...looking forward to the blog post behind that story! :)

The story behind your business, that is...my typing was a bit behind the thought in my head. ;)

Sometimes it is best to just bite your lip and let your man take care of what he thinks will work and in your case, hang a sign his way.
I do that too. Just keep quiet and not start whining!
Glad you have your sign back!

Hilarious. What a smooth talker Far Guy is!

it looks great on the barn. and as another short-legged, short-armed person, may i say, bravo!

Your guy and my guy sound the same. My task is to hold the ladder so he doesn't fall OFF again. Oh, my aching arms and legs!!!

(short arms... as in T-rex? That was the nickname of a young woman I knew who had unusually short arms.)

You are a wise woman. I need to keep silent and just let my mind wander.