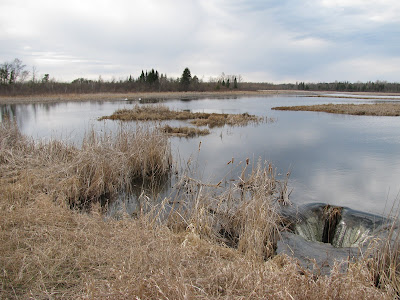 Up the road a piece there is a wildlife area, a slough. I have named it Swan Pond. It is located right next to a highway, but there is a safe place to pull off of the road to view the birds or to take photos! I have named the Canadian Honkers Ole and Lena. 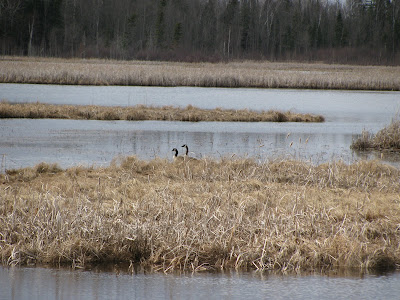 I was watching for quite some time. Traffic does not seem to bother them. They "Honk-AHonk" occasionally. Then all of a sudden they got very, very upset. They got company..an unwanted visitor..Lars. He flew in and landed. 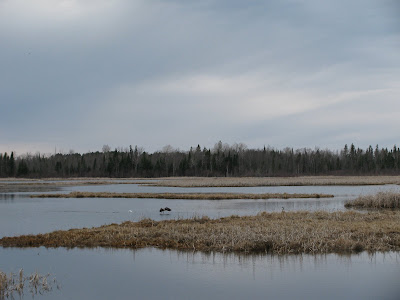 Ole took off into the water after Lars..AHonking many warnings. Lena stayed on the island..then she pitched a real fit. Apparently Ole was not doing a good enough job of thwarting advances by Lars. During mating season male geese are supposed to defend their territory, their mate and the nest..in just that order. Lena should have just been concerned with the nest...maybe she has not laid her eggs yet..or maybe she didn't read the same book as I did. Maybe she was REALLY hormonal and cranky. Ole and Lena both took off after Lars...it was nasty.

Lars flew back in by himself, then in came Ole and Lena as a pair. They flew in between Lars and the nesting island and landed.

They are all quiet now, Lars swims in the distance, while Ole and Lena swim to the Island and once there they huddle close together and preen their feathers. They preened and preened, Lars swam and swam..everyone was quiet.. I have no idea what they discussed in flight..but apparently Lars got the message. 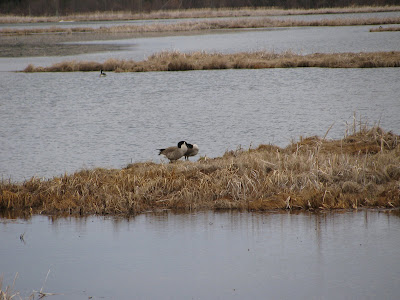 Far Guy and Chance watched from INSIDE the car, Chance was curious but he watched quietly and never barked. He did roll down his window to get a better view. Far Guy kept saying..I hope you got that:)
All Photos taken with Canon PowerShot SX110 IS (Click on photos to enlarge them)
April 22: I heard one lone Loon on the lake.

I love to watch our honkers. I could "waste" a good part of the day just watching them and the other wildlife. From years of living on the pond the girls have figured out how they communicate to one another. We can set our watch to the geese landing in the evening.

What a funny post! So glad they worked things out with Lars!

Great pictures Connie. That must have been fascinating to watch. You sound a lot like me; I name all the animals around here (and some of the neighbors too!!!) Hope you both are having a good week. Harriet sends a smooch to Chance!

Wow, they blow up really clear!

NICE PICS CONNIE - I USED ONE FOR BY BACKGROUND! JO

When I see something that exciting happen my camera is no where to be found. Nice shots.

Great photos. I especially like the 4th one. The action is superb when you enlarge it to see the detail. That new camera is working just fine I see!

We used to live by a pond and I enjoyed watching the geese and ducks in the spring...it was like a soap opera. I was always amazed at their behavior.

I love your play by play description of what was happening with the geese.
Nice photos too!

Loved the commentary on Ole and Lena and Lars, LOL. We have a pair that keep coming back to our pond lately, so I'm wondering if they're going to set up a home or not...