Old Photo and a Duck Story 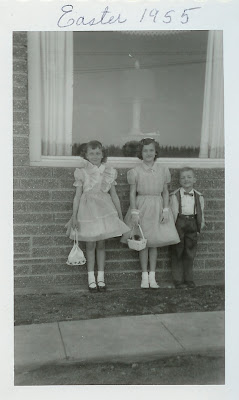 Far Guy and some Easter Chicks! I love the fancy frocks and the little purses.. and Far Guys sister has gloves on! Far Guy says the girl on the left is cousin Bonnie. I am not so sure..where is her brother? I am also wondering why in the world Far Guy needed a belt AND suspenders. He did wear lots of suspenders..so much so that in grade school the other kids called him "Spenders" ...don'tcha just love that Bow Tie! He was one stylin' dude when he was five!


In the late 1960's Far Guys Mom must have been going through some type of personal crisis. Maybe she was in some sort of irrational menopausal mood..she bought two ducks ..one pink and one blue. This was back in the days when it was acceptable to dye the poor little things. There was some sort of Duck Tragedy that year, Far Guys Dad may have been involved. There was only one fluffy duck one day.. It followed Muggy around, he was a Chihuahua with an attitude and the last thing he wanted to be was a mother for a duck. I recall that Far Guy and I let the duck swim around in the toilet one afternoon, Far Guys Mom had a "cow" it may have had something to do with the other ducks tragic death ..she loved that little duck..it went to Emil's next door to grow up to be someones dinner..:)

I remember dressing up like that with the little purses and white gloves and I had a little duck and strangely disappeared right before thanksgiving. Hummmm.

Connie - what a story about the duck. Love the old photo taken the year I was born. Cool.
Happy Easter.

What a cute little thing far guy was! Love the old photos :-)

Love the outfits everyone is wearing.. thank goodness I wasn't born in that era as I don't like being constrained like that... but they all look so sweet!

Someone was really paying attention to picture taking! I love that they wrote the year and Easter on the photo. Have you and Far Guy known each other since you were kids?? I guess I missed that part of your life in the blog! Colored ducks?? I didn't have a clue about that! Great stories you tell....keep up the great work and Hoppy Easter to you and Far Guy. By the way...why is he called Far Guy? Inquiring minds want to know?

Far Guys Mom and my Mother both wrote in ink on their old photos. I officially met Far Guy when I was about 12 or 13. We went to High School together. Yes, we were High School Sweethearts! His Maternal Grandparents lived just kitty corner from the farm where I grew up. I had to call him something when I started blogging back in December of 2007..so since I am Far Side..he became Far Guy. Locally we have an area blog and we have a Buffalo Gal and Guy, and a High Gal and Guy. So it just seemed to fit..now everyone calls him Far Guy..even relatives!
Years ago Ducks and Chickens and even Bunnies were dyed all colors of the rainbow and sold just before Easter.. animal activists took this inhumane behavior to task and it became a thing of the past. :)

I always wanted one of those dyed chicks. Do you remember the painted turtles? We had one that got away. I think mom found it behind the fridge when we moved.

The Duchess has old movies of her and her brother chasing little chicks around the room that were dyed pink, blue, and green!

I had those Easter outfits when I was young -- hat, patent leather purse and shoes, gloves, socks with ruffles. What I lusted after was one of those nylon party dresses. Mine were all plain, sensible cotton and Mom refused to be moved by my pleas about the other little girls. I got the old, "if all the other little girls march off a cliff..." line. Sigh. I grew up congenitally unable to wear frothy clothes.

My kids would love to see artificially colored ducks. Love the photo!