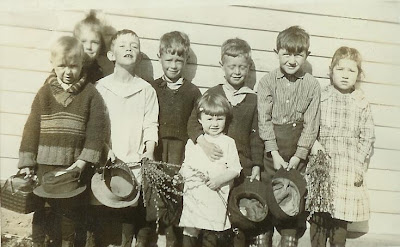 What a wonderful looking bunch of kids in 1920! I love the way the little boys took off their caps for the photo. Far Guys Dad was six years old, this might be the first grade class. The littlest girl probably doesn't belong to the class, as her brothers arm holds her in place. Far Guys Dad is the boy on the right in the striped shirt. The little boy on the far left has a lunch box, and several of them have pussy willows.
*************
Legend of the Pussy Willow
One day in early spring, a mother cat and her kittens where exploring the forest along the river near their home. A beautiful butterfly drifted past them and over the water. The kittens, being young and inexperienced, leaped into the air to try and catch the butterfly, but instead landed in the swiftly moving water.
The mother cat cried helplessly while her young kittens struggled against the current. The kittens were having a hard time, and she was afraid they would soon drown.
Along the banks grew a wise willow, with graceful branches that bent all the way to the water. The willow, seeing all that had happened, bent its branches further into the water to try to rescue the kittens. Each kitten grabbed with its sharp claws, and was pulled gently to the shore by the willow.
To this day, the willow is honored for its heroic deeds by the tiny fur-like buds that sprout each season as the rivers start to run in spring. (Polish legend)
**********************
It is just about time for the pussy willows here in Minnesota, they are native here (Salix discolor) a shrub that has soft grey catkins of the male flowers. Pussy willows can be found in other northern states and in Canada. Pussy willow a Minnesota spring alarm clock! :)
Posted by Far Side of Fifty at 11:19 AM

Pussy willows are so very much the ringning in of spring. Nice children. And thanks with that right left thing, I am very bad at right left.

The two boys in the center look like they could be twins. Love the lunch box, cute picture.

I love that story about how pussy willows got their name.

Oh my goodness... that is a priceless photo. Isn't funny how times have changed. Those were perfect little gentlemen. I will have to show this photo to my son with hopes he will remember this next time he takes photos with friends.

Happy Spring to you Garden Friend.

What a terrific photo - love the lunch box and the armfuls of pussy willows. I had never read the legend of the pussywillow. How quaint. I really enjoyed this post.

Thank you for sharing this photo. As always, I love your photos. I need to look through mine again!!!

I love this post! I love the story. Thanks for stopping by my blog and leaving comments they are appreciated always!

That's such a sweet story and a cute picture! Life was so much simpler and sweeter back then, wasn't it?!

I always look forward to these old photos...there is just something about them that grabs at me, ya know? And what lovely story. :)

What a terrific photo - love the lunch box and the armfuls of pussy willows. I had never read the legend of the pussywillow...we have pussy willow here too.. lovely to read the story..
Julia ♥

I didn't know that legend of the Pussy Willow.
I always enjoyed picking some in the spring for my mom.

I have some photos of my moms first grade class -- I keep thinking I'm going to post the old stuff and never get around to it.

Well, I have finally joined in again!!http://contrarywoman.blogspot.com/2009/03/tardy-thursday.html. I at first indicated your blog as Far Out At Fifty and then realized my blunder!! But I kind of like it!
Mary

PS I love this photo of Far Guys Dad.

Great old photo...I love those and what a neat add-in to your blog that is. We have pussy willows up here in Maine. They become part of bouquets here. Some people cut them and put them in tall vases...very elegant and we love them. Nice blog...I guess I missed why you call your hubby Far Guy...but it's really cute. I've been busy and not able to blog too much but glad to be back as a regular for a while. Yours is one of my favorites as it is always interesting. Thanks for the pussy willow folklore.:)

What a beautiful story. I'll think of it every time I see a pussy willow.
I loved the old photo too.