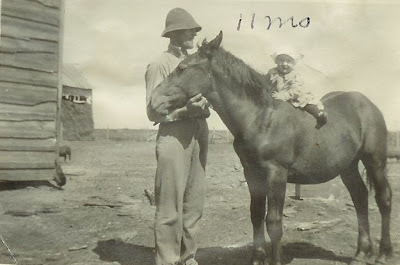 Trust, that is what I believe this photo conveys. Grandpa H is scratching the horse with one hand and holding onto his son with the other. Far Guys Dad is smiling and having a good time. The horse doesn't have a halter on or anything, obviously the horse trusts his master. This photograph was taken in 1915.

*******
Far Guy relates another story about trust. Trust what your Grandpa and your Dad say, if there is a rule ..there just may be a reason. Far Guy and his cousin Jay were told not to run in the barn, it was a rule. Boys will be boys and they were running in the barn... one of Grandpas horses either Bess or Bob reached out and grabbed Jay by the hair. Far Guy says "We were scared to death, and never ran in the barn again." Grandpa used his horses in the 1950's to get firewood in the wintertime, he would hook up the horses to the sleigh and take them to the woods for the day. They were working horses. Apparently one of the horses had a quirk about anyone running past their stall in the barn.
***************
Some of the old photos have been marked with ink pens, it works, but I suggest to anyone that is marking dates on photos to mark them on the back with a photo pencil. I really like the Creative Memories Photo Pencil , but I am sure that you can purchase them elsewhere. I will eventually restore this photo and remove the ink from the photograph:)
Posted by Far Side of Fifty at 9:58 AM

I absolutely love your photos. What precious tales of old. The "no running in the barn" rule reminds me; my grandpa told my dad no jumping from the hayloft. As soon as grandpa turned his back, daddy jumped and his knee hit his nose really hard. He never jumped again!

I wonder if his Mom was in the background of the photo saying, "you hang onto my baby tight!" Or else.....

Connie, about the comment on my blog, you are so right.

Love the hair-eating horse story! And such a wonderful picture.. it oozes trust!

That picture is lovely, but it doesn't seem unusual, until you realize that there's no halter, or anything! Trust it is! (and by the way, I think nuns have to keep their hair short under the habit-went to a camp run by nuns as a child, and we saw them coming out of the shower!)

I love old pictures, I have a few of our family from the early 1900s - I need to remember to ask my gramma if she has all the genealogical stuff from my great-aunts, who passed on years ago. They (twins) were diligent about keeping track of the Barnes family. I love this photo, it is so warm and interesting! It will look great when you finish restoring it. :)

I can just picture that kid with his eyes getting huge as he's lifted by his hair. Great word pix!

Great photo. You sure have some treasures. I like the stories you add with them just as much.

Is grandpa tall?
I'm short and horses tower over me. But he seems to really tower over that horse.

I love this picture. I have one of my mother on a horse with her aunt standing beside her. A lot of your pictures are so similar to my family's old pictures.

Grandpa was tall..about six feet tall.
Thanks everyone for your comments! :)