Fifty-Five years ago today was a monumental day in my life. I was two and a half years old. My brother was born, I had to learn to share my parents attention. He had colic, he made everyone tired. My parents walked the floor with him for many, many months.
I learned many things by having a brother, how to accurately pitch a baseball while he played either catcher or batter. We played "horse" on our improvised basketball court, we practiced game winning free throws for hours. We played badminton in the front yard. We went fishing and swimming together. We learned to hunt and shoot a rifle together. We learned how to ride a motorcycle as young teens. We learned to drive the old farm truck around in the grain fields. We both joined 4 H at the same time. I guess I am a bit of a tomboy..because of my brother.
In the winter we played endless card games like War, and Rummy. Checkers, Chinese Checkers, Sorry, Monopoly and Parcheesi were our favorite board games. We collected Baseball cards together.
When we got older sometimes we were a bit physical with each other, I was bigger and stronger..so I usually won. We would take turns slugging each other in the upper arms..the first one to cry lost. We played a terrible game, where you spit on two of your fingers and then hit the other one on the exposed forearm..welts would line up on his poor arms. We played the horrible pocket knife game (Chicken) with bare feet, both of us escaped any major stab wounds to our feet..either the knife was dull or we were good knife throwers. We had major arm wrestling competitions..sometimes I would let him win those.
My brother loves sports, he lives and breathes football, softball and soccer. In his free time..he coaches, referees and umpires in the rain..because he lives in Oregon..far away from Minnesota. I miss him some days, like today..when I would just like to grab him and give him a big hug. Happy Birthday to my brother! :) 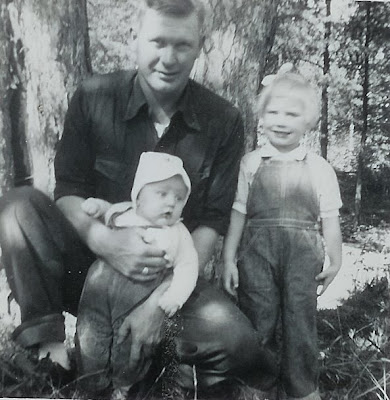 The summer of 1954, our Dad , my brother and me! I was amazed by this photo, I never realized before how much my brother looks like Dad.
Posted by Far Side of Fifty at 9:50 AM

You are such a beautiful little girl. My brother was born in 1952, 3 years younger than I.

Oh - little brother in a sweet hat... Hope he has a good sense of humour...With you as a big sis - he must have!

Throwing knives at each other's feet? I'm horrified (as a parent)...

What a couple of little blondies you are!

What a sweet picture and great memories. Happy Birthday to your brother. Hope you get to have a reunion sometime soon and share photos.

What a beautiful post and happy belated birthday to your brother. I enjoyed the photos.

I don't remember playing hitting games or with knives - but this made my memories swim in my head - all the other things you mentioned.

oh.. and happy birthday to your little brother

We could go give your brother a big hug for you! He's practically in our backyard.....ok, maybe not our backyard.....well, not even our town. Nope, wrong county too...
But we're in Oregon so that's pretty darn close isn't it?
Say Hi to Chance!

nice that you are sharing your memories here.
*** Coy ***

Happy birthday to your little brother! I am one year younger than him and apparently you are 3 older than me. I feel comforted knowing there are other fify somethings out there writing in these blogs! I have 3 brothers...no sisters.:( Love my brothers but always wanted a sister. My little brother is 4 years younger and one 4 years older and one 8 years older. We are all 4 years apart! Weird huh? I totally relate to everything you wrote about him. Thanks for the memories.:)