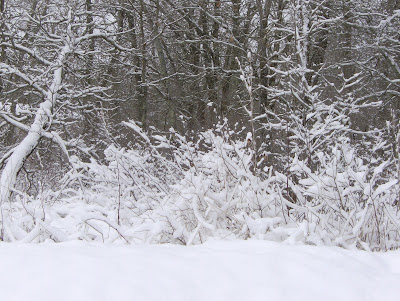 What a week! We had all that running water on Monday, then it snowed..not a lot..but we are returned to a wintry frozen like state again. Spring seems like it will never come. Summer seems like some distant dream.
The flood preparations continue in the Red River Valley. My baby brother and two nephews are now over there working on the dikes. They are all heavy equipment operators. When the flood predictions came out, my first thought was..I just have a few cousins and friends that live in the area..but no immediate family to fret over. Now it is personal.
Unless you have lived through a flood..you cannot even begin to imagine the power of the water, it holds you hostage. It scares you, it occupies your every thought until you have no other thoughts except water, water levels and sandbags.
During the flood of 1997, there was just the two of us, until my Father came to help. We slept in shifts. We patrolled the perimeter. Out the patio door onto the deck where the gas powered pump was sucking water out, past the sump pump discharge that was lobbed over the dike, around the corner past the tulips, to the bucket with holes sunk into the ground to run the sump pump that Far Guy installed inside of it, around the corner to the front, you could breathe a sigh of relief because the water was lower there, into the garage and down the stairs to make sure there were no leaks in the basement anywhere. Then back up to the Family Room to get ready for the next round, a few minutes to warm up before you patrolled again, if you sit down and get too warm you might fall asleep. Every forty five minutes the gas pump needed gas, at night whoever was sleeping would be awakened if you were late with the fill and the motor died from lack of fuel. The sound of that gas powered pump was security.
About day 20 or so. Far Guy insisted that I leave. My Father would man the dikes while we boated to the vehicle, and went out to dinner with my Mother. I was away from the water..I had good sea legs..I was so used to seeing moving water in all directions that seeing no movement and no water on the dry land outside of the restaurant made me nauseous. Everyone in the city seemed so normal, traffic was flowing, the sun was shining, there was no water to watch..how could they all laugh and be normal..when I was going to return to a watery world just a few miles away. Didn't they know, and if they did..did they care? Not after the danger had passed for them..they were all past the worst of it..they wanted to put it all behind them..well I did too..desperately. It took a really long time for our water to recede..many, many days..day 42 was a good day, the small lake we lived on was finally back in its banks.
Twelve years later I still have bitter feelings toward the media, who forgot about outlying areas, small groups of houses that were all Islands. Sight seeing people in big honkin boats that sped by and caused the wakes to go over my dikes. The Red Cross that left me a jug of water, a pail and a mop..but never a sandwich.
We sold that house a year later, it was only on the market for a week and it sold, and when we showed them the flood photographs, they wanted the house anyway..they were young. It was a beautiful place to live, near the city, but with a country feel, with many wonderful neighbors. I miss that house sometimes..but never in the spring when it floods:(
Posted by Far Side of Fifty at 11:26 AM

I have never experienced flooding, but can imagine how horrible it is. I don't even swim, and water terrifies me. I pray for your family members and others helping to make things safe for everyone.

What a story!! I also have never experienced flooding and never, ever want to. What a terrible ordeal to go through. Boo on the Red Cross. Sounds like they did a half-assed job on that one.

What a hard thing to live through.

Winter won't let go of its grip hey?
I've been reading other blogs that have experienced the Red River and it is amazing to read about. Our area is lucky to not experience such catastrophes.

Your story brought tears to my eyes. I'm glad you are safe this time around. Did Peace Garden Mama get out in time? I've been praying for her.

Peace Garden Mama was safely in Minnesota at 11:13 AM according to her blog..her and the ducks!:)

so why didn't you loot and shoot?
(sorry, just couldn't help myself - as that was the modus operandi in the big hurricane a few years ago)

This whole thing is just so frightening and awesome at the same time.

The Community College I worked for so many years ago was built in a low-lying area on the banks of the Great Miami River. The library, the gym and the music rooms were all built well below ground, and people used to worry that the river would overflow and flood them. It never has (Dayton built 5 dams after a massive flood in 1913 submerged our downtown area beneath 20 feet of water), but while I worked there a water main broke beneath the street that separated us from the river.

The water filled up the bay outside the receiving doors and when the water grew heavy enough, it literally twisted the doors off their hinges and then roared through all the basement and sub-basement areas. The library had a green area in the center that grew beneath skylights -- there was bark chips and potting soil strewn everywhere.

As soon as they pumped the water out of the library, I spent the next week layering sheets of waxed paper between the pages of all the books that had gotten wet. The local air base had offered to freeze dry all the books, but the pages had to be separated so they wouldn't stick together.

So, although I've never had my home flood (well, I have a wet basement, but it's unfinished), I feel your pain!

winter here also still has us in its grips in mt. and i feel your pain about "residual fear" and all the "stuff" that goes with it