I Heard It On The Radio

Far Guy and I learned in 1997 that connections are what keep you going during a flood. Our connection to the outside world was email, phone and the radio. We listened to KFGO out of Fargo. We have been listening to KFGO online this time also. They have been taking phone calls, from callers. Many people have questions..KFGO is the place to call if you need an answer.


What I have heard over the past few days:

Briarwood needs a porta-john, Larry needs a jackhammer (someone called with one for him to borrow), a dog was lost, a dog was found at one of the dikes, an elderly lady had baked 200 oatmeal cookies and wanted to get them to the sandbaggers, someone with a bread truck full of loaves of bread wondering where he could take them, people have extra sandbags..some are even filled with sand, some people have dry storage space to share, people outside of the area call in and offer to take in strangers with pets that are displaced, two large dogs were found, what roads are open out of Fargo, people call in with pleas for sandbaggers, they are shutting off the water to Oakport, there is a fire at Oakport..an elderly couple lost their home first to the flood and then to fire last Friday, Oak Grove Campus is getting water, hundreds have showed up to help fix a breach near El Zagel, Briarwood got their porta-john (one was on the way within twenty minutes of the plea), an emergency animal shelter is being set up at Jamestown by Kay from Prairie Paws Rescue, West Fargo has an animal shelter set up at the Fairgrounds, Horses could be taken to NDSU..but they needed hay and people with trailers to help transport them, a guy from Bemidji brought down some pumps and hoses and will give them to the first people that show up at the Burger King in Moorhead, Jessica calls often, seventy horses were eventually moved, she needed halters and more lead ropes, today she need a water tanker truck so the volunteers don't have to carry water to the horses, from what I understand many animals are safe at the fairgrounds..donkeys, horses and even a pot bellied pig, people from as far away as New York call to thank them for their 24/7 coverage of the flood, many people call with the question..who do I call for??..and they get answers with phone numbers. Like they say, if someone has a question or a need, if they don't know the answer one of their listeners will, and their listeners are good people and will share their resources.


My brother and his son are still over there, he his helping to build secondary dikes. From what I understand he was at Centennial Soccer Field in a twenty foot hole, bringing up clay from the bottom to the top. He drove back home to sleep. My other nephew spent some time in an area in South Moorhead building a dike with Firefighters and Guardsmen.


Here are a few photographs that my nephew took on Saturday in Moorhead, Minnesota. 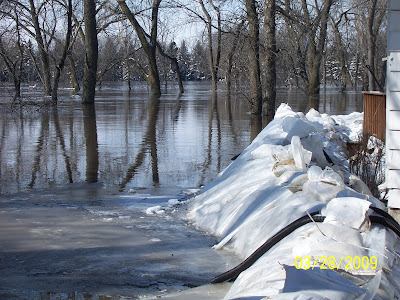 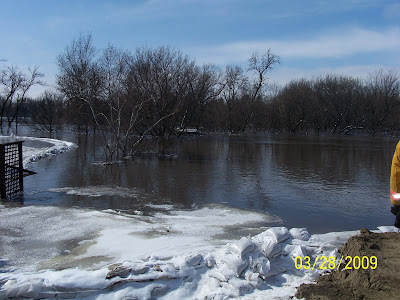 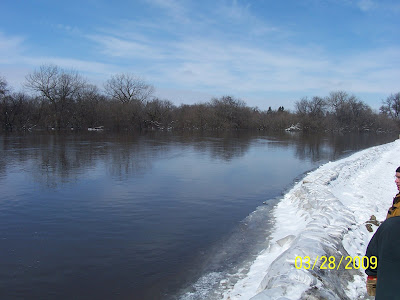 They are not out of the woods yet, they are in better shape than many feared..a winter storm is heading their way. They will be in a high state of alert for a number of days yet..maybe weeks:(

Oh, my goodness! And I complain. Makes me feel small.

Yes, I saw the winter forecast on the news earlier. I hope it doesn't hit as hard as feared.

And you're right. When my DSL has been working the last few days, email and the bloggy world have been my lifeline. Our generator has allowed us to watch TV and keep up with the news. Other than that, you can begin to feel a disconnect when you live in a rural area and essential communication is down!

Wow...apparently I have been out of the loop here! I didn't know how serious you folks are having it there. I will say prayers. We have had our shares of floods and ice storms and major power outages here in Maine so I can totally relate and it sucks! When you get the power back you thank God 100 times for this miracle! Glad you are ok and I hope you are all out of the woods soon. Glad you are able to get online though. Isn't it wonderful how people pull together to help one another in crisis like this? The human spirit is amazing!

We are 90 miles AWAY from the flooding..safe and sound..but I am sure our neighbors in the Red River Valley would appreciate the extra prayers! :)

Oh and my brother is home safe and sound too..but tired..it was good to see his ugly mug this afternoon..even though he drug his muddy boots with Red River Valley clay in the house with him:):)

It isn't easy fighting the forces of nature. My heart and prayers go out to everyone who is scrambling to stay safe and help others.

Thoughts and prayers are with Fargo -- hope the coming winter storm is a non-event.

My prayers are offered too.

Isn't it just so sad...
I watch the news and see the dedication, the community and volunteers working so hard together.
I hope they beat this new onslaught of weather that is called for!
Our Son lived there until Christmas and he's been staying in touch with his friends there. Wishing he were there to help too.
He said the Red River is so "small" normally, you hardly notice when your cross it!
Now look at it....
I feel for those people and OMG in such cold, cold conditions too!

Oh my - that's some serious flooding over there! But how comforting that people are pulling together to help each other.

I have been watching the snowstorm on its way there. They sure don't need THAT!

Unbelievable. I couldn't imagine! Our local charter school sent students and teachers a few different days to fill sand bags. I was very impressed that they would do that...no better education than showing kids what real life is all about!

This takes me back to last September and our aftermath of Hurricane Ike, down here in Houston. Neighbors pulling together, even when you didn't know each other - just helping others in the same fashion as you would want to be helped, yourself. My cousin's blog is The Retirement Chonicles, and I guess that is where I pulled your blog from.