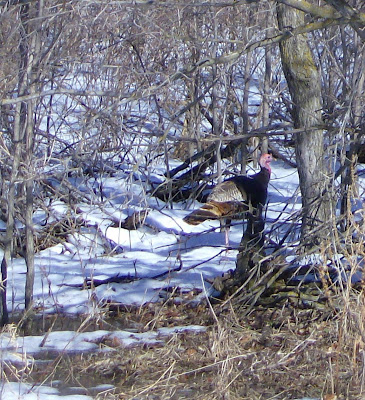 I have been in pursuit of this Wild Turkey half the winter..finally success! Far Guy has been so patient..taking me by the Turkey area. I caught them in March..but then I lost those photos (and they were damn good ones too) so we had to venture out again. They are just down the road a few miles..the snow is too deep yet to venture into the ditch. The Wild Turkey season starts here soon, April 15th I think...these guys will be easy to hunt. They are wary of traffic..one day Far Guy lost all his patience with me and Chance, I was hanging out one window trying to get some photos and Chance rolled down his own window AGAIN and began to bark..and a car came down the road. Far Guy hollered "Chance quiet down! Here comes a car..we are all gonna die ..but SOMEONE can take good pictures of the crash with your camera! " I have a ritual..Camera in action mode and ready to shoot.. I open my window..Far Guy zooms into position with the car and I snap photos like mad. Turkeys scatter everywhere..

Far Guy called me a "Turkey" the other day. I was visiting with an individual. I had heard a rumor that he and his lovely wife got a divorce. So I asked him straight up.. " I heard a rumor, that you and the wife got a divorce? " He was stunned, as he has been married a long time..rumors ..they were just rumors..who starts them anyway..well who ever does..I don't repeat them and If I hear one about you, I will ask you the next time I see you..so I can tell the next person that wants to tell me the same juicy gossip that they are NUTS. This was all very embarrassing for Far Guy...poor guy..stuck with a "Turkey" for a wife..who squashes wild rumors:)

Labels: In Pursuit of Wild Turkeys, Wild rumors in a small town

You make me laugh! We have a wild turkey in our neighborhood that will walk right up to your car window and look in!!! I need to start taking my camera with me everywhere I go! Hope you have a good day!

lions and tigers and bears oh my... our neighbor has a bull which our "girls" (the mares) swear it's a horse eating lion :)

I know what you mean about stalking some creatures to get a good shot... I've been hoping for a good pheasant shot since I moved here. I hear them all around us, and see them from time to time, but no photo yet! Aren't our hubbies so forbearing when it comes to our crazy photo antics?! I went outside the other day to snap pics of our pasture burn, and hubby stopped his chores to bring the "limo" (truck) to take me around for the grand tour. :) Then he had to stop to get ready for work and he didn't get as much done that morning as he wanted because of the grand tour... he's so sweet that way. And BTW, we are hoping we don't get a big bill from the county, fingers crossed, nothing yet.....

You two are so funny! This reminds me of a friend of ours who saw a deer along the road. He got out of his car and started sneaking up closer and closer to the dear then he pointed his camera and snapped a picture. Suddenly, two conservation officers came out of no where,they were laughing at our friend. They told him the dear was a fake and it was set up to catch poachers! He felt like an idiot.;D
Have a good day!

Oh,funny! I love to have my camera readily available when driving. You never know what you are going to come across (and it may make a very good blog post.) The scary part is when I get bored and start taking photos of myself when driving quiet back roads in South Dakota!

Haha, a good laugh this morning!! Pretty good pic of the turkey, too. I always figure if you want to know if rumours are true...ASK:))

Great shot! We drive the Natchez Trace pretty regularly and always enjoy spotting turkeys -- the ones out in the woods, not the ones pulling unstable-looking boats at 15 miles an hour, although that probably is the proper speed if you're afraid your point might take off flying, I guess.

Your method of handling rumors reminds me of my own -- except I'd probably tell the rumoree where I heard it.

There should be MORE of them.

Tell that guy of yours that from me! :)

You go girl---stopping rumors is a good thing.

Good for you for squashing rumours! I can't stand that kind of gossiping either!

And well done for snapping that wild turkey... have never seen one in the wild before.

Popped over, curious, from Jen's lovely post. I can see why she featured you ... your site is delightful. Love wild turkeys. In fact, heading up north to our cottage shortly where wild turkeys rule ~ part of the turkey trot (often have 50 strolling across the lawn). Have yet to taste wild turkey but they make my mouth water ... thinking of sprinkling a trail of seed into my oven :) Happy Spring and thanks for the delightful visit!

I'm with you on the rumor-quashing!

I dropped by after reading Jen's post too. I've enjoyed visiting your lovely blog.

Far Guy should be glad he has a great Turkey who calls it like she see it. Good for you. Great turkey shot too.